Over the past decade, the McFarland Center for Religion, Ethics and Culture has hosted lectures and discussions that can help us think about our vote, complex issues in the race, and finding common ground. We've put together a playlist of videos and audio podcasts of those events.

Each week leading up to the November 2020 election, forums with guest speakers, featured faculty and student panels discussed some of the issues at stake. Watch them here. 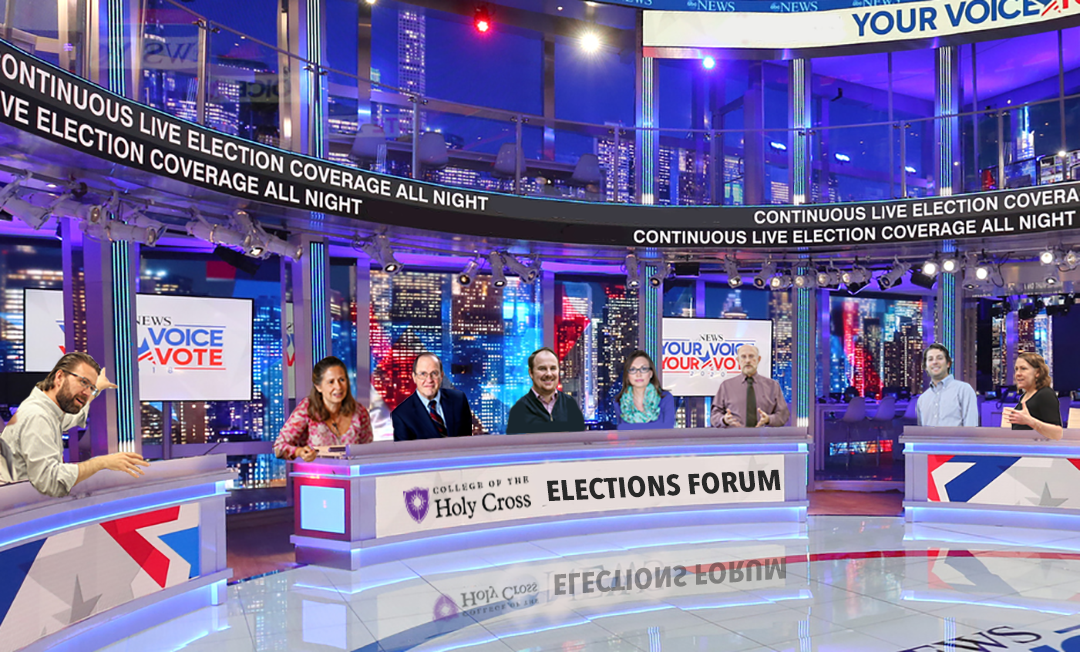 Post-Election Day Political Science Roundtable
November 4, 2020
Moderated by Daniel Klinghard, professor of political science and director of the J.D. Power Center for Liberal Arts in the World, the discussion addressed early indicators in the 2020 vote results, possible outcomes and their consequences, the Electoral College, voter turnout and suppression, and what comparative analyses can tell us about the U.S. political system.
Note: This event was held before the presidential race was decided.
Watch the discussion»

Election 2020: Bringing Holy Cross Values to a Polarized Campaign
The Alumni Office and the J.D. Power Center for Liberal Arts in the World hosted a two-part webinar series in October aimed to explore the election through a balanced Holy Cross lens, rooted in our mission and values. Watch the videos online:

Justice for All: Filling the Seat on the Supreme Court
October 6, 2020
Holy Cross political science majors Natalie DeCoste '21 and Grace Burke '21 moderate a discussion with Professors Alex Hindman and Greg Burnep on recent Senate confirmation hearings, what could be ahead for Trump's nominee Amy Coney Barrett, and what a shift in balance could mean for pending and future cases.
Watch the video»

What is a Moral Foreign Policy?
September 29, 2020
One of the world's top foreign policy experts, Joseph Nye joins us to discuss his recent book, "Do Morals Matter? Presidents and Foreign Policy from FDR to Trump."
Watch the video of this forum»

What is the government's role in ensuring the health of its citizens?
Monday, September 21, 2020
In this forum, Holy Cross Professors Melissa Boyle and Tsitsi Masvawure show how the U.S. spends more on healthcare for poorer outcomes than other developed nations. They explain differences in the parties' platforms and actions to provide affordable and accessible healthcare to Americans and suggest why we should care about improving healthcare equity and access. Watch the video»

How Then Shall We Vote

Catholicism, Citizenship and Conscience: What Does it Mean to Be a Faith-filled Voter in Our Polarized Society?
October 16, 2012
San Diego Bishop Robert McElroy explores the nature of conscience and our obligation to call upon conscience in our voting decisions.
Listen to Bishop McElroy's talk on Apple Podcasts»

Dare We Hope for Common Ground?
October 4, 2017
Julie Hanlon Rubio, professor of social ethics at the Jesuit School of Theology of Santa Clara University and author of "Hope for Common Ground: Mediating the Personal and the Political in a Divided Church," draws upon moral theology and Catholic social teaching for resources to find common ground with those with whom we disagree politically. One of the Deitchman Family Lectures on Religion and Modernity.
Watch Julie Hanlon's lecture online»

Teaching Controversial Issues in the Age of Trump
September 29, 2016
Jonathan Zimmerman, professor of the history of education at the University of Pennsylvania, traces the history of teaching controversial topics in public schools and the restrictions placed on teachers' First Amendment rights. Co-sponsored with the Education department.
​ Watch Jonathan Zimmerman's lecture»

Digital Deceit: The Economics of Internet Platforms, the Spread of Disinformation, and the Way Forward
October 17, 2018
Dipayan Ghosh, a Shorenstein fellow at Harvard Kennedy School, explains how the business model of social media platforms enables nefarious actors to exploit the technology to undermine the American political process.
Watch the video on Digital Deceit»

Moralities in Conflict: How Health Care Became Such a Hard Problem for America
February 22, 2011
Pulitzer and Bancroft prize-winning author Paul Starr, co-founder and editor of The American Prospect, explores why the American people are so bitterly divided on health care policy while other wealthy western democracies are not.
Listen to Paul Starr's lecture on Apple Podcasts»

Reforming Health Care in the U.S.: What Now?
March 11, 2010
Jonathan Gruber, economics professor at MIT and one of the nation's leading health care economists, was a key architect of the Massachusetts healthcare reform and an economic advisor in the development of the Affordable Care Act.
Listen to Jonathan Gruber's lecture on Apple Podcasts»
Watch his talk on C-SPAN

A Green New Deal for Climate Safety and Social Justice
February 17, 2020
Thea Riofrancos, assistant professor of political science at Providence College, outlines the environmental and social justice goals of the Green New Deal and suggests why it responds better to the challenges of climate change than other current and prior administrations' policies.
Watch the video on a Green New Deal»

The Challenge of Climate Change
William D. Nordhaus, Sterling professor of economics at Yale University and winner of a 2018 Nobel Prize, is one of the main economists working on models that address the true cost of climate change. He spoke about it at Holy Cross in the fall of 2009.
Listen to William Nordhaus's lecture on iTunes»

My Brother's Keeper: Closing the Opportunity Gap for Young Men of Color
College of the Holy Cross alumnus Broderick Johnson '78 returned to campus to speak on his roles working in the White House: as assistant to President Barack Obama, as Cabinet secretary, and as chair of the My Brother's Keeper Task Force, which works to improve outcomes for boys and young men of color in this country. A panel of students — Greyson Ford ’16, Jewel Duberry-Douglas ’18, Lance Madden ’18, Isaiah Baker ’16, and Marcellis Perkins ’19 — posed questions ranging from educational policy and STEM initiatives to police-community relations and criminal justice reform.
Watch the video on My Brother's Keeper online» | Check out the Apple Podcast»