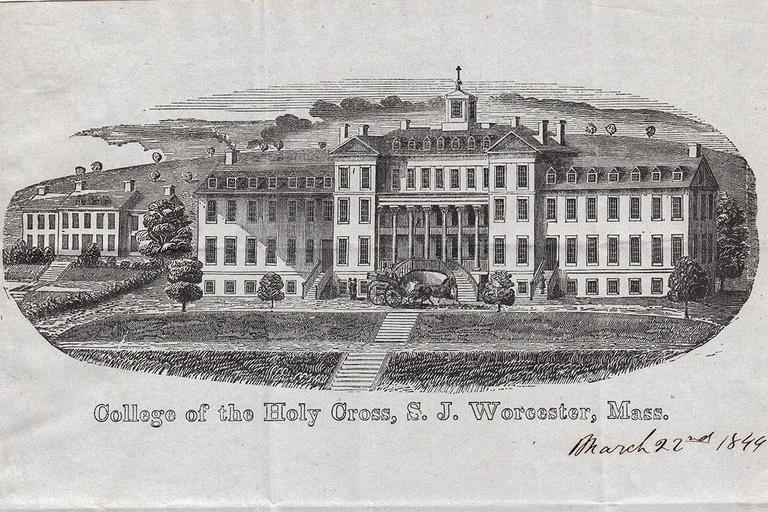 From the beginning of his tenure as the second Bishop of Boston, Benedict Joseph Fenwick of the Society of Jesus longed to establish a Catholic college within the boundaries of his all-New England diocese. Catholics in great numbers, fleeing religious persecution and famine, and seeking economic opportunity, were pouring into the region. He recognized the need to educate them and to provide priests for his growing number of parishes as a major challenge of his episcopacy.

An alumnus of Georgetown College, Benedict Fenwick later served twice as president of his alma mater. As a Jesuit, his religious life had been marked with a certain academic mentality that prepared him well to undertake the establishment of a college. He was enterprising and courageous. And he knew that he could call upon the resources of his fellow Jesuits of the Maryland Province if and when he needed them to staff a school.

The location in Worcester was fortunate. Other sites had been considered, but here, in 1836, Father James Fitton purchased 52 acres of land and began an academy for boys. The academy prospered but Father Fitton’s pastoral responsibilities in Worcester, Rhode Island, and Connecticut left him neither time nor energy to manage a boarding school, and he gladly conveyed the property and buildings to Bishop Fenwick for his college. The Bishop’s letters record his enthusiasm for the project as well as its location.

"Next May I shall lay the foundation of a splendid College in Worcester…It is calculated to contain 100 boys and I shall take them for $125 per an. & supply them with everything but clothes. Will not this be a bold undertaking? Nevertheless, I will try it. It will stand on a beautiful eminence & will command the view of the whole town of Worcester… ."

He gave the College the name of his cathedral church, the Cathedral of the Holy Cross. Father Thomas F. Mulledy, S.J., a former Provincial of the Maryland Province Jesuits and, like Bishop Fenwick, a former president of Georgetown, was assigned to take charge of this project. The cornerstone was put in place with great solemnity on June 21, 1843 and on the second day of November, with six students aged 9 to 19, the first classes were held. The College held its first Commencement in 1849, of which the valedictorian was James Healy, the son of a slave.

Within three years, the enrollment had increased to 100 students. In spite of very limited finances, the College was beginning to grow until in the summer of 1852 a catastrophic fire destroyed it. Were it not for the insistence of Bishop John B. Fitzpatrick, who had succeeded Bishop Fenwick, and the tireless labors of Father Anthony F. Ciampi, S.J., the fourth president, the Jesuits would have abandoned the project and returned to Georgetown. Funds were raised to rebuild the College, and in 1853, it opened for the second time.

Petitions to secure a Charter for the College from the General Court of the Commonwealth of Massachusetts were denied in 1847 for a variety of causes, including anti-Catholicism on the part of some legislators. Nonetheless, the College conducted its business and awarded its diplomas. Validating their reputation for cleverness, the Jesuits at Holy Cross had each one of them signed by the President of Georgetown. Finally, with the energetic support of Governor John A. Andrew, the Charter was granted on March 24, 1865.

With an enrollment of about 3,100 men and women from across the United States and abroad, offering academic programs in some 60 fields on a campus unmatched for its beauty and sophistication, the College of the Holy Cross stands as one of the finest undergraduate, liberal arts colleges in our nation. Faithful to its Jesuit tradition and character, religion in both scholarship and practice plays an important part in the curriculum and daily life of the College. With an agreed-upon mission to educate men and women for and with others, Holy Cross students are urged to measure their personal successes in life by what they have done to better the lives of others, especially those less fortunate than themselves.

Although relatively small, Holy Cross is a quite elaborate institution. Its full-time faculty numbers 306 and its library contains approximately 654,000 holdings (books, serials and periodicals). Classrooms, libraries, residence halls, laboratories and facilities for sports and recreation are up to date and extremely well-equipped. Its operating expenditures were $175 million in fiscal 2021 and, as of June 20, 2021, the College had an endowment of $1.04 billion.