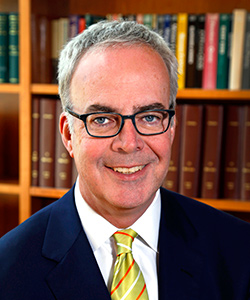 Thomas M. Landy, a sociologist with a specialization in the sociology of religion and Catholicism, is director of the Rev. Michael C. McFarland, S.J. Center for Religion, Ethics and Culture at the College of the Holy Cross. His primary research is in global Catholicism, and he founded and leads research for Catholics & Cultures, a web-based initiative to explore the religious lives and practices of lay Catholics in their particular cultural contexts around the world. He has conducted research in 30 countries and authored nearly 250 articles for the site. Since 2003, he has organized an annual Ignatian pilgrimage to Spain and Rome for faculty from Holy Cross and other Jesuit colleges and universities.

In 1992 he founded Collegium, a colloquy on faith and intellectual life. A consortium of 65 Catholic colleges and universities in the U.S. and Canada, Collegium sponsors highly regarded summer faculty development programs around the country. Since 2001, Collegium has been sponsored by the Association of Catholic Colleges and Universities, and Landy continues to serve as Collegium's executive director.

Landy is editor of "As Leaven for the World: Catholic Reflections on Faith, Vocation, and the Intellectual Life" (Franklin, WI: Sheed and Ward, 2001), and, with Karen Eifler, "Becoming Beholders: Cultivating a Sacramental Imagination in the Classroom" (Collegeville: Liturgical Press, 2014). He is recipient of the John Henry Newman Medal, which honors exemplars of Jesuit Catholic education, at Loyola College in Maryland's 2009 commencement exercises. In 2017, he received the Association of Catholic Colleges and Universities (ACCU) Presidents’ Distinguished Service Award for personal service of exceptional quality to Catholic higher education. He has lectured on more than 50 campuses and at association meetings in the United States, Canada, Hungary, India, Kenya, Poland and the Philippines. He has been interviewed for the New York Times, Boston Globe, Chronicle of Higher Education, and America.

From 2003-08, Landy was director of the Lilly Vocation Discernment Initiative at Holy Cross. This initiative sponsored two dozen programs including convocations, summer internships, parish ministry internships and lectures to encourage students to reflect on faith and commitment as they consider their career paths. He has taught in various capacities at Harvard University, Boston University, Fairfield University, Loyola University Chicago, and Saint John’s University, MN.

Landy holds a Ph.D. in sociology from Boston University, an M.Div. from Weston School of Theology, an M.A. in international relations from the University of Chicago and a B.A. in history from Fairfield University.