Seelos Theatre screens second-run films every week when school is in session. The movies are free and open to the public on a first-come, first-served basis. 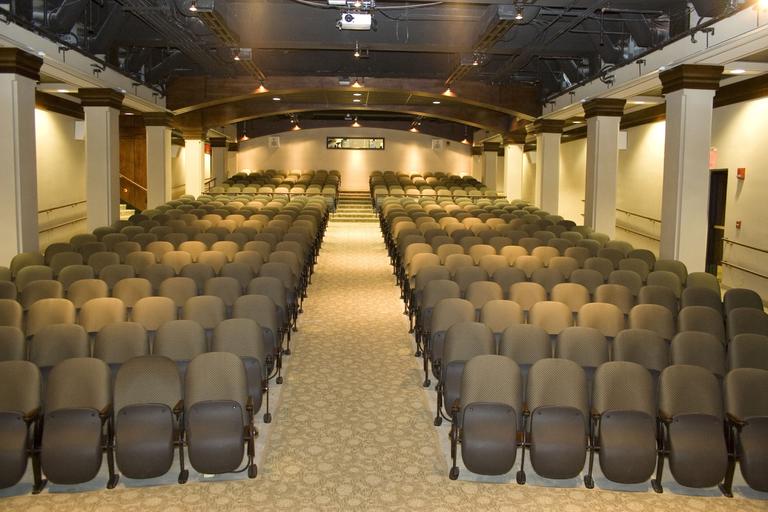 Located in Kimball Hall, the state-of-the-art Francis Xavier Seelos Theatre was renovated in 2008 and seats 360. Most of the films are shown on Blu-ray. For directions to campus and walking directions to Seelos Theatre, please visit our directions page. For more information, please call the Seelos Box Office at 508-793-2455.

Please note that all films are open only to the campus community.

Wednesday, Sept. 1: Showing at 8 p.m. Rated PG. In the years after the Civil War, Jo March (Saoirse Ronan) lives in New York City and makes her living as a writer, while her sister Amy March (Florence Pugh) studies painting in Paris. Amy has a chance encounter with Theodore "Laurie" Laurence (Timothée Chalamet), a childhood crush who proposed to Jo, but was ultimately rejected. Their oldest sibling, Meg March (Emma Watson), is married to a schoolteacher, while shy sister Beth (Eliza Scanlen) develops a devastating illness that brings the family back together.

Friday, Sept. 3 and Saturday, Sept. 4: Showing at 7 p.m. Rated PG-13. American automotive designer Carroll Shelby and British race car driver Ken Miles compete in a fierce corporate battle as well as nature itself,to build a vehicle for the Ford automobiles. Together, they plan to compete against the race cars of Enzo Ferrari at the 24 Hours of Le Mans in France in 1966.

Friday, Sept. 10 and Saturday, Sept. 11: Showing at 7 p.m. Rated R. Forever alone in a crowd, failed comedian Arthur Fleck seeks connection as he walks the streets of Gotham City. Arthur wears two masks — the one he paints for his day job as a clown, and the guise he projects in a futile attempt to feel like he's part of the world around him. Isolated, bullied and disregarded by society, Fleck begins a slow descent into madness as he transforms into the criminal mastermind known as the Joker.

Wednesday, Sept. 15: Showing at 8 p.m. Rated PG-13. Based on real events, A Hidden Life is the story of an unsung hero, Bl. Franz Jägerstätter, who refused to fight for the Nazis in World War II. When the Austrian farmer is faced with the threat of execution for treason, it is his unwavering faith and his love for his wife, Fani, and children that keeps his spirit alive.

'Star Wars: The Rise of Skywalker'

Friday, Sept. 17 and Saturday, Sept. 18: Showing at 7 p.m. Rated PG-13. While the First Order continues to ravage the galaxy, Rey finalizes her training as a Jedi. But danger suddenly rises from the ashes as the evil Emperor Palpatine mysteriously returns from the dead. While working with Finn and Poe Dameron to fulfill a new mission, Rey will not only face Kylo Ren once more, but she will also finally discover the truth about her parents as well as a deadly secret that could determine her future and the fate of the ultimate final showdown that is to come.

Wednesday, Sept. 22: Showing at 8 p.m. Rated R. Jobless, penniless, and, above all, hopeless, the unmotivated patriarch, Ki-taek, and his equally unambitious family: his supportive wife, Chung-sook; his cynical twentysomething daughter, Ki-jung, and his college-age son, Ki-woo--occupy themselves by working for peanuts in their squalid basement-level apartment. Then, by sheer luck, a lucrative business proposition will pave the way for an ingeniously insidious scheme, as Ki-woo summons up the courage to pose as an English tutor for the teenage daughter of the affluent Park family. Now, the stage seems set for an unceasing winner-take-all class war. How does one get rid of a parasite?

Friday, Sept. 24 and Saturday, Sept. 25: Showing at 7 p.m. Rated PG-13. In 1984, after saving the world in Wonder Woman (2017), the immortal Amazon warrior, Princess Diana of Themyscira, finds herself trying to stay under the radar, working as an archaeologist at the Smithsonian Museum. With the memory of the brave U.S. pilot, Captain Steve Trevor, etched on her mind, Diana Prince becomes embroiled in a sinister conspiracy of global proportions when a transparent, golden-yellow citrine gemstone catches the eye of the power-hungry entrepreneur, Maxwell Lord. Now, as a dear old friend from the past miraculously enters the picture, and Barbara Minerva, Diana's insecure gemologist colleague gives in to desire, suddenly, deceit, greed, and false promises catapult Maxwell into the limelight. More and more, cataclysmic events push the world to the brink, and emotionally vulnerable Diana must address a cruel dilemma. Can mighty Wonder Woman save humankind once again?

'Portrait of a Lady on Fire'

Wednesday, Sept. 29: Showing at 8 p.m. Rated R. In 18th century France a young painter, Marianne, is commissioned to do the wedding portrait of Héloïse without her knowing. Therefore, Marianne must observe her model by day to paint her portrait at night. Day by day, the two women become closer as they share Héloïse's last moments of freedom before the impending wedding.

Wednesday, Oct. 6: Showing at 8 p.m. Rated R. During World War I, two British soldiers — Lance Cpl. Schofield and Lance Cpl. Blake — receive seemingly impossible orders. In a race against time, they must cross over into enemy territory to deliver a message that could potentially save 1,600 of their fellow comrades — including Blake's own brother.

Friday, Oct. 1 and Saturday, Oct. 2: Showing at 7 p.m. Rated R. A young female Mexican worker, Dani Ramos, is hunted down by a virtually indestructible terminator from the future called a REV-9. However, she is protected by an enhanced human named Grace who is also from the future. They flee from the unstoppable terminator and, out of the blue, Sarah Connor helps them on the road. All three head to Laredo, Texas, where Grace has the coordinates of a possible support and where they meet a T-800 who is living in an isolated location with his family. The group teams up to try to destroy the REV-9.

Wednesday, Oct. 20: Showing at 8 p.m. Rated R. A retired sheriff and his wife, grieving over the death of their son, set out to find their only grandson.

'News of the World'

Wednesday, Oct. 27: Showing at 8 p.m. Rated PG-13. Five years after the end of the Civil War, Captain Jefferson Kyle Kidd (Tom Hanks), a veteran of three wars, now moves from town to town as a non-fiction storyteller, sharing the news of presidents and queens, glorious feuds, devastating catastrophes, and gripping adventures from the far reaches of the globe. On the plains of Texas, he crosses paths with Johanna (Helena Zengel), a 10-year-old taken in by the Kiowa people six years earlier and raised as one of their own. Johanna, hostile to a world she's never experienced, is being returned to her biological aunt and uncle against her will. Kidd agrees to deliver the child where the law says she belongs. As they travel hundreds of miles into the unforgiving wilderness, the two will face tremendous challenges of both human and natural forces as they search for a place that either can call home.

Friday, Oct. 29 and Saturday, Oct. 30: Showing at 7 p.m. Rated PG-13. A young Chinese maiden disguises herself as a male warrior in order to save her father.

Wednesday, Nov. 3: Showing at 8 p.m. Rated PG-13. A Korean American family moves to an Arkansas farm in search of its own American dream. Amidst the challenges of this new life in the strange and rugged Ozarks, they discover the undeniable resilience of family and what really makes a home.

Friday, Nov. 5 and Saturday, Nov. 6: Showing at 7 p.m. Rated PG-13. Legends collide as Godzilla and Kong, the two most powerful forces of nature, clash on the big screen in a spectacular battle for the ages. As a squadron embarks on a perilous mission into fantastic uncharted terrain, unearthing clues to the Titans' very origins and mankind's survival, a conspiracy threatens to wipe the creatures, both good and bad, from the face of the earth forever.

Wednesday, Nov. 10: Showing at 8 p.m. Rated PG-13. Following the events at home, the Abbott family now face the terrors of the outside world. Forced to venture into the unknown, they realize the creatures that hunt by sound are not the only threats lurking beyond the sand path.

Friday, Nov. 12 and Saturday, Nov. 13: Showing at 7 p.m. Rated PG-13. When renowned crime novelist Harlan Thrombey (Christopher Plummer) is found dead at his estate just after his 85th birthday, the inquisitive and debonair Detective Benoit Blanc (Daniel Craig) is mysteriously enlisted to investigate. From Harlan's dysfunctional family to his devoted staff, Blanc sifts through a web of red herrings and self-serving lies to uncover the truth behind Harlan's untimely death.

Wednesday, Nov. 17: Showing at 8 p.m. Rated PG-13. In the Heights centers on a variety of characters living in the neighborhood of Washington Heights, on the northern tip of Manhattan. At the center of the show is Usnavi, a bodega owner who looks after the aging Cuban lady next door, pines for the gorgeous girl working in the neighboring beauty salon and dreams of winning the lottery and escaping to the shores of his native Dominican Republic. Meanwhile, Nina, a childhood friend of Usnavi's, has returned to the neighborhood from her first year at college with surprising news for her parents, who have spent their life savings on building a better life for their daughter. Ultimately, Usnavi and the residents of the close-knit neighborhood get a dose of what it means to be home.

Friday, Nov. 19 and Saturday, Nov. 20: Showing at 7 p.m. Rated R. Struggling with alcoholism, Dan Torrance remains traumatized by the sinister events that occurred at the Overlook Hotel when he was a child. His hope for a peaceful existence soon becomes shattered when he meets Abra, a teen who shares his extrasensory gift of the "shine." Together, they form an unlikely alliance to battle the True Knot, a cult whose members try to feed off the shine of innocents to become immortal.

Wednesday, Dec. 1: Showing at 8 p.m. Rated R. Following the economic collapse of a company town in rural Nevada, Fern (Frances McDormand) packs her van and sets off on the road exploring a life outside of conventional society as a modern-day nomad. The third feature film from director Chloé Zhao, NOMADLAND features real nomads Linda May, Swankie and Bob Wells as Fern's mentors and comrades in her exploration through the vast landscape of the American West.

Friday, Dec. 3 and Saturday, Dec. 4: Showing at 7 p.m. Rated PG-13. Estella is a young and clever grifter who's determined to make a name for herself in the fashion world. She soon meets a pair of thieves who appreciate her appetite for mischief, and together they build a life for themselves on the streets of London. However, when Estella befriends fashion legend Baroness von Hellman, she embraces her wicked side to become the raucous and revenge-bent Cruella.

'The Personal History of David Copperfield'

Wednesday, Dec. 8: Showing at 8 p.m. Rated PG. A fresh and distinctive take on Charles Dickens' semi-autobiographical masterpiece, “The Personal History of David Copperfield,” set in the 1840s, chronicles the life of its iconic title character as he navigates a chaotic world to find his elusive place within it. From his unhappy childhood to the discovery of his gift as a storyteller and writer, David's journey is by turns hilarious and tragic, but always full of life, color and humanity.

Friday, Dec. 10 and Saturday, Dec. 11: Showing at 7 p.m. Rated PG-13. In Marvel Studios' action-packed spy thriller "Black Widow," Natasha Romanoff aka Black Widow confronts the darker parts of her ledger when a dangerous conspiracy with ties to her past arises. Pursued by a force that will stop at nothing to bring her down, Natasha must deal with her history as a spy and the broken relationships left in her wake long before she became an Avenger.

All synopses courtesy of IMDB.com.