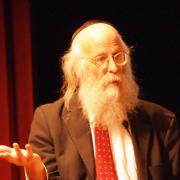 Through the Kraft-Hiatt Fund, the College of the Holy Cross has been fortunate to host Dr. Alan Rosen, scholar of Holocaust literature, for public lectures and class visits over several years. Rosen is a lecturer at Yad Vashem, and has held fellowships at the Fondation pour la Mémoire de la Shoah in Paris and the United States Holocaust Memorial Museum. Rosen earned his Ph.D. in literature and religion at Boston University where he studied under the supervision of renowned Holocaust survivor, Nobel Peace Prize winner Elie Wiesel. He has taught Holocaust literature at colleges and universities in Israel and the United States.

He is author of "The Wonder of their Voices: The 1946 Holocaust Interviews of David Boder" (Oxford University Press, 2010), "Sounds of Defiance: The Holocaust, Multilingualism, and the Problem of English" (University of Nebraska Press, 2005) and "Dislocating the End: Climax, Closure, and the Invention of Genre" (Peter Lang, Inc., 2001), and is editor of a number of collections reflecting on Elie Wiesel's work. His recent book "The Holocaust's Jewish Calendars: Keeping Time Sacred, Making Time Holy" (Indiana University Press, 2019) has been named as a recipient of The 2020 Yad Vashem International Book Prize for Holocaust Research.

November 13, 2019
Memory as Protest: How and Why We Remember the Holocaust — the importance in Jewish tradition of commemorating the people, places and times of those murdered.
Watch the video»

October 30, 2018
Holocaust Witness: Back to Basics — In this talk, Alan Rosen weaves personal stories of those who survived or died in the Holocaust with historical background on the events that led up to and shaped World War II in Europe. He then reflects on what it means to bear witness.
Watch the video»

November 1, 2017
Out of the Depths: Jewish Religious Life and Practice During and After the Holocaust
Watch the video»

November 3, 2014
To Capture the Fire: The Life and Works of Elie Wiesel
Watch the video: Stream Online» | Free iTunes download»

February 13, 2008
Broken Homes, Broken Hearts: The Holocaust and its Languages