Over the last decade, the McFarland Center has hosted a number of deeply engaging lectures, discussions, and conferences exploring themes of racial justice and activism in America. Many are available as streaming video or audio podcasts. We invite you to explore, revisit and share.

At a moment when many students feel particularly compelled to activism that improves the well-being of Black and Brown people, and are searching for ways to channel that activism into long-term structural change, the McFarland Center is offering three special summer opportunities to engage with young alumni who have become leaders in that work. These moderated discussions identify structural barriers that disproportionately affect Black and Brown communities, explore actions that can help to close the racial gap, and help students think about how they can do the same.

My Brother's Keeper: Closing the Opportunity Gap for Young Men of Color

​College of the Holy Cross alumnus Broderick Johnson '78 speaks on his roles working in the White House: as assistant to President Barack Obama, as Cabinet secretary, and as chair of the My Brother's Keeper Task Force, which works to improve outcomes for boys and young men of color in this country. A panel of students — Greyson Ford ’16, Jewel Duberry-Douglas ’18, Lance Madden ’18, Isaiah Baker ’16, and Marcellis Perkins ’19 — posed questions ranging from educational policy and STEM initiatives to police-community relations and criminal justice reform.

Finding the Essence of Christianity in Racial America

Willie Jennings, associate professor of systematic theology and Africana studies at Yale Divinity School, addresses what he describes as a Christian crisis in our country. To find the essence of Christianity, he proposes a spiritual practice that cultivates a sense of belonging and initiates us in: a renunciation of whiteness, humility as a learner, and a desire for life together that is registered geographically. His talk is one of the Deitchman Family Lectures on Religion and Modernity.
Watch the talk by Willie Jennings»

In this panel discussion, Deborah Gray White, Board of Governors Distinguished Professor of History at Rutgers University, and Robert Patterson, associate professor and chair of African American Studies at Georgetown University, focus on how their institutions of higher learning are reckoning with difficult histories in relation to enslavement and justice. Holy Cross history professor Stephanie Yuhl prefaces the discussion with a review of Holy Cross's efforts to date to address its ties to slavery. The event is co-sponsored with Peace and Conflict Studies, History and Africana Studies.
Watch the discussion on Accounting for History»

Tricia Bushnell, director of the Midwest Innocence Project, shares stories of wrongful convictions, explains the difficult appeals process, and exposes the lack of justice for innocent people caught in the criminal justice system. She also shows how race plays a role in the conviction rates and emphasizes the power that prosecutors wield in shaping the criminal justice system. The talk is co-sponsored with Peace and Conflict Studies.

Watch the lecture on Race, Poverty and Criminal Justice»

Fishbowl Discussion: The Status of Our Civil Rights 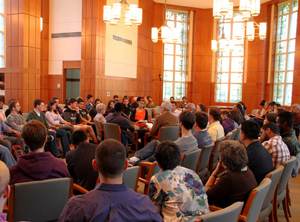 What do recent legal decisions say about the status of minorities in our country? This discussion addresses the relative importance of Supreme Court rulings on the Voting Rights Act and Affirmative Action, the federal court judgment against the "Stop and Frisk" program in New York City, and the acquittal of George Zimmerman in the shooting death of Trayvon Martin. The "fish" also weigh in on gay rights victories such as the overturning of Defense of Marriage Act provisions and the legalization of same-sex marriage in several jurisdictions. Issues surrounding immigration and undocumented aliens also arise.

From the conference "The Other America Then and Now":

Fifty years after Michael Harrington '47 published "The Other America," in March 2012, the McFarland Center convened scholars and activists to revisit his ideas and take on some of the defining issues of poverty today. The talks included:

Listen and Learn on Apple Podcasts

From the Civil War to Ferguson: The Role of the Black Church as a Training Ground for Activism

Karsonya Wise Whitehead explores the role of the black church in the context of American history, the recent events in Ferguson and New York, and the African American experience and identifies four common drivers of black rights movements. Whitehead is associate professor of communication and Africana and African American studies at Loyola University Maryland and author of "Letters to My Black Sons: Raising Boys in a Post-Racial America."
Watch the "Black Rage" video shown at the beginning of this lecture»
Listen to Karsonya Whitehead's lecture on Apple Podcasts»

Rev. Bryan Massingale, professor of theological ethics at Marquette University and author of “Racial Justice and the Catholic Church,” talks about the recent shootings of unarmed black men, analyzes the culture that conditions us to believe these shootings are normal and reasonable, and reflects on Catholic Social Thought and its teachings on solidarity. His lecture is one of the Deitchman Family Lectures on Religion and Modernity.
Listen to Rev. Massingale on Apple Podcasts»

Mark Warren, associate professor of education at the Harvard Graduate School of Education, delivers the keynote address for the conference on the practice and pedagogy of organizing in the 21st century. A sociologist concerned with the revitalization of American democratic and community life, he studies efforts to strengthen institutions that anchor inner city communities - churches, schools, and other community-based organizations - and to build broad-based alliances among these institutions and across race and social class.
Listen to Mark Warren's keynote address on Apple Podcasts»