Catholics & Cultures, an ambitious scholarly initiative for understanding the religious lives and practices of Catholics worldwide, is a major new program of the Rev. Michael C. McFarland, S.J. Center for Religion, Ethics and Culture.

Catholics & Cultures explores how Catholic practices, beliefs, trends, and ethical concerns are manifest in very different cultural settings. As part of its program offerings, the initiative will offer web-based resources, scholarly conversations, international conferences, and publications, including a scholarly e-journal. It will also sponsor postgraduate or visiting fellows who will develop their scholarship at Holy Cross, offer a wide array of new courses to students, and create summer immersion and research opportunities for students in church settings worldwide.

No other program with this scope currently exists, giving Holy Cross the opportunity to take the lead in the scholarly study of Catholic life and practice around the world.

The centerpiece of the Catholics & Cultures initiative is a website with universal access to scholarship, data, video and images depicting contemporary forms of lived Catholicism around the world. This dynamic resource currently features content from more than 30 countries, from Argentina to Ukraine. Explore by country, theme or one of the 23 recognized Eastern churches.

The Journal of Global Catholicism is an open-access, peer-reviewed scholarly journal founded by Editor-in-Chief Mathew N. Schmalz, professor of religious studies at Holy Cross. It is dedicated to fostering the understanding of diverse forms of lived Catholicism with attention to their significance for theoretical approaches within and across multiple academic disciplines. The Journal invites submissions. Read the latest issue»

Fraternity, Martyrdom and Peace in Burundi: The Forty Servants of God of Buta
Thursday, March 24, 2022
Jodi Mikalachki, associate professor of English at the University of Burundi and a visiting fellow at DePaul University’s Center for World Catholicism and Intercultural Theology, examines how Burundian Catholics understand the significance of the Buta martyrdom to their country and the world.

Untidy, Eclectic, and Diverse: Lived Religion in Latin America Today
Wednesday, February 9, 2022
Gustavo Morello, S.J., associate professor of sociology at Boston College, reports on an extensive three-year study of religion as practiced by Latin Americans in their daily lives. One of the Deitchman Family Lectures on Religion and Modernity.

You Think You Know Catholicism? Peering into the Diversity of the Global Church
September 20, 2021
In this lunchtime talk for Holy Cross students, Thomas M. Landy, director of the McFarland Center for Religion, Ethics and Culture, introduces the incredible diversity of worship styles and devotions—including Masses, feasts, processions, and pilgrimages—practiced by contemporary Catholics in countries and cultures around the world. Part of International Education Week.

African, Christian, Feminist and More
September 16, 2021
Teresia Mbari Hinga, associate professor of religious studies at Santa Clara University, is a founding member of the Circle of Concerned African Women Theologians, a pan-African association of women who study the role and impact of religion and culture on African women's lives. One of the Deitchman Family Lectures on Religion and Modernity.

Deaf Catholics Shaping the Church Today
February 24, 2021
Lana Portolano, author of "Be Opened: The Catholic Church and Deaf Culture" (CUA Press, 2020) and professor of English at Towson University, joins College of the Holy Cross Deaf Studies Professor Stephanie Clark, an expert on Deaf culture, and Rev. Joseph Bruce, S.J., archivist with the Deaf Catholic Archives at Holy Cross and the first Deaf Jesuit priest, for a discussion at the intersection of Catholic life and Deaf culture.

Mary in Micronesia: Breadwinner, Protector, and Strong Model for Women
November 11, 2019, College of the Holy Cross
Juliana Flinn, professor of anthropology at the University of Arkansas Little Rock and author of "Mary, the Devil and Taro: Catholicism and Women's Work in a Micronesian Society" (University of Hawaii Press, 2010), describes how gender roles among Pollapese Catholics in Micronesia are inspired by a strong image of Mary.

International Conference: Mediating Catholicism: A Symposium on Global Catholic Media Practices
September 12-15, 2019; Monastère des Augustines, Québec City, Québec, Canada
This three-day symposium will gather an international group of both emerging and established scholars for an intensive and first-of-its-kind forum of interdisciplinary exchange on the theme of global Catholicism and media technologies. Co-sponsored with McGill University and the University of North Carolina Charlotte.

Church of Migrants and Migrant Church: Theology of the Church in the Age of Migration
March 28, 2019, College of the Holy Cross
Peter Phan is the inaugural holder of the Ignacio Ellacuria Chair of Catholic Social Thought at Georgetown University. He is editor, with Elaine Padilla, of “Christianities in Migration: The Global Perspective” (Palgrave Macmillan, 2016).

Is China the New Roman Empire? Christian Growth in China and Global Implications
October 15, 2018, College of the Holy Cross
Fenggang Yang, professor of sociology and director of the Center on Religion and Chinese Society at Purdue University, talks about the social and cultural factors for the Christian growth, why Protestantism grows faster than Catholicism, and the changing church-state relationship. One of the Deitchman Family Lectures on Religion and Modernity.

International Conference: Lived Catholicism from the Balkans to the Baltics
March 9-10, 2018, Pázmány Péter Catholic University, Budapest, Hungary
Europe’s history is permeated with the rich array of rituals and world views of Catholicism. On a local level, this history continues to inform the ways individual Catholics experience and understand the diverse practices and values that define Catholicism in various communities. This conference offers scholars and observers an opportunity to attend to and study the diversity of Catholic practices in this region of Europe, from the Balkans to the Baltics, as well as the meaning of Catholicism in its various relationships with cultures. Learn more»

Our Lady of the Slaves: Marian Devotion in Cuba, Race and Revolution
October 2, 2017
Jalane Schmidt, associate professor of religious studies at the University of Virginia and author of “Cachita’s Streets: The Virgin of Charity, Race, and Revolution in Cuba” (Duke University Press, 2015) explores how devotion to the Virgin of Charity has been central to how many Cubans of various racial and religious identities have navigated the Revolutionary to contemporary eras.

The Politics of Mercy: Ambassadors of Reconciliation in Post-Genocide Rwanda
April 14, 2016
Jay Carney, assistant professor of theology and director of African Studies at Creighton University, draws upon the situation in Rwanda to explore how the Pope's call for a "year of mercy" happens within very difficult political contexts.

What Really Matters about the Globalization of the Catholic Charismatic Renewal?
February 8, 2016
Marc Loustau will present his ethnographic fieldwork with Charismatic Renewal participants at the Csíksomlyó Roman Catholic shrine in the Transylvania region of Romania, to highlight the existential context of Charismatic rituals and storytelling.

INTERNATIONAL CONFERENCE
FROM CRADLE TO THE GRAVE: CATHOLICISM AND STAGES OF LIFE IN THE PHILIPPINES 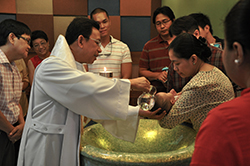 A rich variety of religious and cultural practices mark different steps in the journeys of Filipino Catholics here on earth. Such practices prepare us for important transitions in our lives and give us ways to express our hopes, gratitude, fears and faith. Some practices are particular to a single town, island or province. Others are common across the archipelago, or are sacramental practices common to all Catholics across the globe. Inevitably, even the latter are expressed in a distinctively Filipino style, and interpreted through a Filipino lens.

This conference is an opportunity to describe these diverse practices, to explore what they mean to the people who celebrate them, and to examine how they relate to the particular social and cultural contexts that give them meaning.

Miraculous Images and Votive Offerings in Mexico
October 5, 2015
Frank Graziano, John D. MacArthur Professor of Hispanic Studies at Connecticut College, describes the types of miracles devotees seek and illustrates their wide range of petitionary and votive offerings, from collages to clothing, documents, letters, harvests and more. This talk was one of the Deitchman Family Lectures on Religion and Modernity.

The Camino Experience: Making the Way
February 4, 2015
The 2014 Artist-in-Residence Cristina Pato returns to present a work-in-progress inspired by the Camino de Santiago pilgrimage and her Galician roots. Making the Way brings together the College Choir (dir. David Harris), Theatre Department faculty and students, and the Cantor Art Gallery in a spiritual journey guided by the stories of local pilgrims who have walked the Camino. Presented by Arts Transcending Borders and co-sponsored with Catholics & Cultures, an initiative of the McFarland Center, and the Cantor Art Gallery. 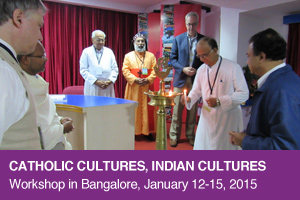 A workshop on rites, religiosity, and cultural diversity in Indian Catholicism
January 12-15, 2015; Bangalore, India
India is a multicultural society and home to three rites (Roman, Syro-Malabar, Syro-Malankara) within the Catholic Church.  This unique combination has created a particularly rich and diverse context for Catholic religious life. This workshop examines how Catholic life is practiced in India’s different cultural and Catholic contexts. The intent of the workshop is to move away from the often contentious jurisdictional issues surrounding the rites and instead focus on the perspectives gained from considering the lived experience of ordinary Catholics. Sponsored by Dharmaram Vidhya Ksetram and the College of the Holy Cross. 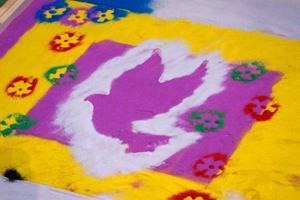 Interpreting a Catholic tradition popular in Latin America, art students at Holy Cross created a carpet of colored sand leading to the steps of the St. Joseph Memorial Chapel for Palm Sunday. Their intricate designs feature "creatures with wings" — angels, insects, a phoenix, dove and other birds, along with crosses and abstract patterns. Learn more.

Our Lady of the Good Death: Afro-Catholicism in Brazilian Cultural Heritage
October 23, 2013
Stephen Selka, associate professor in American studies and in religious studies at Indiana University, talks about the Sisterhood of Our Lady of the Good Death (Boa Morte) in Bahia, Brazil, and their week-long Feast of the Assumption. The festival is a blend of Catholicism and Candomblé, an Afro-Brazilian religion, that has become part of the heritage tourism of the African diaspora.

Journeys of Transformation: Isthmus Zapotec beliefs and rituals surrounding death, healing and pilgrimage
April 4, 2013
Anya Peterson Royce, Chancellor's professor of anthropology and comparative literature at Indiana University, is author of "Becoming an Ancestor: The Isthmus Zapotec Way of Death" (SUNY Press, 2011), which looks at the intricate blending of Catholicism and indigenous spiritual tradition in the death rituals of Zapotecs in southern Mexico.

Living in China's Highly Politicized Church Today
October 3, 2012
Rev. Paul Mariani, S.J., assistant professor of history at Santa Clara University, talks about religious policy and conflict in the People's Republic of China since 1950 and how Catholics in China understand their faith today. He is author of "Church Militant: Bishop Kung and Catholic Resistance in Communist Shanghai" (Harvard University Press, 2011).

The Contours of Catholic Life and Practice Today: Challenges and opportunities in the study of global Catholicism
December 9, 2011

Real Presences and the Study of Lived Religion
Robert Orsi, Professor of Religion and the Grace Craddock Nagle Chair in Catholic Studies, Northwestern University
Respondent: Justin Poché, Alexander F. Carson Faculty Fellow in the History of the United States and Assistant Professor of History, College of the Holy Cross
Note: At the speaker's request, this session was not recorded.