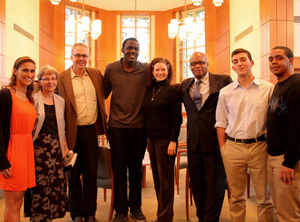 About the Fish: A fishbowl-style discussion features a small ring of featured speakers who engage in a moderated discussion which is then opened up to the surrounding audience, seated in outer circles. Featured participants, or fish, for this event were (from left to right): Patricia Giglio '14; Margaret Freije, associate dean and associate professor of mathematics; moderator Thomas M. Landy, director of the McFarland Center for Religion, Ethics and Culture; Antonio Willis-Berry '13; Kendy Hess, Brake-Smith assistant professor in social philosophy and ethics; Darrell Byers '83, director of development at Boston's NPR affiliate WBUR; Christopher Theobalt '13;and Ariel Jimenez '13.

About the Event: In October 2012, the Supreme Court will hear arguments on Fisher v. University of Texas at Austin, a case which threatens to end race-based affirmative action practices in admissions programs at public colleges and universities. Holy Cross has identified racial diversity as an institutional priority, and a ruling against affirmative action could affect admissions policies here. In this moderated discussion, students, an alumnus, a professor and a dean weigh the merits and trade-offs of affirmative action at Holy Cross.

Watch the lecture below or download it free from iTunes U.
The event followed a lecture by Harvard Law Professor Randall Kennedy on September 17 on "The Supreme Court and Affirmative Action." That video is also available online here.