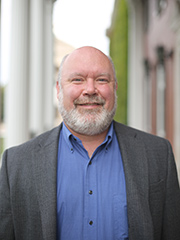 Loren earned a bachelor’s degree from Augustana College in Sioux Falls, South Dakota, a master’s degree in Political Science from Boston College, and a Ph.D. in Political Science from Brandeis University. He joined the Political Science Department as an Assistant Professor in 1999.  He was promoted to Associate Professor in 2006 and Professor in 2014.  He was honored with the Mary Louise Marfuggi Academic Advising Award in 2013 and the Holy Cross Distinguished Teaching Award in 2016.  His research analyzes global environmental politics with a focus on international efforts to address climate change and transnational air pollution.  He is the author of The Failures of American and European Climate Policy (SUNY Press, 2006), and he has published his research in Global Environmental Politics, The Cambridge Review of International Affairs, and in several edited volumes.  He regularly teaches Introduction to International Relations, International Political Economy, Global Environmental Politics, and Comparative Environmental Policy.

He served as the director of the Environmental Studies Program from 2008 to 2011 and as the director of the Center for Interdisciplinary Studies from 2013 to 2017.  He has served on numerous committees including the Committee on Tenure and Promotion, the Academic Affairs Council, the Curriculum Committee, the Ad Hoc Committee on Governance Reform, the Committee on Interdisciplinary Studies, the Presidential Taskforce on the Environment, the Graduate Studies Committee, and the Faculty Affairs Committee.  He is a member of the American Political Science Association (APSA) and the International Studies Association (ISA).  He is a former conference program chair and president of the ISA Active Learning in International Affairs Section and is active in the ISA Environmental Studies Section and the APSA Science, Technology, and Environmental Policy Section.

Office of the Provost and Dean of the College