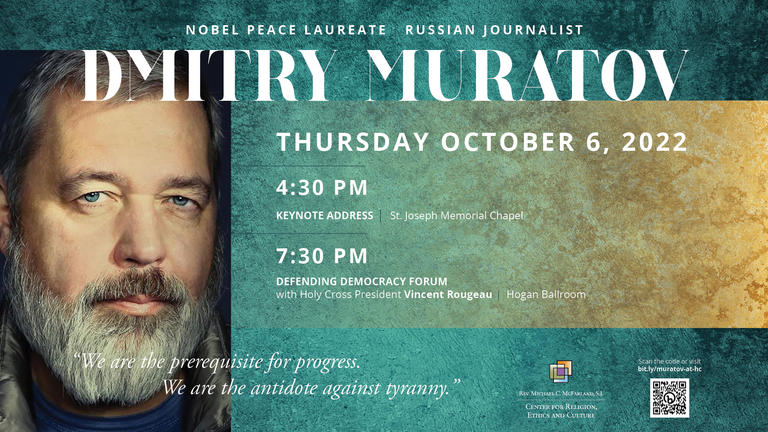 Russian journalist Dmitry Muratov, a founder and editor in chief of the newspaper Novaya Gazeta and winner of the 2021 Nobel Peace Prize (along with Filipino journalist Maria Ressa), will be on campus to talk about journalists' efforts to safeguard freedom of expression in Russia in the face of fierce opposition from Vladimir Putin.

Both events are free and open to the public. In lieu of tickets, please consider a donation to UNICEF to help protect children in Ukraine. Refer to our COVID policy for the latest guidance for visitors.

These events will not be recorded.

Dmitry Muratov is a Russian journalist who, as editor in chief of the newspaper Novaya
Gazeta, has been a vocal advocate for an independent press and known for investigating abuses of power. In 2021, he was awarded the Nobel Prize for Peace, cited for his "efforts to safeguard freedom of expression."

Muratov co-founded the pro-democracy newspaper Novaya Gazeta in 1993 with several other journalists. He was the newspaper's editor-in-chief from 1995 to 2017, and again assumed the position in 2019. As a consequence of its reporting on governmental corruption and human rights violations, six of Novaya Gazeta’s journalists were murdered, including Anna Politkovskaya, who was killed in 2006 while covering human rights abuses in Chechnya. Muratov himself was the target of an attack this spring. He was forced to suspend publication of Russia's last independent newspaper in March after warnings from the state communications watchdog, Roskomnadzor. In September, Russia's Supreme Court stripped Novaya Gazeta of its online media license.

Muratov has been the recipient of various honors, including the International Press Freedom Award (2007) from the Committee to Protect Journalists. In its announcement of the 2021 Peace Prize, the Norwegian Nobel Committee recognized the difficult conditions facing journalists worldwide and that “freedom of expression...is a precondition for democracy and lasting peace.”

In June, Muratov auctioned his Nobel medal for $103.5 million to help Ukrainian children displaced by the war. Join Muratov and Holy Cross for Peace with a donation to help UNICEF protect children in Ukraine.