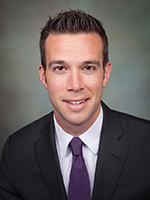 Jon Favreau '03, former director of speechwriting for President Barack Obama and co-founder of Fenway Strategies, will receive an honorary degree from the College of the Holy Cross and address this year's graduates during the College's Commencement ceremonies on Friday, May 23 at 10:30 a.m. on the campus.

Favreau will return to the Holy Cross Commencement stage, where he delivered the Valedictory Address for his class in 2003. The North Reading, Mass., native was director of speechwriting for President Obama from the beginning of his term as a United States Senator through early 2013. Prior to that, Favreau served as deputy director of speechwriting for John Kerry during his 2004 presidential campaign.

A political science major at Holy Cross, Favreau was a member of the College Honors Program and a Dana Scholar; he participated as a junior in the College's Washington Semester Program, working in the office of then U.S. Senator Kerry. His thesis, titled "The Politics of Abandonment: White Working Class Defection from the Democratic Party," which was based in part on his work in Washington, was awarded the Maurizio Vannicelli Prize. While at Holy Cross, Favreau was director of the Welfare Solidarity Project of Worcester and a participant in the student-staffed Oncology Volunteer Effort at UMASS Memorial Hospital (M.O.V.E.) He also served as editor of the opinion section of "The Crusader" student newspaper.

After leaving the White House, he co-founded Fenway Strategies, a communications and speechwriting firm. In the spring of 2013, Favreau served as a fellow at the University of Chicago Institute of Politics, teaching a weekly seminar, titled "Storytelling in the Age of Sound Bites."

Featured in TIME magazine as one of the "100 Most Influential People in the World" and in GQ's "50 Most Powerful People in D.C.," he is also a columnist for The Daily Beast.

In addition to Favreau, the College will award honorary degrees to the following individuals at Commencement:

Critically acclaimed soprano Rochelle M. Bard has won top prizes from prestigious national and international vocal competitions. She has appeared on the stages of Boston Lyric Opera, Opera Tampa, Sacramento Opera, Baltimore Opera, Utah Festival Opera, and Tanglewood, performing in "Lucia di Lammermoor," "Madama Butterfly," and "The Merry Widow," and in such roles as Violetta in "La Traviata," the four heroines in "The Tales of Hoffmann," and Gilda in "Rigoletto." She is a sought-after concert artist as well, with recent performances including: Beethoven's 9th Symphony; Mozart's Requiem; Handel's Messiah; and Brahms' Requiem. The 2014 season includes the title role in "Norma" with the Knoxville Opera, "Tosca" with the Cambridge Symphony, and her mainstage Carnegie Hall debut as the soprano soloist in Beethoven's Mass in C and Mozart's Vespers.

A Massachusetts native, she majored in biology at Holy Cross and received her master's degree in vocal performance from the New England Conservatory of Music. Her most recent return to Holy Cross was in February of 2014 when she performed at the Brooks Concert Hall. While a student at Holy Cross, she was a piano accompanist in the music department, a cantor and student leader of the music ministry, and a member of the college and chamber choirs, the Delilahs, and Pax Christi. Bard has traveled to Haiti twice and is dedicated to performing fundraiser concerts for the island nation. She resides in West Hartford, Conn., where she also teaches voice at the Hartt School of Music and serves as the director of music at the Church of St. Timothy.

An internationally recognized scholar and author, Rev. John W. Padberg, S.J., has been director and editor of the St. Louis-based Institute of Jesuit Sources since 1986. In that role, he has made the rich resources of Ignatian and Jesuit scholarship available to a wide audience. Fr. Padberg entered the Society of Jesus in 1944. He received a master's degree in history from Saint Louis University and a doctorate of philosophy from Harvard University, where he specialized in intellectual history and the history of ideas. He taught and served as academic vice president at Saint Louis University. Fr. Padberg was a member of the staff of the U.S. Jesuit Conference in Washington, D.C., and then president of the Weston Jesuit School of Theology in Cambridge from 1975 to 1985, before returning to St. Louis. While at Weston he was the founding president of the international Conference of Catholic Theological Institutions. His written works include "Colleges in Controversy: The Jesuit Schools in France from Revival to Suppression, 1815-1880" (Harvard University Press) and, with several colleagues, "For Matters of Greater Moment: The First Thirty General Congregations" (The Institute of Jesuit Sources); as well as 75 publications on various topics in the history of the Society of Jesus and on Jesuit higher education. For 16 years, Fr. Padberg served as chairman of the Seminar on Jesuit Spirituality and editor of Studies in the Spirituality of Jesuits. His current research and writing center around the history of the Society of Jesus.