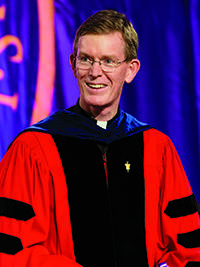 Over his nine years as president, Fr. Boroughs presided over numerous ambitious initiatives that promise to enhance opportunities to develop our students minds, bodies and spirits for generations to come.

Under his leadership, the Become More fundraising campaign raised $420 million, $20 million more than the goal. The campaign fundraising efforts resulted in the launches of the J.D. Power Center for Liberal Arts in the World and the Ciocca Center for Business, Ethics and Society. Building projects include the construction and opening of the Thomas P. Joyce Contemplative Center, the renovation and expansion of the Hart Center at the Luth Athletic Complex, the Joanne Chouinard-Luth Recreation and Wellness Center, and the groundbreaking for the Prior Performing Arts Center.

Immediately before coming to Holy Cross, Fr. Boroughs served as Georgetown’s first vice president for mission and ministry from 2003 to 2011. In addition to overseeing a division of the university which included the Office of Campus Ministry and the Office of Mission and Pastoral Care at Georgetown University Hospital, Fr. Boroughs was responsible for numerous programs for faculty, staff, students, and alumni which advanced Catholic and Jesuit identity. During his eight-year tenure at Georgetown, he raised funds to develop and endow the Calcagnini Contemplative Center, to renovate the historic Dahlgren Chapel, and to endow positions and programs for the Office of Mission and Ministry.

Prior to his role at Georgetown, Fr. Boroughs served as the rector of the Jesuit Community at Seattle University where he was also a faculty member in the School of Theology and Ministry. Previously, he taught religious studies at Gonzaga University (1989-91), served as the assistant novice director for the Oregon Province of Jesuits (1980-82), and was a parish priest at St. Leo Church in Tacoma, Washington (1978-80). A former member of the Board of Trustees at the University of San Francisco, he also served as a member of the Holy Cross Board of Trustees (2008-2011).