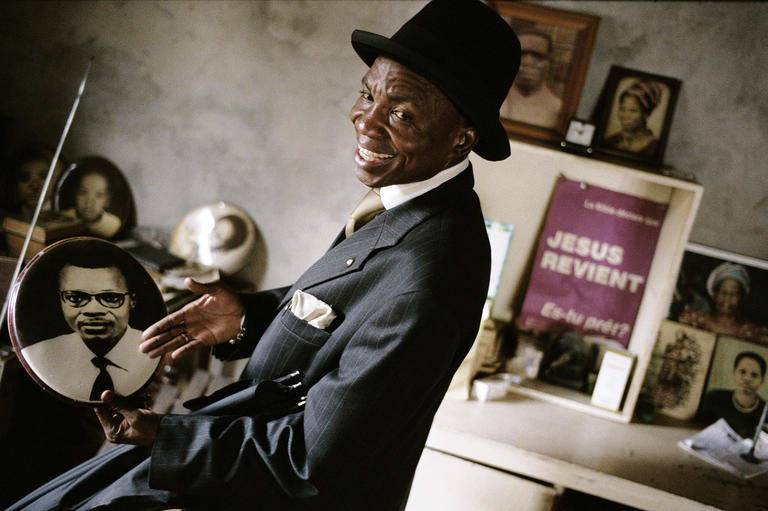 Severin with his father's portrait, 2004

Images examine cultural identities in relation to Holy Cross history conference exploring the performance and display of black masculinities in Africa, the Americas, and Europe

The Iris and B. Gerald Cantor Art Gallery at the College of the Holy Cross will feature two concurrent exhibitions of work by Spanish photographer Héctor Mediavilla and Nuyorican photographer Christopher López from Oct. 18 through Dec. 15. An opening reception will take place on Wed., Oct. 18 from 5 – 7 p.m. Both artists will be in attendance and offer brief opening remarks about their work beginning at 5:30 p.m.

Roger Hankins, director of the Cantor Art Gallery, curated the exhibitions to accompany a three-day academic conference and workshop entitled “Rethinking the Afropolitan: The Ethics of Black Atlantic Masculinities on Display”, but the works by Mediavilla and Lopez will remain on view until the end of the semester in December. The conference is being organized by Holy Cross History Department faculty members Rosa Carrasquillo and Lorelle Semley, and is sponsored by the Rev. Michael C. McFarland, S.J. Center for Religion, Ethics and Culture. View the complete schedule holycross.edu/afropolitan.

The concept of the “Afropolitan” has both positive and negative connotations, with people who embody the term being celebrated by some as models of African modernities, while others seeing them as glorified consumers or objects of globalization and capitalization. Conference panels will focus on Slavery and its Afterlives, Consuming Cultures, Texts and Improvisations, and Performing Masculinities.

Hankins became interested in Héctor Mediavilla’s work after reviewing a selection of images from his series “S.A.P.E.: Societe des Ambianceurs et des Personnes Elegantes/ Society of Tastemakers and Elegant People”. He was immediately struck by the images, which capture the personalized art form of Congolese men known as ‘Sapeurs’, who have since the early part of the 20th century used dress and performance to engage and counter the realities of political and economic hardship in postcolonial Africa.

Mediavilla resides in Barcelona and considers himself a visual storyteller who is interested in the construction of unique human identities. His photographs have appeared in publications such as the New York Times, Business Week, Time, Photo, Esquire, and many others. His work has received numerous awards and has been exhibited internationally including the Guggenheim Bilbao Museum.

Hankins also worked with photographer Christopher López over the course of many months while López was developing a new series of images evoking the history and politics embedded in the music of the Puerto Rican folk hero Ismael Rivera. In “A Visual Guide to the Heart: The Music of Ismael Rivera,” López debuts his photographs, taken recently in Puerto Rico, that were inspired by the beloved Puerto Rican singer and Afro-Caribbean icon.

López began his career as a photojournalist for the New York based paper ‘El Diario La Prensa’, his photographs have also appeared in Urban Latino Magazine, The New York Times, and the biographical work of artist Antonio Martorell, “La Adventura de la Creacion”. His work has been exhibited most notably in the major Caribbean art retrospective, “Caribbean Crosswords of the World”. His works are in the permanent collections of El Museo Del Barrio, and The World Trade Center Memorial Museum.

Hankins sees the work of both photographers as rich visual studies relating to the conference’s theme, which he hopes will enhance the discussion of the “Afropolitan” image on the world stage today during the conference, and beyond. “We’re excited to have the opportunity to showcase the work of Mediavilla and López, who are nationally and internationally recognized for their work, and to contribute to the scholarly explorations of the conference,” said Hankins.

A musical offering of new arrangements of Ismael Rivera’s hits sponsored by the Arts Transcending Borders program will complement the conference and exhibition on Fri, Oct. 20 at 8 p.m. “A Tribute to Ismael Rivera: An Afro-Caribbean Icon” will be performed by composer, arranger and multi-instrumentalist Gonzalo Grau, with a stellar ensemble, including Worcester musician Manolo Mairena. The concert is free and open to the public, but reservations are required. Reserve online at http://bit.ly/ismaelrivera.

The gallery will be closed during Thanksgiving Break, Wed., Nov 22 – 26.

Rethinking the Afropolitan: The Ethics of Black Atlantic Masculinities on Display

A Tribute to Ismael Rivera: An Afro-Caribbean Icon