Rev. John E. Brooks, S.J., president of the College, speaks at the opening of the Iris & B. Gerald Cantor Art Gallery

Rev. John E. Brooks, S.J., then president of the College, speaks at the opening ceremony of the Iris & B. Gerald Cantor Art Gallery in 1983. 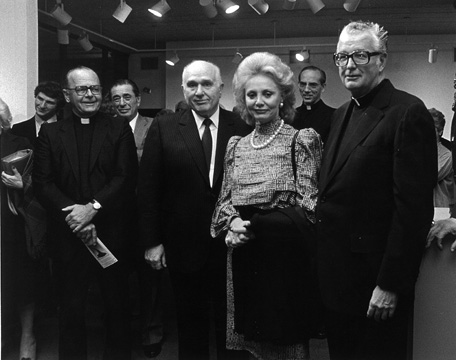 The Iris and B. Gerald Cantor Art Gallery was established in 1983 to present exhibits of art that enhance the cultural, academic and spiritual life of Holy Cross students, faculty and staff.  Upon its opening, Rev. John E. Brooks, S.J., president emeritus of Holy Cross, said that “an undergraduate liberal arts college is academically strengthened when its students and staff are exposed to works of art ... the presence of the gallery on campus affords the entire Holy Cross community an opportunity to experience that artistic beauty which so readily helps us attain the openness and tolerance necessary if we are to understand who we are and how we relate to one another.”

The Iris and B. Gerald Cantor Foundation

The Iris and B. Gerald Cantor Foundation was established in 1976 to promote and encourage the recognition and appreciation of excellence in the arts; to enhance cultural life internationally through support of art exhibitions, scholarship, and the endowment of galleries at major museums around the world; and to support biomedical research.  Iris and B. Gerald Cantor's dedication to arts patronage is represented in galleries, sculpture gardens, endowed curatorial positions, and scholarship programs at such institutions as the Metropolitan Museum of Art, New York; the Los Angeles County Museum of Art; Stanford University Museum of Art; the Brooklyn Museum, New York as well as the gallery at the College of the Holy Cross.