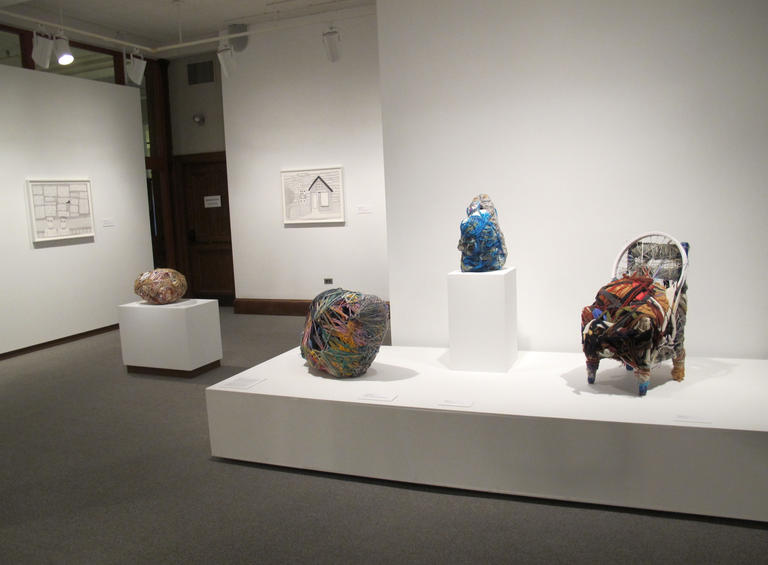 Installation view of Create, 2012, with sculptures by Judith Scott

The inaugural exhibition of the Cantor Art Gallery, Auguste Rodin, 1840 – 1917, opened in October 1983 and consisted of 31 of the artist’s bronze sculptures. Five of the exhibited sculptures were presented to Holy Cross as gifts from the Cantor Foundation, and are now part of the permanent collection.

In addition, the Cantor Art Gallery works in conjunction with the College’s visual arts department each year to mount an exhibition of the senior seminar thesis portfolios of students graduating as art majors.  Faculty exhibitions are also presented every three years.

On occasion, the gallery’s program also includes exhibitions mounted during the summer months. In 2003, the gallery presented, Rodin’s Obsession: The Gates of Hell, Selections from the Iris and B. Gerald Cantor Collection. Other summer exhibitions have presented works by alumni artists, including 25/50 Reunion Times 2: Works by James Stroud ’85 and James Paradise ’55 (2005); and Visual Studies: Artists from the Class of ’56: Tom Heinsohn, Hugh Kelly, and Dick O’Brien (2006); Treasures of the Cantor (2007); Our Fragile Home, a collaboration between artist Pat Musick and her husband Jerry Carr, a former NASA astronaut  (2014); and Collaboration: James Storud and Center Street Studio (2015).