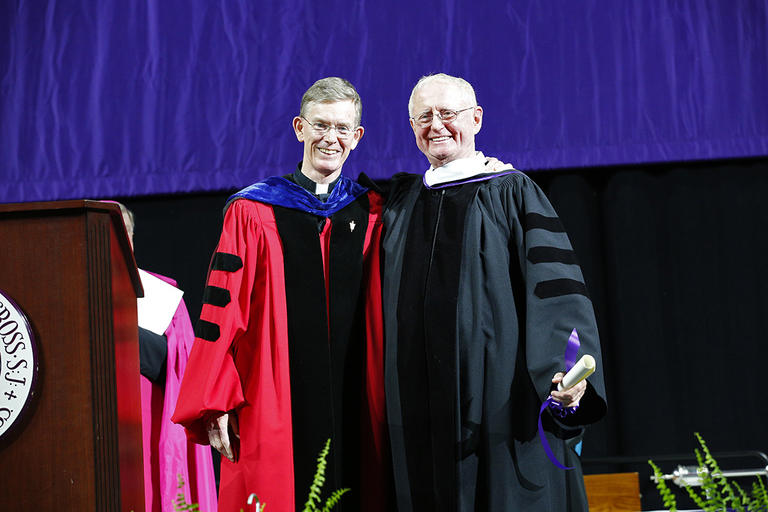 Father Robert Kennedy, your life’s journey has taken you across the world’s oceans, continents and cultures since you embraced the mission of the Society of Jesus more than six decades ago. In tandem, you have taken an intellectual, spiritual and personal voyage inward to discover the core truths that make us human, connect us to one another and spur our compassion for others through your lifelong study of Zen Buddhism. You have explored that inner dialogue with dedication and vigor as this nation’s only Jesuit known as both “Father” and “Roshi,” or Zen master. You have encouraged others to embark on their own life-changing journeys to self-discovery and enlightenment. Your passion to live with clarity, be present for others and understand diverse paths to deep spirituality found its roots in Japan, where you served as a young Jesuit.

Your full embrace of Jesuit and Buddhist spiritualities led you to a life of service to others, and a profound love and respect for all human beings that extends beyond simple tolerance. You modeled such values in your interactions with your theology students and colleagues at St. Peter’s University, where you are now a professor emeritus. They are manifested in your private practice as a psychoanalyst, where you encourage true dialogue to lead your patients to freedom and relief from emotional pain. They serve you as a representative of the United Nations Institute for Spiritual Consciousness in Politics, where you actively engage with people of all cultures, value systems and faith traditions.

You entered the Society of Jesus in 1951 as a recent high school graduate from your native New York City. You studied and taught in Japan for nearly a decade before your ordination in Tokyo in 1965. Through your fellow Jesuits, who were engaged in interfaith work with Zen Buddhists, you came to admire Zen practices. Soon you began to integrate the spiritual vitality, mindfulness and stillness of Buddhism into your life of service to others. After completing doctoral studies in theology and psychology in Canada and the United States, you returned to Japan to study with a Zen roshi, or master teacher. You immersed yourself further in your training with roshis in the U.S. In 1997, you were named a Zen roshi in your own right.

Today, you teach Zen Buddhism’s zazen, or seated meditation, in your Morning Star Zendo. You have created a place for meditation that also encourages interfaith dialogue, where people of all belief systems can come together with respect for each other's religious traditions and points of view. You tell your students that Zen must be understood as a verb, as the act of doing, as a method for putting contemplation into action. You have lived your mission of conversation and collaboration in Mexico and Ireland, where you conduct retreats, and in Ecuador, England, Wales and several U.S. cities. Your well-received books, Zen Spirit, Christian Spirit: The Place of Zen in Christian Life and Zen Gifts to Christians, explore the intersection of Christianity and Zen Buddhism.

That all may know of our great esteem for you and our strong support for your dedication to fostering inter-religious dialogue and understanding as an enlightened Catholic, a pioneering Jesuit and a selfless Zen roshi, the College of the Holy Cross confers upon you this day the degree, Doctor of Humane Letters, honoris causa.