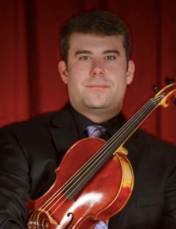 Evan Perry, a native of Somerset, MA, began the viola at the age of eight in the fourth grade.  He received a Graduate Diploma at the New England Conservatory under the tutelage of Cathy Basrak and Mai Motobuchi.  Evan received his Bachelor and Masters degrees from Boston University where he studied with Edward Gazouleas and Steven Ansell.  Music festivals that he has attended include the Tanglewood Music Center, Spoleto USA, Aspen, Bowdoin and the National Orchestral Institute.  In addition, Evan has studied chamber music with members of the Cleveland, Muir, Juilliard and Concord string quartets and has performed in masterclasses for Roberto Diaz and Atar Arad, among others.  Evan has performed frequently with the Boston Philharmonic Orchestra and has been a substitute musician with the New World Symphony as well as performed with many ensembles throughout the Boston area.  Evan is also passionate about pedagogy which has led to his being on faculty at The College of the Holy Cross in Worcester, Ma and being Assistant Director of El Sistema Somerville in Somerville, MA.