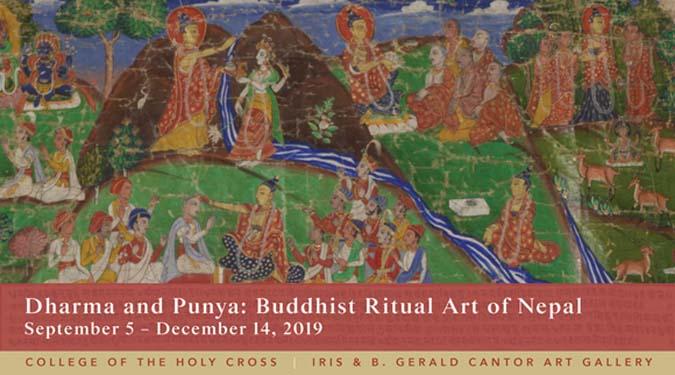 "Dharma and Punya: Buddhist Ritual Art of Nepal" has been made possible in part by the National Endowment for the Humanities: Exploring the human endeavor.

Any views, findings, conclusions, or recommendations expressed in this exhibition do not necessarily represent those of the National Endowment for the Humanities.

The Iris & B. Gerald Cantor Art Gallery at the College of the Holy Cross will exhibit nearly one hundred objects of Buddhist ritual art, many rarely seen in the West, in the upcoming exhibition “Dharma and Punya: Buddhist Ritual Art of Nepal” from September 5 through December 14. A series of events scheduled throughout the semester, including lectures, ritual demonstrations, and a conference exploring major themes of the exhibition will be kicked off by an opening lecture given by the co-curators and reception on September 12 beginning at 4:30 p.m.

Scholars Dr. Todd T. Lewis, distinguished professor of arts and humanities in the Religious Studies Department at the College, and Dr. Jinah Kim, professor of history of art and architecture at Harvard University, are among the leading experts of Asian religions and art in the country. The exhibition is the result of several years of research by the pair in collaboration with Roger Hankins, director of the Cantor Art Gallery.

Lewis and Kim worked with curators at the Harvard Art Museums and Museum of Fine Arts, Boston; the Metropolitan Museum of Art, New York; the Freer Sackler Museum, Washington, D.C.; the Cleveland Museum of Art, Cleveland, Ohio; the Virginia Museum of Fine Art in Richmond, Virginia; and private lenders to select pieces that will illustrate the centrality of ritual in Buddhism, highlighting visual narratives that will show common practices every devotee needed to know to make good karma (punya), a central tenet of the Buddha’s teaching (dharma).

As co-curators, Lewis and Kim have achieved longtime professional goals through their work on the project.

"For me, this exhibition documents the key research focus in my scholarly career: the popular Newar Buddhist traditions of the Kathmandu Valley that have remained largely unknown among scholars and the general public. The exhibition also offered the chance to realign the universal popular understanding of Buddhism as a living religion, one that is sustained by householders and their worldly concerns," explained Lewis.

Kim’s comments echo those of Lewis, “The exhibition provides an excellent opportunity to draw attention to the lived world of the people that commissioned and used these objects, which scarcely gets mentioned in scholarly literature. Because it is an exhibition focusing on ritual art, the exhibition offers a chance to show brilliantly illuminated Buddhist manuscripts of Nepal that the public rarely gets to appreciate.  It highlights how these manuscripts are not just art objects but ritual objects that were frequently handled and used, much like a copy of one’s favorite book (or the Bible),” said Kim.

Among the objects on view will be rare manuscripts from as early as the 11th century, a magnificent Vajracharya priest’s crown from the 13th century, stupas, paintings, and a colossal nineteen-foot-long narrative scroll depicting scenes from the Svayambhupurāna from the late 18th early 19th century. Interactive, hands-on, and documentary films will highlight the ritual practices associated with the objects. Naresh Bajracharya, a visiting Fulbright professor from Kathmandu, Nepal, will bring to life several traditional customs such as creating a sand mandala, storytelling, pratistha and Vasundhara vrata practices.

Holland Cotter of the New York Times and John Guy from the Metropolitan Museum of Art, whose presentations are being co-sponsored by the Rev. Michael C. McFarland Center for Religion, Ethics, and Culture, are two of the many distinguished speakers invited to campus to give lectures that will provide an understanding, context, and significance of various important objects in the exhibition.

The project has been awarded a grant from the National Endowment of the Humanities in the amount of $100,000 in support of mounting the exhibition. “We are extremely fortunate to have received NEH funding, awarded to one in eight projects, which has allowed this project to proceed in a way that wouldn’t have been possible without it”, Hankins stated.

A catalogue, published by Brill, will be available for sale at the Gallery, and a website documenting the exhibition can be accessed at https://dharmapunya2019.org.

NOTE: Locations subject to change, please confirm prior to the event.

About the National Endowment for The Humanities

Created in 1965 as an independent federal agency, the National Endowment for the Humanities supports research and learning in history, literature, philosophy, and other areas of the humanities by funding selected, peer-reviewed proposals from around the nation. Additional information about the National Endowment for the Humanities and its grant programs is available at: www.neh.gov.