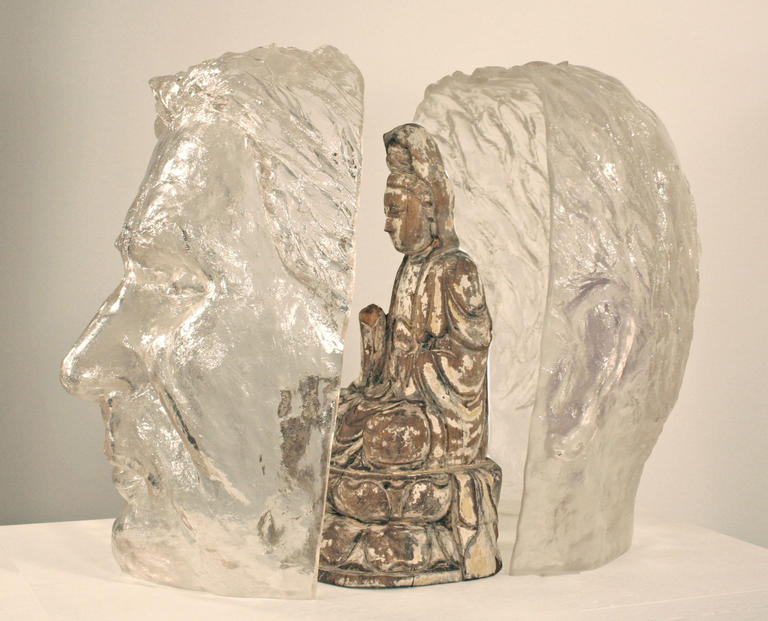 Massachusetts-based artists Yin Peet and Viktor Lois have collaborated on installations and performances in Europe and Taiwan since 2002. In this, their first installation in the U.S., Peet and Lois draw upon both Asian and Western traditions of art in relation to the set of anonymous wooden Daoist deity sculptures they found in central Taiwan in 2005. As artists, they have responded to these sculptures using elements of archeology, cultural and religious practice, painting, and sculpture.  Taiwanese artist Ming De Tai has documented the project with photographs.  The installation explores themes of artistic intent and inspiration, religious belief, and intellectual curiosity in order to promote an understanding of Taiwanese deity culture.

In December 2005, while on a trip to visit a Mi-Le Buddha Temple, Lois and Peet found a line of deity statues neatly arranged under a highway bridge that was still under construction. Covered in mud, many were half-finished and broken. Three local construction workers told them that the statues had been there since they began work on the bridge two years earlier.  No one had dared to pick them up as Taiwanese deeply believe that a wild, unsettled spirit, good or bad, can “borrow temporary residence” in a statue. Nevertheless, as sculptors who create objects, their immediate reaction was to “save” the “unfinished soul-artwork.”

As they started gathering the deities, they found many more buried in the mud, which appeared to be much more damaged. They faced a dilemma: “to take or not to take.” They then decided that if they were here to save them, it must be all or none, no matter how badly some were damaged. As their decision became clear, the head construction worker came over and said, “You are good to save them all. Since you are creators of objects, these deities have indeed met the right people.” They estimated there might be around fifty deities. However, upon returning to their studio, they counted a total of 153 (152 statues and one broken head and a small part of a limb).

Their rescue intended to push craftsmanship into fine art, from temple to museum, from deity power to human creativity, and from mundane culture to artistic culture. Instead of “fixing” and “finishing up” the unfinished art work, they decided to make a portrait of each deity’s statue as an artistic interpretation, thereby maintaining the work of the anonymous traditional local Taiwanese artisans whose work had been started but somehow interrupted. Creating their interpretation without actually changing the original art work fulfilled an ideal, one that acknowledged that different generations of artists pass on the artistic baton and construct bridges for new generations of audiences to understand the aesthetics and value of the artifacts.

A native of Taiwan, Peet received her M.F.A. from the Massachusetts College of Art and is an adjunct professor at the College of the Holy Cross where she is currently teaching the course “The Art of East Asia” through the Center for Interdisciplinary and Special Studies. Lois was born and raised in Hungary and is known for his sculptural musical instruments, which make use of the refuse of industry, endowing machines with a new creative life. Both artists have exhibited extensively in Taiwan, Europe and the U.S.

The artists received support for their installation through the Taiwanese Consulate in New York, Taipei Cultural Center. Additional support for this exhibition from the Asian Studies Program at Holy Cross.

A series of events will be held at Holy Cross in conjunction with the gallery exhibition.  All events are free and open to the public.