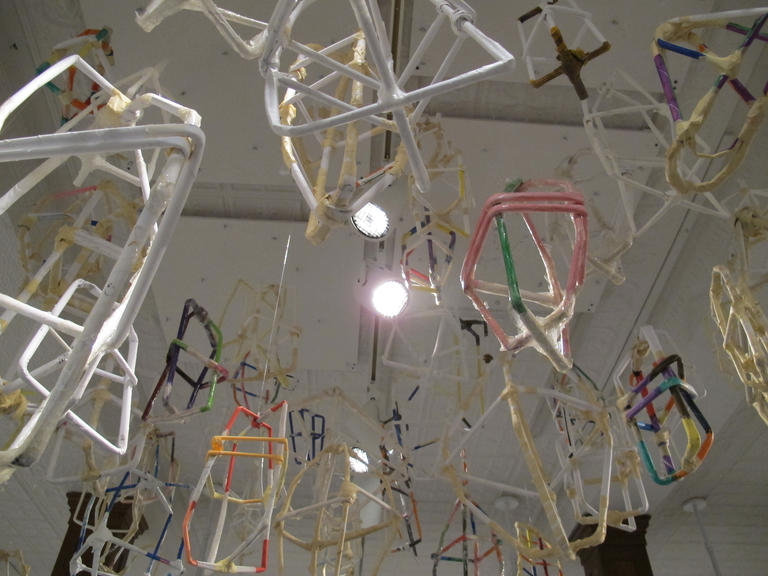 The Iris and B. Gerald Cantor Art Gallery at the College of the Holy Cross will exhibit artwork produced over the last 20 years at the leading centers for artists with disabilities in the U.S. The exhibition, titled "Create," honors the history of three pioneering arts programs in California and celebrates the talent of the remarkable individuals whose work is featured. The exhibit will be presented in two installments: Aug. 29 - Oct. 6 and Oct. 22 - Dec. 8, 2012.

San Francisco's Creativity Explored, Oakland's Creative Growth Art Center, and Richmond's National Institute for Art and Disabilities Art Center (NIAD) were founded by Florence Ludins-Katz, an artist and educator, and Elias Katz, a psychiatrist, who developed each of these programs beginning in the 1970s. Their methodology, progressive in its approach, combined access to group studio practice and professional work practices, and gave the artists an avenue to be included in the broader arts community. Today, individuals who are involved with these programs continue to produce artwork for exhibition and sale, visit galleries and museums regularly, and have access to artist mentors who assist them with developing methods and technical skills.

Work created by individuals engaged in these communities defies the stereotype of what art created by people with disabilities should look like. Lawrence Rinder, co-curator of the exhibition and director of the Berkeley Museum of Art and Pacific Film Archive (BMA/PFA)at the University of California has stated, "The artists featured in this exhibition-all of whom have some form of developmental disability-possess the talent, independence, and depth of feeling that makes the most powerful art possible."

Matthew Higgs, director of White Columns, the oldest alternative art space in New York, is also co-curator of the exhibition.

Due to its scope-more than 135 works by 20 artists will be shown-the exhibition will take place in two installments over the course of the fall semester at Holy Cross. Organized by Independent Curators International (ICI), this is the first stop on a national tour, and the first time the exhibit has traveled to the Northeast. "I know the importance of this work because of my experience curating a show with many of these same artists more than 20 years ago when I was working at UC Davis," says Roger Hankins, director of the Cantor Art Gallery. "Bringing this work to campus was something I was committed to doing."

ICI, an organization based in New York, was established in 1975 and is dedicated to acting as a conduit for emerging ideas and collaborations in the contemporary art world. In that same spirit, the Cantor Art Gallery will work with local agencies that serve individuals with challenges, including the Seven Hills Foundation, to provide inclusive programming. Curators Lawrence Rinder and Matthew Higgs will speak at the Hogan Campus Center on Wednesday, Oct. 3.

"We're hoping to engage as many visitors as possible-people with and without disabilities, contemporary art experts and enthusiasts, those interested in the disability movement, as well as individuals who simply want to experience the ability of art to empower, enlighten, and engage us all," says Hankins.

The exhibition and the accompanying catalog were made possible, in part, by Dr. James B. Pick and Dr. Rosalyn M. Laudati, and the continued support of the BAM/PFA Trustees. Additional support for the tour is made possible in part by The Andy Warhol Foundation for the Visual Arts, The Horace W. Goldsmith Foundation, and the ICI Board of Trustees.

About the Curators
Lawrence Rinder is the director of the UC Berkeley Art Museum and Pacific Film Archive, having previously held the positions of dean of the California College of the Arts and contemporary art curator at the Whitney Museum of American Art. He is also a writer of art criticism, poetry, drama and fiction.

Matthew Higgs is the director/chief curator of White Columns, New York. From 2001-04 he was curator at the CCA Wattis Institute for Contemporary Arts in San Francisco. Prior to his position at the Wattis Institute, he was an associate director of exhibitions at the ICA, in London. Since 1992, Higgs has organized more than 200 exhibitions and projects with artists. He has contributed essays and interviews to more than 50 publications and art magazines including Artforum, Frieze, Art Monthly and Afterall.

Catalog
A fully illustrated 176-page catalog (ISBN: 9780971939790, paperback; 180 pgs; color-illustrated) published by University of California, Berkeley Art Museum & Pacific Film Archive will accompany the exhibition. The publication features images of the art, an essay by Lawrence Rinder, and biographies of each of the artists by poet, author, and playwright Kevin Killian. "This publication serves as an impressive record of the exhibition and offers thoughtful insights about the significance and compelling history of these organizations, which deserve to be shared with audiences around the world," says Hankins.

The Cantor Art Gallery will be remain open following the presentation by Rinder and Higgs until 7:30 p.m.

Tom di Maria has served as Creative Growth Art Center's Director since 2000. As Director, he has worked to have Creative Growth's artists with disabilities be recognized as leading contemporary artists by presenting their work in significant museums and galleries, and by positioning their work alongside noted academically trained artists and designers. He has lectured and consulted worldwide on Creative Growth's programs and artists. He previously served as: Assistant Director of the Berkeley Art Museum/Pacific Film Archive, at UC Berkeley; and Director of Development and Marketing at the San Francisco Film Society. He holds a B.F.A. from Rochester Institute of Technology, and a M.F.A. from Maryland Institute, College of Art, in film and photography. Tom is also an award-winning filmmaker, with short film awards from Sundance, Black Maria, Sinking Creek, National Educational Media, and New York Experimental film festivals.

This program has been supported in part by a grant from the Worcester Arts Council, a local agency supported byt he Massachusetts Cultural Council, a state agancy.

Create is a traveling exhibition curated by Lawrence Rinder, with Matthew Higgs, and organized by the UC Berkeley Art Museum and Pacific Film Archive and ICI (Independent Curators International), New York. The exhibition and the accompanying catalog were made possible, in part, by Dr. James B. Pick and Dr. Rosalyn M. Laudati, and the continued support of the BAM/PFA Trustees. Additional support for the tour is made possible in part by The Andy Warhol Foundation for the Visual Arts, The Horace W. Goldsmith Foundation, and the ICI Board of Trustees.

The Iris and B. Gerald Cantor Art Gallery at the College of the Holy Cross will exhibit weavings produced by individuals participating in the Saori Weaving Project at Seven Hills Foundation day programs (in Worcester, Mass.) in the Cantor Resource Gallery, located adjacent to the main gallery space beginning on Monday, Oct. 29. The display will run in conjunction with the second installation of the "Create" exhibit, which showcases artwork produced over the last 20 years at the leading centers for artists with disabilities in the U.S., on view from Monday, Oct. 22 - Dec. 8. An opening reception for both exhibits will be held on Thursday, Nov. 1, from 4:30 - 6 p.m.

Roger Hankins, director of the Cantor Art Gallery, is pleased to be able to provide an opportunity for local artists supported by Seven Hills to share their work with the Holy Cross and Worcester communities. "The goal with the Create exhibition and the Seven Hills collaboration is to open a dialogue about the potential of every individual, regardless of their ability, to be creatively engaged and to produce work that is worthy of recognition at the highest levels."

"Create" presents 20 artists, whose work in a variety of mediums and styles, celebrates artistic achievement that has flourished in three pioneering art centers in the San Francisco Bay Area: Creative Growth Art Center in Oakland, San Francisco's Creativity Explored, and the National Institute for Art and Disability (NIAD) Art Center in Richmond.

Seven Hills day program weavers contributed three from a total of 66 banners created for the Saori Bridges of Elm Park project in 2010, sales of which supported scholarships for youth in the neighborhoods surrounding the Saori studio located off Pleasant Street in Worcester.

In the fall of 2011, Seven Hills Family Services (SHFS) Inc. received a grant from the Worcester Cultural Council, a local agency supported by the Massachusetts Cultural Council, to expand the Saori weaving opportunities to adults with significant disabilities who are enrolled in the Adult Day Health and Day Habilitation Programs located in Worcester and Devens, Mass.

According to Maribeth Fisher, assistant vice president of Seven Hills Family Services, "the grant resulted in the training of five additional staff coaches to work with individuals in creating beautiful weavings, some of which have been fashioned into functional, wearable or sculptural art."

Funds from the Worcester Cultural Council also assisted in covering the cost of thread, yarn, bobbins, and the purchase of additional inside sets, in order for individuals to work on independent projects over time.

"The collaboration with the Cantor Art Gallery and the ‘Create' exhibit was the culmination of many hours of weaving, sewing, planning, serendipity, creativity and community, reflected by the show's title ‘Community Threads: The Seven Hills Saori Weaving Project,'" says Fisher.

Wakabayashi, artist and proprietor of Saori Worcester, teaches Saori to students of all ages and abilities. She has participated in numerous local events including the Worcester Center for Crafts shows, stART on the Street, Massachusetts Special Olympics, Worcester's Asian Festival, First Night Worcester, and First Night Boston. Her work has been on display in many venues, including the Arts Worcester Gallery and the Danforth Museum of Art in Framingham.EVENTS