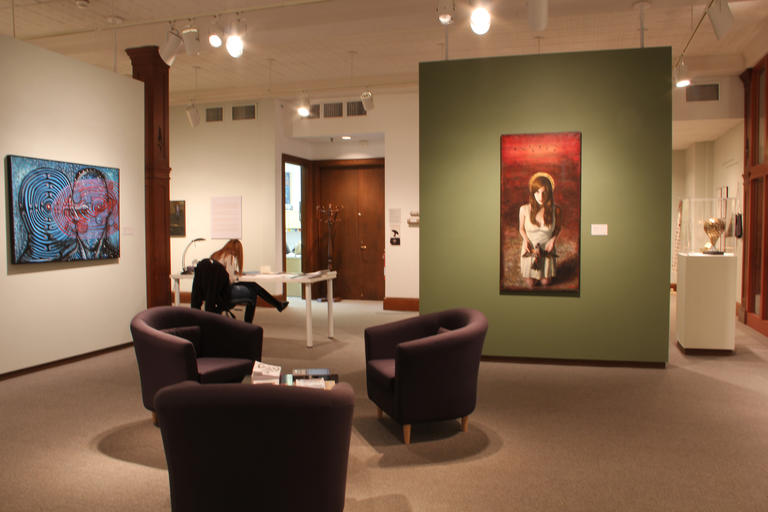 The Iris and B. Gerald Cantor Art Gallery at the College of the Holy Cross will feature two exhibitions of artwork by Argentinian and Cuban artists beginning in late January.

Painting Borges: Art Interpreting Literature, will be on view from Jan. 31 - March 21, curated by Jorge J.E. Gracia, the Samuel P. Capen Chair of Philosophy at the University at Buffalo and organized by the UB Galleries at Buffalo New York. Cuban Artists' Books and Prints, 1985 - 2008, curated by Linda S. Howe, director of the Wake Forest Cuba Project, will be on display from Jan. 31 - April 13 in the newly- named Iris and B. Gerald Cantor Foundation Resource Gallery, located adjacent to the main gallery in O'Kane Hall. An opening reception for both exhibitions is planned for Tuesday, Jan. 31, 5 -6:30 p.m.

Painting Borges is a collection of paintings, drawings, etchings and mixed media works created by 16 artists in response to stories by Argentinean writer Jorge Luis Borges. According to Gracia, who teaches philosophy at the University of Buffalo, "Jorge Luis Borges is one of the most prominent literary figures whose work is also profoundly philosophical... his stories are filled with conceptual puzzles that prompt the reader to face the most fundamental questions concerning human existence."

In consultation with the artists, Gracia chose 12 stories by Borges, which he organized according to three topics: identity and memory, freedom and destiny, and faith and divinity. Two visual interpretations by different artists are given of each story.

The initial showing of the exhibition was accompanied by a symposium, "Interpreting Borges: Art, Literature, and Philosophy," that took place in Buenos Aires in 2010. It gathered a group of international philosophers, literature scholars, and some of the artists whose work is being exhibited, to explore the artistic interpretation of literature in the context of Borges' work. Following the showing at the Cantor Art Gallery, the exhibit will travel to several other institutions before opening at the Anderson Galleries at the University of Buffalo in 2013.

For many years, there have been two primary images of Cuba, cigars and Castro.  A collection of handmade books, prints and objects created by Cuban artists and writers from a small press called Ediciones Vigía, highlights the complexities of modern Cuba and will be on display at from January 31 - April 13.

Cuban Artists Books and Prints: 1985-2008, shown previously at the Charlotte and Philip Hanes Art Gallery on the Wake Forest campus, the prestigious Grolier Club in New York City with a related symposium hosted by the Museum of Modern Art, and a number of other venues across the country, was curated by Linda S. Howe, professor of romance languages at Wake Forest University, and organized with the help of dozens of Wake Forest faculty, staff, and students.

According to Howe, Cuban Artists' Books and Prints is an opportunity to celebrate a vibrant culture. "These artists have survived cultural politics, difficult living conditions, and, at times, resource shortages that limited their access to the most basic materials, like paper."

Ediciones Vigía is a collective of accomplished young artists and writers who produce remarkably sophisticated and technically inventive works featuring writing by "once-censored or controversial national and international authors as well as children's books and musical compositions." Ediciones Vigía, a collaborative artisans' press, was founded in 1985 in Matanzas. Its limited editions of works by leading Cuban and foreign authors, like García Lorca, Szymborska, Rilke, Dickinson, and Rimbaud, are designed and illustrated primarily by Rolando Estévez. Many are collaged with cloth, leaves, or wood scraps, making them unique; some are made as scrolls for hanging.

"These works comment on daily existence, reflect awareness of international art currents, and draw on Cuban history and its traditional and popular cultures. Adaptation means making art despite privations, especially since the dissolution of the Soviet Union ended subsidies to Cuba," Howe says.

Cuban Artists' Books and Prints 1985 - 2008 is supported in part by a grant from the Worcester Arts Council, a local agency which is supported by the Massachusetts Cultural Council, a state agency.