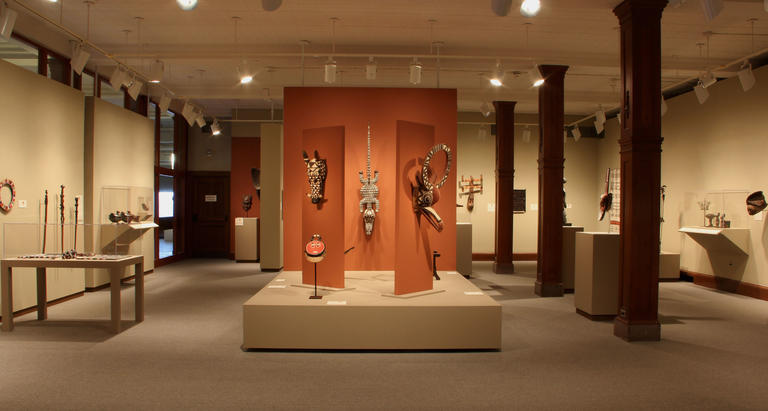 Art of Africa: Objects from the Collection of Warren Robbins

The Iris and B. Gerald Cantor Art Gallery at the College of the Holy Cross presents Art of Africa: Objects from the Collection of Warren Robbins, organized by International Arts & Artists in Washington, D.C., a non-profit arts service organization dedicated to increasing cross-cultural understanding and exposure to the arts internationally, through exhibitions, programs and services to artists, arts institutions and the public. The exhibition will be on view from Jan. 27 - Mar. 31. An opening reception will take place on Wednesday, Feb. 9 from 5 - 6:30 p.m. at the Gallery.

Art of Africa presents more than 60 objects including sculpture, textiles, beaded clothing and jewelry, which broadly represent the creativity and diversity of artistic expression of nearly 30 cultures of sub-Saharan Africa. Accompanied by music and photographs, the exhibition will illustrate the broader cultural context in which these art forms were created and used. The collection is on loan from the Center for Cross Cultural Communication in Washington, D.C., Worcester native Warren Robbins, its founder and director, is also founding director emeritus of the National Museum of African Art, now a branch of the Smithsonian Institution.

After leaving the State Department in 1962, Robbins established an interdisciplinary educational institute, the Center for Cross Cultural Communications, out of his Capitol Hill home. A year later, Robbins purchased the Washington home of abolitionist Frederick Douglas and opened the Museum of African Art on Capitol Hill, the first museum in the U.S. devoted exclusively to the rich, creative heritage of Africa. Its stated purpose was "to foster a deeper understanding of African culture, its history, its values, its creative tradition" and its relevance to lives of contemporary Americans. In 1979, through an act of Congress, the museum merged with the Smithsonian and Robbins donated its premises, library and entire collection to the nation. In 1987, the National Museum of African Art moved into its present building on the Federal Mall, and named the library in Robbins' honor.

Originally collected by European explorers and ethnologists as academic specimens or curios, African sculptures had, by the end of the 19th century, begun to accumulate in European natural history museums and found their way into the hands of dealers in antiques and the "exotic" arts. At the beginning of the 20th century, a handful of European artists in France and Germany were intrigued by the unique forms and styles of African art and began to draw creative inspiration from them. The aesthetic significance of African art became highly appreciated and respected in Europe and served as a catalyst for the artistic revolution that ushered in modern art around the world.

Kwaku Ofori- Ansa, the curator for the exhibition, is an associate professor of African art at Howard University, Washington, D.C. Born and raised in Ghana, West Africa, he has curated several contemporary and traditional African art exhibitions in Ghana and in the U.S. and has led study abroad tours to Ghana for the past six years.

Born and raised in Worcester, Massachusetts, the youngest of 11 children of Jewish immigrants from Ukraine, Robbins received an M.A. in history from the University of Michigan, where he also studied cultural anthropology, and a B.A. in English from the University of New Hampshire, which is among several colleges that have awarded him an honorary degree. Among his many honors, he was the recipient of the Smithsonian's prestigious Joseph Henry Medal. In 1996, the School of Art and Design of the University of Michigan dedicated its new Warren Robbins Center for Graduate Studies recognizing the "outstanding achievements of a University alumnus."

Art of Africa has travelled to over a dozen institutions across the country including the Thorne-Sagendorph Art Gallery at Keene State College, N.H. (Sept. 1 - Oct. 27, 2010). The schedule will continue at the MacNider Art Museum, Mason City, Iowa (April 21 - June 19, 2011); Howard University Gallery of Art, Washington, D.C. (Sept. 5 - Nov. 28, 2011) following the showing at the Cantor Art Gallery at Holy Cross.

Because the conventions of art in 19th century Africa differed from those in 19th century Europe, it was difficult for Europeans to recognize expressive objects as art and by extension those who made them as artists. This talk looks at individuality in traditional works of art (and how we are not encouraged to see this in standard museum exhibits) and examines specific African cultural ideas about the artist and about creativity in their historical context.

Professor Newell will consider the ways in which consumer brands resemble masking practices, concealing even as they reveal, using the visible to both hide and represent the invisible. Masks and brands both metaphorically delineate an invisible connection to authenticity, but the secrecy of what lies beneath the masked performance provides an unstable ambiguity in which it is always possible that the surface IS that which it represents. He will also examine how these performances relate to the problematic and dangerous reinterpretations of national identity in contemporary Côte d'Ivoire, which have destabilized the country and led to the election of two presidents, over whom Ivoirians cannot agree which is the fake and which the real.

African Art is viewed quite differently in 2010, than it was in 1910, 1810 or 1710. Changes in perspective relate to increased contact over time, changes in Western art (provoked in part by African works) and enhanced understanding of both the African context and our Western prejudices.

All talks are co-sponsored by the Africana Studies Program

An additional special exhibition of contemporary East Balinese textiles from the Permanent Collection of the Cantor Art Gallery will be featured in the hallway gallery adjacent to the Cantor Art Gallery during the spring semester 2011. The exhibition is guest curated by Holy Cross anthropology and sociology professor Susan Rodgers and Robin Cumella'11, and represents the results of joint fieldwork to interview geringsing dyers, weavers, and brokers in Bali in the summer of 2010. Their research was funded by the Dean's office, a Mellon summer research fellowship for Cumella, the W. Arthur Garrity Professorship and the Iris and B. Gerald Cantor Art Gallery.

In the spring semester of 2013 the Cantor Art Gallery will present a broader-based exhibition of Southeast Asian textiles titled Transnational Ikat, again drawn from both the Cantor Gallery collection, as well as private collections.

Founded in 1983 through the generosity of Iris & B. Gerald Cantor, the Cantor Art Gallery serves both as a venue for a changing series of historical and contemporary public exhibitions, as well as a vital resource for Holy Cross faculty and students, linking exhibitions to the broader liberal arts curriculum.

The College of the Holy Cross (holycross.edu), located in Worcester, Massachusetts, is among the nation's leading liberal arts institutions. A highly selective, four-year, exclusively undergraduate college of 2,900 students, Holy Cross is renowned for offering a rigorous, personalized education in the Jesuit, Catholic tradition. Since its founding in 1843, Holy Cross has made a positive impact in society by graduating students who distinguish themselves as thoughtful leaders in business, professional and civic life.

Art of Africa: Objects from the Collection of Warren Robbins