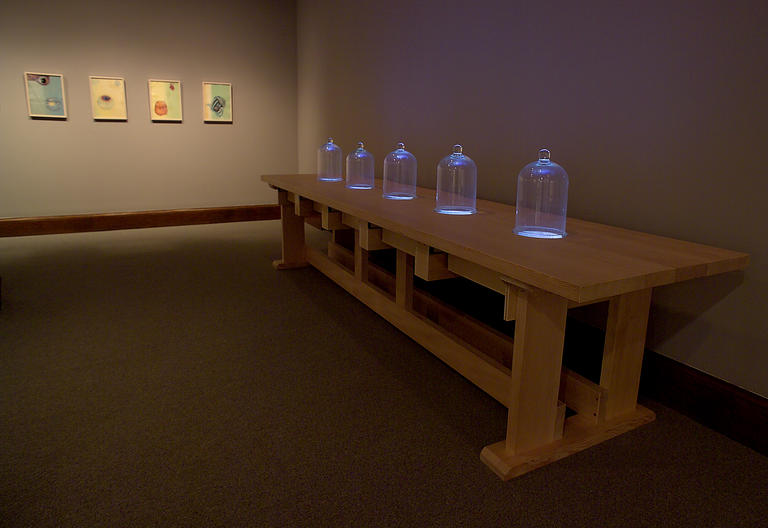 The exhibition draws on similarities to Jorge Louis Borges’ 1957 anthology, Manuel de Zoologia Fantastica or Book of Imaginary Beings, in which Borges compiles descriptions of fauna from distant mythology as well as those which sprang from the imaginations of Poe, Homer, Shakespeare, C.S. Lewis, Kafka and Confucius. Similar to the historical descriptions in Borges anthology, the artists in the exhibition have each created bodies of work which relate their personal interpretations of the natural world, or that focus on nature as it has been increasingly altered by science through genetic manipulation. Borrowing from mythology, children’s literature, field work at World Heritage Sites, biomedical research, and often contemplating modern society’s competition with animals for the natural resources to sustain biodiversity, these seven artists bring challenging issues into extraordinary paintings, assemblage, drawings, and video works.

Zoologia Fantastica artists:
Christine Baeumler teaches at the University of Minnesota, Minneapolis. Baeumler has been producing a series of portraits of endangered species through drawings, paintings, and video. These portraits are often based on her research at World Heritage Sites, including the Australian Rain Forest, the Galapagos Islands, and the Great Barrier Reef off the coast of Australia.  The Cantor exhibition will be showing a recently made video and installation piece inspired by the theories of Charles Darwin that Baeumler developed after a research grant allowed her to spend several months on the Galapagos Islands.

Boston-based artist Brian Burkhardt (www.bburkhardt.com) creates small lifelike creatures that at once appear to be actual plants and animals preserved under glass but in fact are his invented species of organisms that he assembles from scrapes of detritus and from various modeling materials. The resulting “life” forms often incorporate corporate logos, cell phones, or bits of plastic into their bodies to form a synthesis or hybrid of nature and culture. Burkhardt’s sculptural skill, intellect, and sharp sense of humor merge to create small-scaled environments that one might encounter at a natural history museum of the future.

New York artist, Catherine Chalmers (www.catherinechalmers.com) has shown her large-scale photographs and videos of insects and lab mice at various moments of their life cycles in galleries and museums throughout the United States and Europe. In a recent series titled Food Chain, Chalmers investigates the place of insects in the hierarchy of the living, photographing with technical precision the linkage between predator and prey, eater and eaten, from plant to insect to amphibian.  Zoologia Fantastica will exhibit a series of Chalmers’ large scale C-print portraits of genetically engineered mice which possess characteristics that force the viewer to confront the reality of gene splicing and alteration on “lower” life forms.

Kelli Scott Kelley (www.kelliscottkelley.com) has been on the faculty at Louisiana State University in Baton Rouge since 1999. Scott Kelly, a painter, printmaker, and performance artist, creates narrative paintings and drawings where personal symbols blend with universal icons, often borrowed from the illustrations of animals in children’s picture books. The work that will be included in Zoologia Fantastica alludes to the contradictions between the reality of contemporary conditions for wild animals in our environment and the images of animals living in imaginary worlds of “cuteness,” where the warm and fuzzy constructions of pop culture reside.

Mary Kenny (www.marykennyartist.com) is a Boston-based artist who creates stop-action animated films that were conceived after a frightening personal encounter with a bear in Yosemite National Park. Kenny explains, “As a city girl, I hadn’t realized the unnerving and unpredictable realities of nature and wildlife. This brush with my own mortality led me to examine cultures living in extreme environments, in close proximity to dangerous animals.” Kenny’s short films have a disarmingly low tech “look” about them in the tradition of children’s literature, picture books and animation, from the Brothers Grimm to South Park, while conveying the unsettling nature of the relationship between the hunter and hunted.

Amy Ross (www.amyross.com) is also a Boston-based painter who attended the School of the Museum of Fine Arts Boston from 1999 – 2000; prior to that she earned a BA in Religious Studies from Connecticut College in 1994 and a Master of Theological Studies from Harvard Divinity School in 1997. From a recent artist statement Ross explains, “I am interested in the idea of artists as mad scientists. My drawings offer visual hypotheses to the question: what would happen if the DNA sequence of a plant or mushroom were spliced with that of an animal? Using graphite, watercolor, and walnut ink on paper as well as directly on gallery walls in site-specific installations, I portray animals morphed with branches, mushrooms, berries, and blossoms, thus forming implausible hybrid creatures. These images subvert the traditional genre of botanical illustration by approaching the close study of the natural world through the lens of genetic engineering and mutation gone awry.”

Karl Unnasch (www.karlunnasch.com) is a sculptor living and working in rural Minnesota, whose work is deeply related to his experiences growing up on a family farm in rural Minnesota. He received his BFA degree in 1995 from Winona State University, Winona, Minnesota and his MFA degree from the University of Massachusetts, Dartmouth in 2003. Unnasch’s tableaus and vignettes combine rusticated found objects, some natural materials, and the desiccated carcasses of animal road kill found in the rural setting where he lives. Unnasch works these castaway things into exquisite meditations on our contemporary disconnect from the natural world. In recent years, his work has been the subject of a Minnesota Public Radio program and numerous exhibitions in galleries in New York, San Francisco, Seattle, Boston, and at MassMoca in North Adams, Massachusetts.

In conjunction with the exhibition Zoologia Fantastica, the gallery will host a series of artist’s talks and forums on the themes explored by these seven artists, as well as other contemporary artists working with animal imagery.