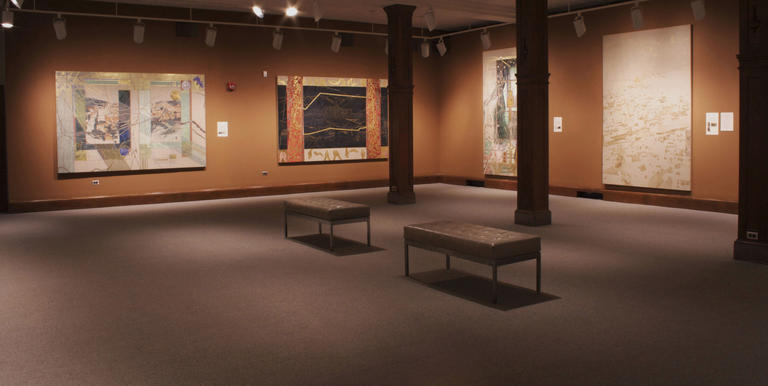 The Iris and B. Gerald Cantor Art Gallery at the College of the Holy Cross presents Cities of Peace: A Suite of Monumental Gold-Illuminated Paintings from the Ellen Frank Illumination Foundation. The exhibition, which honors the history and culture of cities that have suffered major trauma, will run from Oct. 21 – Dec. 16, 2009. There will be an opening reception on Oct. 21 from 5 – 7 p.m. in the gallery, with opening remarks by Ellen Frank, founder of the Illumination Arts Foundation.

Cities of Peace is a series of nine 6 x 8 foot gold-illuminated works on canvas consisting of a visual tribute to the people and locations around the world where violence and tragedy through war or conflict and ideological extremism in modern times have left horrific reminders of man’s destructive power.  The Cites of Peace project and exhibition was started as an ambitious idea to unite people and the visual arts through dialogue about issues of peace.

“If we understand the history and beauty of what has been damaged or destroyed, we can participate in the beauty of recovery and peace,” explains Frank.

Cities of Peace focuses on nine cities that have experienced major conflict and trauma in the 20th and 21st century:  Baghdad, Beijing, Hiroshima, Jerusalem, Kabul, Lhasa, Monrovia, New York and Sarajevo. A visit to Jerusalem in 1999 by Frank inspired her to produce the first painting in the series and to visualize the creation of other works representing additional cities that have survived strife. Frank’s goal for the series was to direct action through hopeful acts and to celebrate the best of the human spirit, and to transform anguish into beauty.

Jan Oberg, executive director of Transnational Foundation for Peace in Sweden, praises the exhibit:  “Cities of Peace superbly promotes ethics, dialogue and inner calm--so overlooked in our world as tools, as language, for peace and peaceful co-existence. Cities of Peace should not only be exhibited in New York or Geneva but in war zones, in schools and art halls where they could give hope and inspiration.”

The large scale paintings, created on linen, evoke artistic traditions as diverse as illuminated manuscripts, icons, tapestries, embroidery, architectural mosaics, woodcarvings, and metalwork. Mica, bronze powders, and many types of gold leaf create multilayered imagery that shimmers and resolves itself into successive scenes of time, place, and humankind. Crimson leaf, the color of our blood, is tucked into each painting to honor the dead. Text, in the tradition of micrography (words shaped into images), appears in some of the works. The arts of each country portrayed are incorporated into the paintings. While serving as memorials to particular eras and locations, the paintings also become border crossings that enable visions of greater compassion and heightened consciousness among peoples.

The works were all produced at the Ellen Frank Illumination Arts Foundation in East Hampton, New York. The purpose of the foundation is to enhance understanding of the art and history of the historic forms and conventions of illumination among artists and the public and to enable the creation of new work in this historic technique, in part through education and training.  Since its inception the Illumination Atelier (internship program) has sponsored 17 students to work at its facility on Long Island from China, Korea, Colombia, Estonia, Japan, Poland, and the United States, under the artistic direction of Frank.

Frank studied art history and connoisseurship at Yale University and holds an inter-disciplinary doctorate in English literature and the visual arts from Stanford University. She is a recipient of a Fulbright Fellowship, a Ford Foundation fellowship, and grants from the National Endowments for the Arts, the Pollock-Krasner Foundation, the New York State Council on the Arts, and the New York Foundation for the Arts. Frank founded the nonprofit Ellen Frank Illumination Arts Foundation in 2005.

A series of lectures and events will be held at Holy Cross in conjunction with the gallery exhibition.  All events are free and open to the public.

Also on view at the Cantor Gallery

Ukiyo-e Japanese Woodblock Prints, Selections from the Collection of John Rossetti, curated by artist James Tellin and John Rossetti, will remain on view in the gallery’s entrance through December 16. Rossetti, who began collecting Japanese prints in college, has been collections care manager and chief exhibition designer at the Davis Museum at Wellesley College for the past 16 years and is a former chief exhibition designer at the Worcester Art Museum. The exhibition features prints depicting a range of subjects created by Toyohara Chikanobu, 1838-1912; Konishi Hirosada, 1819-1865; and Kobayashi Kiyochika 1847 – 1915, as well as other artists of the mid - late 19th-century.

In the first floor hallway space of O’Kane Hall, a selection of 35 black-and-white photographs and 35 poems titled Kathryn Cahill: Poems and Photographs, will also be shown through December 16. The work of the late artist represents observations of the simple details of life that are often overlooked or missed. Cahill graduated from Rosemont College and the New York Institute of Interior Design. She authored two books: a novel, Inside Out: A Portrait of a Family and a book of photography, A Walk About Town. Her creative spirit found expression mainly through poetry, but she also pursued ceramics, gardening, painting and photography in her efforts to share a love of beauty and wonder with the world as she encountered it.

Video: The Making of Cities of Peace Part 1