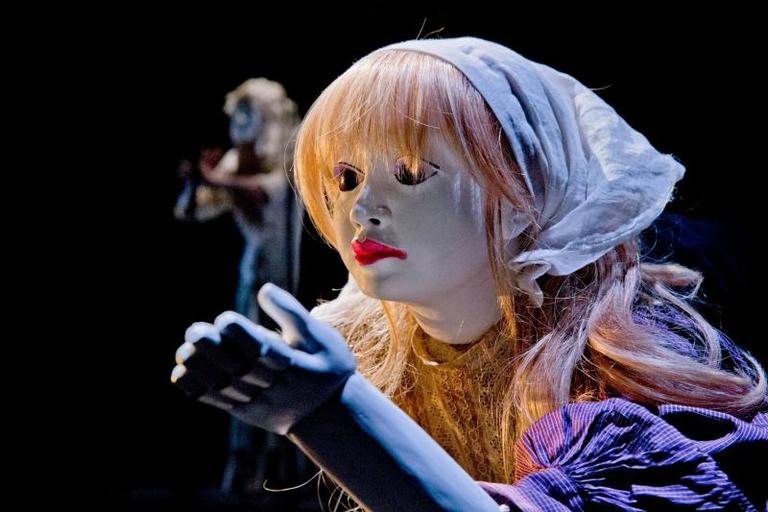 Figures of Speech Theatre
with the Holy Cross Chamber Singers

Winner of the 2008 Pulitzer Prize in Music, Lang's exquisite score recasts the H.C. Andersen classic about the suffering and death of a child in the tradition of Bach's Passion music, elevating her sorrow to a higher plane.

About Figures of Speech Theatre 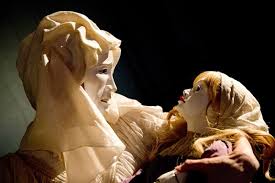 Maine-based Figures of Speech Theatre creates and tours visionary works of performance forged at the intersection of poetry, music, sculpture and dance. Drawing on the artistic genius of many collaborators, the company guides adventurous audiences on journeys where, in the words of one reviewer, "layers of reality vs. abstraction, of reality vs. performance, of perception itself, are gently explored."   More »

About the Holy Cross Chamber Singers

The Chamber Singers, under the direction of Allegra Martin, is a select auditioned choral ensemble of approximately 16 singers who display the highest level of musical excellence. As an outreach ensemble for the College, the Chamber Singers perform at collegiate and alumni functions, short-range tours in the New England area, and other events. In the Fall of 2017, through Arts Transcending Borders, they collaborated with Theatre of War Productions and the Phil Woodmore Singers to present Antigone in Ferguson at Holy Cross. They present a challenging repertoire ranging from classical part songs and Renaissance motets to contemporary choral music.

John Farrell's artistic explorations are rooted in his love of poetry and sculpture. John co-founded Figures of Speech Theatre in 1982 with dancer/designer Carol (Llewellyn) Farrell. Together they forged a unique vision of performance incorporating puppets and actors, masks, music, and dance. They have created 18 original works of theater, and toured the world for over 30 years. John has been an artist-in-residence at numerous colleges and arts centers, and has studied with the Japanese master puppet builder Toru Saito. In 1999 he was one of five American artists awarded a Creative Artists' Program Fellowship from the Japan-United States Friendship Commission, allowing him to spend 6 months in Japan studying Japanese theater and gardens. John currently serves on the board of directors of the Jim Henson Foundation. The Maine Arts Commission awarded him an Individual Artist Fellowship in 2002.

Carol Farrell began performing experimental theater in 1971 with the New World Energy Theatre in Switzerland, then moved to San Francisco to study dance. After returning to New England and completing a Master's degree in Theater Design, Carol joined the theater faculty at the University of Maine as Costume Designer, until visions of creating whole worlds from scratch inspired her to co-found Figures of Speech Theatre with husband John in 1982. She has studied at the Institut international de la Marionnette in France, and served on the Board of the international puppetry association, UNIMA USA. Since 2011 Carol has worked as the Costume Director for the Department of Theater and Dance at Bates College. With FST Carol wears many hats, including writing and designing plays, performing, and creating teaching programs.

Ian Bannon arrived in Maine to study creative nonfiction at the Salt Institute for Documentary Studies after graduating from Juniata College with a degree in Psychology & Theatre. Ian then served as Assistant Director of Short Fuse Interactive, a company providing customized dramatic training for the workplace. He has studied storytelling with Milbre Burch and Antonio Rocha, performing objects with Theodora Skipitares, improvisation with Keith Johnstone, and collaborative theatre with Sojourn Theatre's Michael Rohd. Ian is also a founding member of the new Celebration Barn Ensemble, based in South Paris, Maine. He has served as FST's Director of Education since 2005, and for the past four years has successfully directed the FOSSE (Figures of Speech Student Ensemble).

TEDx: Figures of Speech — The Puppet as Metaphoric Being