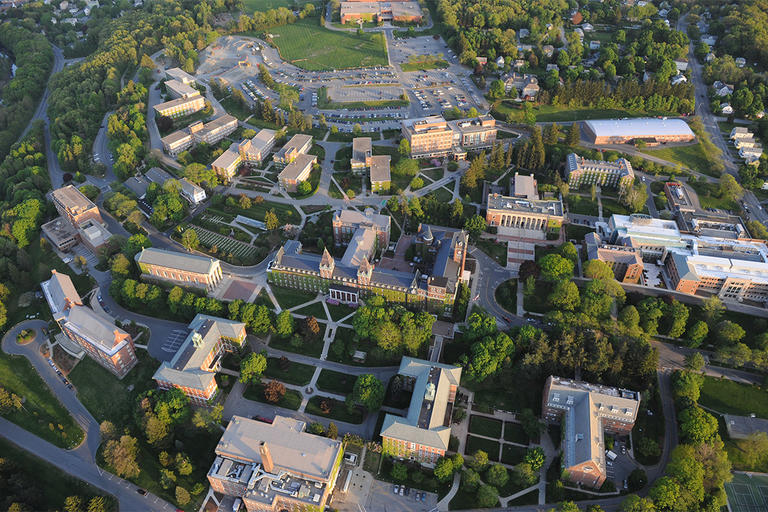 In 2018, more than 30 buildings occupy the College's sprawling grounds.

1990 As many as 250 students attend silent five-day retreats, an adaptation of the Spiritual Exercises of St. Ignatius of Loyola, facilitated by the chaplains' office. Students showed consistent interest in the retreat programs, as well as service projects to Appalachia during spring break and international immersion trips since the office's founding in 1971.

March 25, 1991 Ciampi Hall, named after Rev. Anthony F. Ciampi, S.J., is opened for the Jesuit community on the 500th anniversary of the birth of St. Ignatius Loyola, founder of the Jesuits. The new building allowed Loyola Hall, where the Jesuits previously lived, to be converted to student housing.

1991 Latin American Student Organization (LASO) and All Students Interested in Asia (ASIA) gain recognition and funding from the Student Government Association. Their formalization reflected growing number of Hispanic and Asian students on campus.

1991 Women's basketball team wins the Patriot League Championship and upsets nationally ranked Maryland, 81-74, in the NCAA Tournament opener at the Hart Center. It marked the women's first NCAA tournament win. After moving to Division I, the program became the College's most consistently successful program. They won the championship again in 1993.

1991 First Year Program is adopted. Students who opted in were placed in the same residence hall and took one course together. The goal was to establish a student intellectual community, to promote discussion among participants and to encourage active student participation. One-hundred sixty-five students and seven faculty members participated in the pilot year.

1993 Millard Art Center is dedicated. The center is comprised of two structures, one of which was converted from its former use as the Air Force ROTC building. The facility honors the Millard Family and offers space for studio art.

1994 A language requirement put into effect obligates students to have an intermediate knowledge of one foreign language upon graduation; the College is awarded $535,000 from the Mellon Foundation to support a new approach to language instruction.

1994 Brooks Concert Hall, named after Rev. John Brooks, S.J. '49, is dedicated. The space had previously served as the Fenwick chapel and would now be used for concerts and convocations.

1995 Haberlin Hall's chemistry laboratories are renovated using a $900,000 grant from the National Science Foundation, the largest foundation grant in college history at the time. The new laboratories were state-of-the-art and included new equipment, furniture and lab accessories.

1997 Holy Cross is ranked 22nd among the nation's most wired campuses according to Yahoo! Internet Life, which ranked colleges' and university use of computers and the internet.

1997 Odyssey program begins. The one-week program for multicultural and international students was designed to immerse incoming students in the academic and campus atmosphere unique to Holy Cross before the start of their first semester.

1998 Smith Wellness Center, named after Carol and Park B. Smith '54, opens as a two-story facility connected to the Hart Center. The space provides state-of the art fitness equipment for varsity athletes and all members of the Holy Cross community.

1998 Balinese Arts Program begins. The program was created to introduce students to the rich traditions of Balinese culture by welcoming some of the world's foremost Balinese musicians and dancers as full-time visiting faculty members.

1998 First Sanctae Crucis Awards, the highest non-degree recognition bestowed by the College on alumni, are presented for professional achievement and outstanding community service.

1999 Rev. Anthony Kuzniewski, S.J.'s book, "Thy Honored Name: A History of the College of the Holy Cross, 1843-1994," is published. A result of 12 years of research, the book serves as the authoritative history of Holy Cross.

1999 Chapel Choir performs at St. Peter's Basilica in the Vatican and had an audience with Pope John Paul II.

2001 Smith Hall, named after Carol and Park B. Smith '54, who donated $10 million to the project ( the largest gift in College history at the time), opens. The building is a 55,000-square-foot structure that abuts O'Kane and Fenwick halls. Set in the center of campus, it houses a library, offices, the Center for Religion, Ethics and Culture, and the religious studies and philosophy departments.

2001 First-annual Academic Conference is held on campus, designed to provide students with an opportunity to present the results of their independent work produced across disciplines over the course of the year.

2003 New residence hall opens for seniors who are offered apartment-style living on campus for the first time. The building was the first new residence hall to be built in 35 years. It was named Williams Hall, after Edward Bennett Williams '41, in 2008.

2006 Nearly $20,000 is raised by the campus community for Hurricane Katrina hurricane relief.

2006 Men's hockey team makes history with their defeat of No. 1 seed Minnesota in the NCAA Tournament. Holy Cross was the first No. 4 seed to upset a No. 1 seed.

2006 Holy Cross completes capital campaign "Lift High the Cross" at a record $216.3 million, surpassing the original goal by $40 million and making it the most successful capital campaign in College history. The funds aided in establishing 12 new faculty positions and more than 75 newly endowed scholarships for students; supporting renovation and construction of new facilities such as Williams Hall; and contributed to the overall long-term financial health of the College.

2006 Wifi is available in all residence halls and is rolled out to the rest of campus over the next few years.

2008 The First Year Program becomes the Montserrat program, expanding to include all first-year students, integrating their academic, co-curricular and residential experiences through a living-learning curriculum.

2008 Anthony Fauci '62, director of the National Institute of Allergy and Infectious Diseases, receives the 2008 Presidential Medal of Freedom, the nation's highest civilian medal, for his work as a physician, medical researcher, author, and public servant dedicated to developing cures for diseases. He was presented the award by President George W. Bush.

2008 Comfortable, laptop-friendly furniture is installed in Dinand Library, leading to a 30 percent increase in the building's traffic.

2008 The College no longer provides telephones for residence hall rooms, while still providing dial-tones if students wanted to bring their own phones. By 2012, dial-tones were only provided upon request.

2009 50 students travel to Washington, D.C. to witness the historic inauguration of Barack Obama, the first black president of the United States.

2010 The Integrated Science Complex, the most ambitious building project in College history, is dedicated. The complex links the new Smith Laboratories with Beaven, O'Neil and Swords halls, as well as Haberlin Hall, which was renovated top-to-bottom as part of the project. It also integrates the classrooms, labs, offices and lecture spaces of the departments of biology, chemistry, mathematics and computer science, physics, psychology and sociology and anthropology.

2010 Holy Cross ranks first in student participation among baccalaureate institutions for long-term study abroad programs, according to a report released by the Institute of International Education. The College has retained the first-place ranking to present.

2011 Figge Hall, named after John K. Figge '59, opens next to Mulledy Hall and the Hart Center. The 156-bed townhouse-style residence hall provides additional housing for members of the senior class.

2012 "Fraternity," a book by Bloomberg BusinessWeek's Diane Brady, is released. It tells the story of some of the first black students at Holy Cross and their relationship with Rev. John E. Brooks, S.J. '49, who worked to recruit and mentor them. The book received national attention, including coverage on NBC's "Today" show.

2012 Holy Cross celebrates the 40th anniversary of coeducation through a yearlong program of events dedicated to reflecting upon and recognizing the women who have shaped the College over four decades.

2013 College receives $25 million gift from Cornelius Prior Jr. '56 to enhance the arts with a new arts facility, at the time the largest single gift in College history.

2013 Susan Rodgers, professor of anthropology, is named the 2013 Massachusetts Professor of the Year by the Carnegie Foundation for the Advancement of Teaching and the Council for the Advancement and Support of Education. The award, presented to Rodgers in Washington, D.C., is the only national program to recognize excellence in undergraduate education.

2013 Become More: Campaign for the Future of Holy Cross begins with a $400 million goal.

2014 Arts Transcending Borders, funded by a $600,000 Mellon Grant to enhance the arts curriculum, is established. The initiative was designed to infuse the fine and performing arts in students' academic lives and create new opportunities throughout the curriculum and community by transcending cultural, geographic and disciplinary boundaries.

2014 A community "learn-in" was held in response to the lack of indictments in the deaths of Michael Brown and Eric Garner, both black men. Before a full room of students and staff, faculty members offered a series of short presentation on issues sparking national conversation, such as police brutality, racial injustice, unconscious bias and social movements.

2016 Men's basketball team makes it to the first round of the NCAA Tournament after winning the Patriot League Championship and beating Southern in the First Four round, 59-55. An article by Time.com reported that if the NCAA men's basketball tournament was determined by performance in the classroom, Holy Cross would be crowned national champions.

2016 Mulledy Hall (named after the College's first president) is renamed Brooks-Mulledy Hall in light of the institution's connection to slavery. The renaming integrates the name of Rev. John E. Brooks, S.J. '49 in recognition of his efforts to integrate the campus in the late 1960s. The decision came after a committee was charged with exploring the College's institutional history in connection to slavery and how the College should address the legacy of slavery.

2017 Students organize first Women in Science Day for female high school students and undergraduates, designed to celebrate women in the sciences and empower attendees to pursue education and professions in STEM fields.

2017 Annual Fund exceeds $10 million for the first time, a success due to a record number of donors.

2018 The student newspaper, "The Crusader," changes its name to "The Spire" after undertaking a process, independent of the College's, to discern the appropriateness of the publication's name.

2018 Hart Center at the Luth Athletic Complex is dedicated. The building is named after John Luth '74 and Joanne Chouinard-Luth, who gave a $32.5 million donation toward the building, the largest gift in College history to date. The complex features an indoor turf practice field, new basketball facilities, expanded sports medicine, and strength and conditioning space.

2018 The J.D. Power Center for Liberal Arts in the World, named after J.D. Power III '53, opens. The center offers students a range of opportunities to build skills and gain a competitive advantage beyond the classroom.