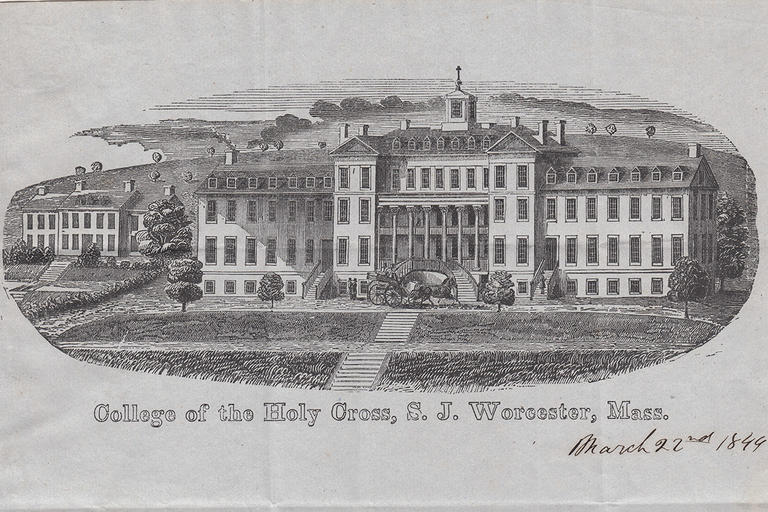 The College Building, later named Fenwick Hall, was an all-purpose building for the College in its early years.

Feb. 2, 1843 The property that would become the Holy Cross campus is purchased by Bishop Benedict J. Fenwick, S.J., from Rev. James Fitton for $1,500. The land was originally owned by the Nipmuc, a Native American tribe found in Massachusetts and adjacent portions of Connecticut and Rhode Island.

June 21, 1843 The first cornerstone is laid, for the future College building as Fenwick Hall was first known, containing coins, medals, newspapers, a copy of the oration given by Daniel Webster four days earlier at the dedication of the Bunker Hill Monument, and pictures of President John Tyler.

Sept. 28, 1843 Rev. Thomas F. Mulledy, S.J., takes up residence as first president after returning to the United States following his censure by the Jesuits for the 1838 sale of 272 enslaved persons.

Nov. 1, 1843 First day of classes are held in Campion Hall and attended by six students (all boarders).

1843 College follows educational guidelines of the Jesuit "Ratio Studiorum" (Latin for "Plan of Study"), which standardized Jesuit education around the world. The Ratio relied on classical subjects (theology, philosophy, Latin and Greek) with additional attention to languages, history, geography, mathematics and the natural sciences.

1844 Ages of students attending the College range from seven to 31, with the average age of an entering student being 12.

1844 The Sodality of Mary, the first student organization, is founded. The Sodality offered a program of regular devotional exercises and meetings for mutual encouragement.

1849 State of Massachusetts denies the College's charter application, partly due to the practical question of whether the state needs another college (Harvard, Williams and Amherst already existed), overlaid with anti-Catholic sentiments pervasive in the region.

July 14, 1852 Fire breaks out on the third floor of Fenwick Hall, spreading across the College's main building to cause $40,000 worth of damage, the equivalent of $1.3 million today.

October 1853 The College reopens with 14 students and four Jesuit teachers in an undamaged section of Fenwick; rebuilding begins in earnest using funds raised by the Jesuits and donations. The largest donation, $2,300, was made by Patrick F. Healy, S.J. — Jesuit scholar and brother of Holy Cross' first valedictorian, James A. Healy — from the sale of their father's estate in Georgia, which included 49 enslaved persons. While their father was an Irish immigrant, their mother, Eliza, was a slave of mixed race, making Patrick and James slaves by law. They travelled north at a young age to escape the burden of slavery, eventually arriving at Holy Cross.

1854 A 400-pound copper bell, cast in 1853 by Henry N. Hooper in the copper foundry formerly owned by Paul Revere, is installed in Fenwick Tower.

1857 James A. Healy, class of 1849 and first Holy Cross valedictorian, becomes the first ordained priest — and, later, the first bishop — of African descent in the United States. At a time of pervasive racism, even in the north, Healy suppressed his racial profile as the son of a mixed race mother and therefore a slave himself. Adding to the complexity of the time and his situation, Healy was critical of abolitionists and black rights during Reconstruction.

1859 School uniforms — black coat or jacket, black vest, grey pants in winter, white pants in summer — are dropped after objections from parents who could not afford them.

1860 The population of Worcester rises from 7,500 to 25,000 over a 20-year period from 1840 due to the opening of the Blackstone Canal and the city's location at the intersection of railroad lines from Boston, Springfield and New York City.

1861 American Civil War begins; the draft poses only a minor inconvenience because many Holy Cross students are underage and ineligible to serve.

1862 Forty-eight acres of farmland adjacent to campus are purchased, including a working farm that provides food at low cost.

March 24, 1865 Charter is granted by the Commonwealth of Massachusetts; Holy Cross degrees are now conferred on graduates. Graduates had previously received Georgetown University degrees while the College was operating without a charter.

1865 Composition of the student body becomes increasingly regional following the effects of the war and the expansion of the Jesuit and Catholic educational network countrywide; just 2 percent of students are from the South, compared with 19 percent pre-war, when the largest numbers hailed from Maryland, the District of Columbia and Louisiana.

1865 A second College seal is designed, replacing the first, which was created in the 1840s. While the original seal featured the Cross of Constantine in the sky and the Greek phrase "ἐν τούτῳ νίκα," which translates to "In this sign thou shalt conquer," the new design incorporated additional elements. A hill signified the topography of the College, while a train and ships indicated the commerce of the city of Worcester. A globe, books and telescope represented the study of the liberal arts, and the cross remained in the sky. An inscription around the circle of the seal read "Collegium Sanctae Crucis S.J. - Vigornii Mass" (College of the Holy Cross, S.J. - Worcester, Mass.).

1866 Tuition, room and board costs $250, a 67 percent increase from 1861, largely a result of the 80 percent inflation experienced in the Union during the Civil War.

1868 Fenwick Hall is expanded with the addition of a west wing, built one story higher than the existing structure. The building's two iconic towers were erected on the central structure, which was raised one story to match the new addition, dwarfing the east wing.

1869 Fr. Campi adjusts the College Catalog to create divisions between the courses of the "Ratio Studiorum." He grouped Rudiments under "Preparatory Department," Second and Third Humanities under "Junior Department," and the top four years, consisting of First Humanities, Poetry, Rhetoric and Philosophy, under "Senior Classes."

1870 College begins to accept day students for a reduced tuition of $75.

1873 Students are prohibited from attending Barnum's circus in Worcester due to an outbreak of "general misbehavior."

1875 Fenwick Hall is further expanded, making the east wing proportional, and renovated to include gas lighting instead of oil lamps as gas lines from the city had reached the College.

1879 Fall harvest brings in nearly 1,000 bushels of potatoes and 105 barrels of apples, in addition to a thriving dairy herd. Jesuit lay brothers (roughly 10) keep expenses down by doing most of the manual labor in the school and farm.

1883 The College's Pakachoag Dramatic Club performs its first public production, "The Merchant of Venice," at Mechanics Hall in downtown Worcester.

1885 The College Choir refuses to sing until offered an earlier breakfast to accommodate their singing schedule at compulsory Mass. The choir strike is the first recorded instance of student challenge to College authority.

1885 Dip in enrollment (approximately 170 to 150) is attributed to the attractiveness of less-expensive alternatives, such as Boston College (a day school) and some Canadian colleges.

1891 Interest in baseball is so strong that the schedule of classes is altered so students and faculty can attend games, which draw up to 4,000 people to campus.

1893 Harvard Law School faculty votes that beginning in 1896, only persons qualified for the senior class at Harvard, or graduates of 106 approved colleges, would be admitted. No Jesuit colleges, including Holy Cross, made the list because of what Harvard deemed as a weak curriculum. At this point, Harvard had transitioned into a university of specialized professionals through the introduction of the elective course system. Because of the power Harvard had in setting admission standards for its professional programs (e.g. law and medicine), all American schools were eventually affected by their new curricular approach.

1894 The baseball season scorebook reports that of 514 Holy Cross graduates, 242 opted for the priesthood, while 92 pursued medicine, 90 business, 65 law, 18 teaching and seven journalism.

1894 Students petition to wear caps and gowns at graduation; petition is refused.

1894 A telephone is installed in Fenwick Hall, 18 years after Alexander Graham Bell's invention is patented.

1895 O’Kane Hall is completed to include a swimming pool, gymnasium, physics and chemistry laboratories, a museum, and a large meeting hall (later Fenwick Theatre) seating 800; tower is topped with a large metal cross.

1896 Caps and gowns are worn for the first time at graduation.

1897 Admission of students solely on the basis of athletics is forbidden.

1897 With Harvard setting a new standard for higher education through curricular reform, Holy Cross feels pressure to affirm the comparative value of its education by finding a compromise between the new American plan for organization and the "Ratio Studiorum." Consultors debated how to elevate standards of study in order to be recognized as a modern four-year college, making changes including an increased emphasis on non-classics courses (i.e., French, mathematics, chemistry) and admitting high school graduates to First Humanities (freshman year) rather than Poetry (sophomore year).

1899 The College holds its 50th commencement; Bishop James A. Healy, the only surviving member of the first class, is guest speaker.