The close study of the ancient languages, coupled with the broader perspectives that come from engaging with the ancient cultures, prepares students for any number of post-graduate pursuits.

Classics majors have success in a variety of fields, including education, law, medicine, diplomacy, technology, journalism, business and finance, government, the non-profit sector, and in the literary world. After graduation, some pursue advanced degrees in classics (in M.A. and Ph.D. programs), while others go on to law, medical, or business school. Several recent classics graduates have received Fulbright research grants. 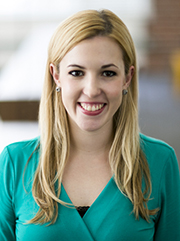 Christine Bannan ’14 conducted research on an Athenian tribute monument while studying in Athens as a junior, and then wrote a thesis on the monument during her senior year. While a student at Notre Dame Law School, Christine interned in the summer of 2015 at the Wikimedia Foundation in San Francisco and in 2016 won the Edelson PC Consumer Privacy Scholarship, a scholarship that supports law students who are passionate about consumer privacy issues. In 2017 Christine was sworn into the Massachusetts bar and is now working as the Administrative Law and Policy Fellow at the Electronic Privacy Information Center (EPIC) in Washington, DC.

"Learning how to read cases was like learning a new language, and nothing prepared me for law school more than reading complex Latin and Greek texts for four years,” Christine says. “And the research I conducted through the Manuscripts, Inscriptions, and Documents Club exposed me to fascinating issues relating to technology that inspired me to pursue a career in intellectual property and data privacy law."

While at Holy Cross Dan Earley ’12 spent a semester in Rome and wrote a thesis for the College Honors Program titled "Homer's Brain: Cognitive Connections between Audiences and Singers of Homeric Epic." Dan went on to earn an MD at the Tufts University School of Medicine.

Greyson Ford ’16 double majored in classics and policy studies and wrote a capstone on the influences of Plato and Rousseau on democratic education in the United States. He is now working as a global business analyst at First Data in New York City, while also doing work as a volunteer tax preparer for underserved communities in Harlem. 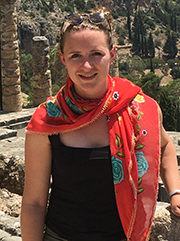 While at Holy Cross Eliza Gettel ’12 wrote a thesis on the use of archaeology for political propaganda in Greece in the 20th century. After graduation she traveled on a Fulbright Fellowship to the United Kingdom to study for a master’s in social archaeology at the University of Southampton. After earning a Ph.D. in ancient history at Harvard University, Eliza took a position in the Department of History at Villanova University.

"The engaging environment and high level of close-knit seminars in the Holy Cross classics department prepared me for the small and intense format of graduate seminars,” Eliza says. “More importantly, the openness and supportive atmosphere of the department encouraged me to think big about the ancient world and its lasting legacy in contemporary society — a skill that has proved itself incredibly useful both within scholarship and beyond."

In 2017 Miranda Hernandez '13 earned her J.D. at the Northern Illinois University College of Law and was the Class of 2017 Speaker at commencement. In 2016-17 Miranda was the Director of Policy Initiative for the National Latina/o Law Student Association. She went on to earn an M.B.A. at the Northern Illinois University College of Business (read an interview with Miranda on the NIU website here). In 2020 Miranda began work as legislative counsel in the office of U.S. Senator Tom Udall (New Mexico).

Stephanie Lindeborg ’13 went on to earn a Master’s in Latin and the classical humanities at the University of Massachusetts at Boston. She is now teaching at Boston Latin Academy, while also working as a project manager for the Homer Multitext project.

Joseph MacNeill ’16 was the 2015–16 Fenwick Scholar, writing a thesis titled "Encountering God as Logos: A Postmodern Theology.” After a year at the Theological College at the Catholic University of America in Washington, D.C., Joe is continuing formation toward the priesthood by pursuing theological studies at the Pontifical North American College in Rome. 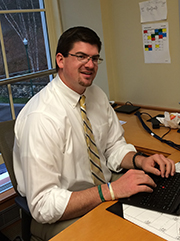 Michael McCabe ’12 played football at Holy Cross while majoring in classics, writing a capstone paper on camaraderie in Virgil’s Aeneid. After graduation Mike was signed by the Green Bay Packers and spent a year with the team. He is now teaching Latin and coaching at the Berkshire School in Sheffield, Mass.

"My experience as a student at Holy Cross directly led me towards a career in education,” he says. “The professors with whom I worked, specifically in the classics department, have made a lasting impression on me, and they educated me as a citizen as much as a student. I feel fortunate to have the same opportunity to educate young people in a boarding school environment, and it thrills me to use Latin as my medium. If I can make even half the impression on my students which my professors at Holy Cross made on me, I will view my work as very successful." 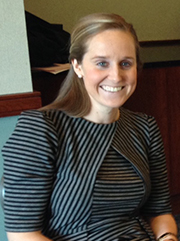 Meg Moran ’08 spent four years in the financial services area (at Lehman Brothers and Barclays) before pursuing her MBA at the Tuck School of Business at Dartmouth. She currently works in human resources strategy at Johnson & Johnson. In a visit to Holy Cross in 2016, Meg noted that her ability to read things closely has been a distinguishing factor for her since the beginning of her career.

“In my first internship I became known as the person who could read and edit documents with a critical eye,” she said. “Little details — little mistakes — matter, and that was something instilled in me during my Greek and Latin courses.”

Matt Mullaney ’11 is a senior manager at PricewaterhouseCoopers. Matt double-majored in classics and accounting at Holy Cross, and went on to earn a master’s in tax at the University of Notre Dame.

Of the connection between his majors, Matt says, “I was taught in my tax class that one of the best answers to any particular tax question is ‘it depends,’ simply because, based on the context and particular aspects of each issue that arises, the tax treatment can be different. The same can be said for more complex translations of texts. Translating is all about the ability to find patterns and analyze structures. At the end of the day, more often than not there is not one right or ‘correct’ translation, so it is up to you to provide the best possible interpretation based on the information at hand. Essentially, then, the classics major paired well with the accounting major because it improved my critical thinking and problem solving skills, not to mention my ability to conduct research.”

Lindsey Nemshick ’15 completed the health professions advising program along with the classics major, writing a senior thesis titled "The Power of the Female Voice in Homer's Odyssey.” She is currently enrolled at the University of Pennsylvania School of Dental Medicine.

“The time I spent studying the ancient world and its languages at Holy Cross gifted me with such an appreciation for the human experience, and I bring a different set of skills than most to my current work in subjects such as anatomy, physiology, and pathology,” she says. “My major in classics also taught me how to think more deeply about human life, its significance, and its purpose. The study of the classics still informs not only my intellect on a daily basis, but it also greatly informs my life and how I view myself as a future medical professional for my patients and for others I will serve.” 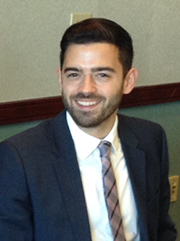 After graduation Ryan O’Malley ’09 worked in real estate and project management before being elected to the Malden, Mass., City Council in 2015. His public service in Malden includes infrastructure planning, and he draws on the semester he spent in Rome when thinking about lasting solutions.

“Those of us who studied ancient Rome and Greece are better prepared to look at things from a longer perspective,” said Ryan during a visit to Holy Cross in 2016. “We think not in quarters or years, but in decades, centuries, and millennia.”

Chris Puntasecca '19 majored in Classics and Chemistry at Holy Cross and is now a student at Stanford University Medical School in the 2019 cohort of Knight-Hennessy Scholars. 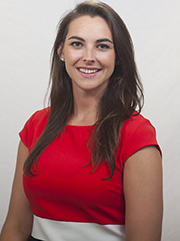 Brigit Quirk ’13 began work after graduation as an underwriter for the Hanover Insurance Group in Portland, Maine. While at Holy Cross she completed a thesis titled “Warring with Images: The Relationship between the Flavian Building Program and War.”

Of the connections between her current work and her course of study at Holy Cross, Brigit writes, “By studying the classics, I learned how to effectively form an argument, to pay close attention to detail, and to think logically. I have been able to apply these skills to specific aspects of my work, including reviewing insurance contracts, evaluating risk, and communicating with clients.”

Christine Roughan ’14 is a Ph.D. candidate at the Institute for the Study of the Ancient World at New York University. After graduation she was a Fulbright Scholar at Leipzig University in Germany, where she investigated the possibilities for digitally representing every manuscript and print edition of the ancient Greek mathematician Euclid’s treatise “Elements.” She is continuing similar work now at NYU.

On a visit back to Holy Cross in 2015, Christine said of her time here: “The classics department at Holy Cross always encouraged exploration. In my studies I pursued not just classics but also physics — a strange combination, but one that led me to discover my interest in ancient science, an area in which I continue to work today.”

A number of graduates of the Department of Classics have gone on to careers of national prominence in medicine. Anthony Fauci ’62 has been director of the National Institute of Allergy and Infectious Diseases since 1984. As a researcher, he has made groundbreaking scientific observations about the regulation of the human immune response and developed effective therapies for formerly fatal diseases. He has also contributed significantly to the scientific understanding and treatment of HIV/AIDS. 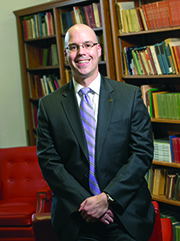 Steven Stack ’94 is an emergency room physician residing in Lexington, Kentucky. In 2015–16 he served as the 170th president of the American Medical Association. Read a profile of Steven in Holy Cross Magazine.

Holy Cross classics majors have had great success at winning Fulbright grants to teach and conduct research around the world. The Fulbright Program, sponsored by the U.S. Department of State, is widely recognized as the most prestigious international exchange program in the world. The highly competitive grants are awarded on the basis of academic merit and professional promise.

In 2018, the Department of Classics and the Health Professions Advising program cosponsored a panel titled "What Is Your Purpose in a Health Professions Career? Ancient and Modern Ideas." The panel included Christopher Lops, M.D. '03, Erin Teeple, M.D., and Calloway Scott, Ph.D., and was moderated by Tom Martin, professor of classics. Watch the video recording »