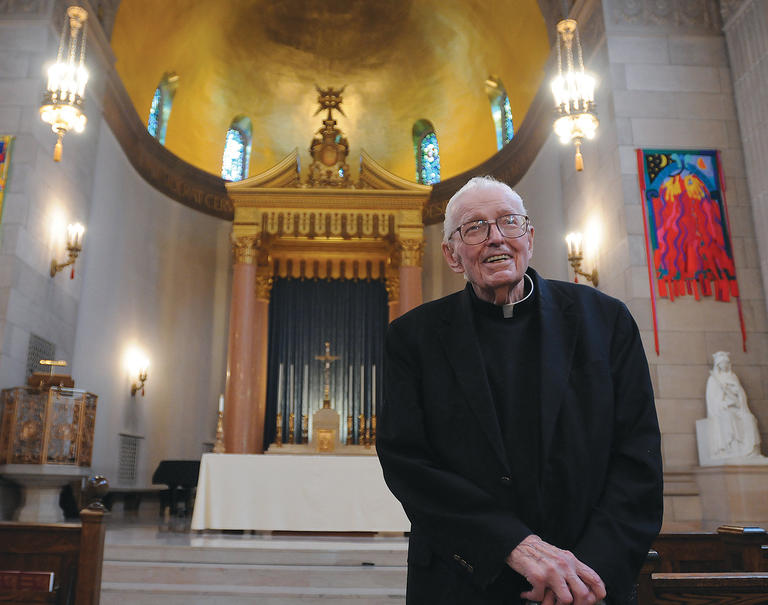 During his tenure as the College’s 29th president from 1970 to 1994, Rev. John E. Brooks, S.J. (1923-2012), presided over a period of enormous change at Holy Cross, New England’s oldest Catholic college. In addition to moving the College to coeducation and recruiting a significantly more diverse student body, he helped strengthen Holy Cross financially, energize the alumni network, and build the College into one of the country’s top liberal arts institutions. At the time of his death, Fr. Brooks was actively working, serving as President Emeritus and Loyola Professor of the Humanities in the Religious Studies Department. He continued to teach a seminar in Contemporary Christology, remained engaged in fundraising and the business of the College, and had close ties with legions of alumni. In 2011 and 2012, his leadership at Holy Cross received widespread attention after the publication of the book “Fraternity,” chronicling the bold steps he took in the late 1960s and early 1970s to recruit African-American students to the College.

Born July 13, 1923 in Dorchester, Mass., to the late John E. and Mildred (McCoy) Brooks, Fr. Brooks grew up the oldest of four children in the West Roxbury section of Boston. He graduated from the Boston Latin School and entered Holy Cross as a freshman in 1942. Fr. Brooks volunteered for service in the U.S. Army in 1943, and trained in the Signal Corps. He served in World War II campaigns in Northern France, the Rhineland, Ardennes and Central Europe until his discharge from the Army in January 1946. He graduated from Holy Cross in 1949 with a bachelor’s degree and major concentration in physics. After pursuing graduate studies in geophysics at Pennsylvania State University, he entered the New England Province of the Society of Jesus in 1950. He earned an M.A. in philosophy in 1954 from Boston College, and immediately returned to Holy Cross as an instructor of mathematics and physics. In 1956, he began his study of theology at Weston College and was ordained a priest on June 13, 1959 by the late Richard Cardinal Cushing of Boston. Having completed a year of ascetical theology study at the Jesuit Tertianship in Pomfret, Conn., he also earned an M.S. in geophysics from Boston College. Assigned to pursue graduate studies in theology, in 1963 he earned a Doctor of Sacred Theology degree from the Gregorian University in Rome, during the early years of the Second Vatican Council.

He returned to Holy Cross as a faculty member in the Religious Studies Department in 1963, and was named department chair in 1964.

Fr. Brooks made his final vows as a Jesuit in August 1966.

Immediately following the death of Martin Luther King, Jr., in April of 1968, Fr. Brooks traveled to high schools up and down the East Coast to recruit African-American high school students to attend Holy Cross. Among the dozens of students he brought to Holy Cross were Clarence Thomas ’71, the future Supreme Court justice; Edward P. Jones ’72, who would go on to win a Pulitzer Prize for literature; Theodore Wells ’72, who would become one of the nation’s most successful defense attorneys; Stanley Grayson ’72, future New York City deputy mayor who would break the color bar on Wall Street; and Eddie Jenkins ’72, who would play for the Miami Dolphins during their 1972 perfect season.

Also in 1968, Fr. Brooks was appointed Academic Vice President and Dean of the College, and in 1970, he succeeded the Rev. Raymond J. Swords, S.J., whose 10-year presidency was the longest at the College at the time. Fr. Brooks was the first president elected by a combination Jesuit-lay Board of Trustees.

In 1970, he announced that the previously all-male Holy Cross was to admit women, and in the fall of 1972 approximately 300 women entered Holy Cross.

Throughout his tenure as president, Fr. Brooks was an indefatigable fundraiser, annually traveling across the country, delivering talks to dozens of regional alumni clubs and meeting with supporters and donors. In partnership with his friend and colleague, the late Francis X. Miller, S.J. ’46, vice president of development, they strengthened the famous Holy Cross alumni network and built a lasting foundation of loyalty among Holy Cross graduates.

In 1986, with presidents from Bucknell, Colgate, Lafayette, and Lehigh universities, he helped found what has become the Patriot League, originally begun as a Division I football league, now expanded to be inclusive of all sports and to this day recognized for its promotion of high academic achievement among participating student-athletes. He was inducted into the Institute for International Sport’s Scholar-Athlete Hall of Fame in 2003.

Fr. Brooks was also instrumental in expanding the cultural offerings at Holy Cross, particularly art and music. He founded the College’s first art gallery in 1983, and today the campus and the Iris and B. Gerald Cantor Art Gallery are known for extensive collections as well as an acclaimed exhibition program. Fr. Brooks also commissioned the College’s award-winning Taylor and Boody Organ, designed in the tradition of 16th and 17th century Dutch and north German organs, which was completed and dedicated in 1985. The Rev. John E. Brooks, S.J. Concert Hall was named for him, and the full-tuition Brooks Music Scholarship was established in his honor.

Fr. Brooks was president in 1990 when his friend and Holy Cross trustee, the late Jacob Hiatt, along with his daughter and son-in-law, Myra and Robert Kraft, made a major gift to Holy Cross and Brandeis University to endow two professorships in comparative religion: the Kraft-Hiatt Chair in Judaic Studies at Holy Cross and the Kraft-Hiatt Chair in Christian Studies at Brandeis University. To this day, the Kraft-Hiatt fund supports campus and community-wide educational initiatives that foster understanding of Judaism and Jewish culture, and dialogue between Jews and Christians.

Fr. Brooks received an honorary Doctor of Letters degree from Holy Cross in 1994. He also received honorary degrees from St. Ambrose College, Worcester Polytechnic Institute, St. Anselm College, Assumption College, Anna Maria College, and the University of New England. He served on the boards of Spring Hill College, Canisius College, St. Peter’s College, and Anna Maria College. He was also a trustee of The Gregorian University Foundation and St. Sebastian’s School, among many other educational, cultural, and research organizations he helped lead.