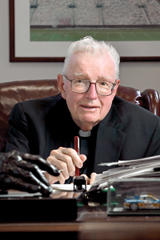 Rev. John E. Brooks, S.J., ’49, elected president of Holy Cross in 1970, served in this capacity until his retirement in 1994. Born in Dorchester, Mass., in 1923, he received a bachelor of science degree from the College of the Holy Cross in 1949 and joined the Society of Jesus in 1950. A member of the faculty of the theology department at Holy Cross, he also served as Vice President and Dean of the College. Among Fr. Brooks' achievements as College president are the transition to coeducation, the growth in the College's endowment to $140 million, 23 consecutive years of balanced budgets, and playing a key role in establishing Holy Cross as a vibrant center for the arts with the founding of the Iris and B. Gerald Cantor Art Gallery and a concert hall that bears his name. He remained at the College as president emeritus and Loyola professor of the humanities, and continued to teach a seminar in Christology, until his passing on July 2, 2012.