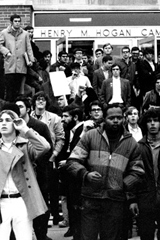 By late 1969, antiwar protests had become an unavoidable part of campus life. While some students took an active role in the ROTC and supported American efforts to defeat North Vietnam's communist forces, a growing number were angry and desperate for the United States to pull out. Nationwide, students were looking for any opportunity to make themselves heard on the war or on any matter of social injustice. Holy Cross was ripe terrain for anyone looking to protest the war. The College had a long- standing ROTC presence and was a popular recruiting spot for the military as well as companies with military contracts. The steady stream of recruitment visits gave antiwar protesters easy targets for demonstrations. In the fall of 1969, the Holy Cross chapter of Students for a Democratic Society [SDS] staged a "talkathon" when Marine recruiters came to campus. They chanted so loudly that the officers were unable to interview potential recruits. While tensions were high, most of the demonstrations passed without incident. During a march to protest an insurer's involvement in a controversial urban renewal project, police met the protesters at the company's headquarters in full riot gear with dogs and reinforcements. The police sent the students back to campus and they left without any real arguments. None of them wanted to go to jail or get into real trouble. Fr. Brooks firmly believed in the students' right to protest. Occasionally he even joined them. At one October event, a large group of students gathered on the library steps to call for a moratorium on U.S. involvement in Vietnam. Fr. Brooks gave a speech in support of the students' call, and then he and Swords [College President Rev. Raymond J. Swords, S.J.] held an impromptu mass for everyone who showed up. Minor campus confrontations continued throughout the fall of 1969. The SDS morphed into the Revolutionary Students Union (RSU), and the new group devoted much of its effort to going after the ROTC.

On December 1, the faculty senate took a vote to state that, among other things, "advocates of no cause will be permitted to deny freedom to anyone with whom they may disagree." Moreover, when it came to career recruiting, the campus "must remain open to the representatives of business firms and agencies of government which enjoy a legitimate place in American society." The RSU vowed to continue with its protests in spite of the vote. Next up was a General Electric Company recruitment visit on December 10. Protesters saw that as an opportunity to log yet another victory. The RSU announced that it planned to interrupt the GE visit in support of an ongoing strike by GE workers and to protest the company's role as a major defense contractor that manufactured products like the Minigun, a helicopter-mounted weapon that could fire up to four thousand rounds per minute. The RSU organizers approached Ted Wells and Art Martin to see if the Black Student Union wanted to join the protest, since GE had been accused of discriminating against African Americans. Wells was skeptical; he argued that the BSU should save its energy for battles that were more directly related to black issues, but he agreed to take the matter to a vote. The black students met on December 9 and, after some debate, agreed that the union should stay neutral. Anyone who wanted to join the protest would have to go on his own. The next morning, two GE recruiters arrived on campus. Holy Cross officials met them in the parking lot and took them straight to Room 320 of Hogan Hall. Within half an hour, a few dozen students had gathered to interrupt the job interviews. When the first senior tried to enter the room for an interview, he was turned away by a chain of interlocked arms. The same thing happened for two other students, who left amid a chorus of voices chanting "Workers, yes! GE, no!" Don McClain, the dean of students, was livid. He stood before the crowd and vowed to take the matter to the College Judicial Board for further action if the protesters didn't disband. When the students ignored him, McClain, frustrated, asked the recruiters to leave.

Continue reading the excerpt on the Holy Cross Magazine website

From the book, "Fraternity," by Diane Brady, which was published in January 2012. Copyright © 2011 by Diane Brady. Reprinted by arrangement with Spiegel & Grau, an imprint of The Random House Publishing Group, a division of Random House, Inc. All rights reserved. ("Fraternity" is available through amazon.com.)