Rector of the Jesuit Community 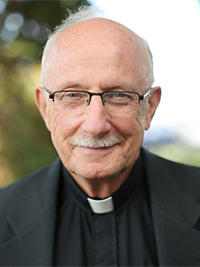 Jim Stormes was raised in Randolph, MA and attended Holy Cross from 1965-1967. He then joined the Jesuits and was sent to Guatemala as a novice. That experience sparked his lifelong interest in economic development and international ministry in general. He studied in St. Louis, Missouri, Austin, Texas and the University of Massachusetts Amherst where he earned a Ph.D. in Economics. He worked in Central America and Chile as a scholastic, taught economics and Catholic Social Thought at St. Joseph’s University and the University of San Francisco, and most recently taught at Hekima University College in Nairobi Kenya, and its Institute of Peace and International Relations. Father Stormes is now Rector of the Jesuit Community, building on his experience in Province and National Jesuit Administration, including being Provincial of the Maryland Province 1996-2002. His toughest job was as International Assistant when his mandate was to visit Jesuits of the Province working around the world and take them out to dinner. 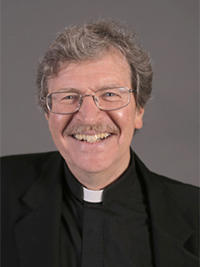 William A. Clark, S.J., is an Associate Professor in the Department of Religious Studies specializing in systematic theology, particularly ecclesiology, with a special interest in parish life and issues affecting local church communities. He earned degrees at Williams College, Loyola University of Chicago, and his doctorate at the Weston Jesuit School of Theology in Cambridge, Massachusetts. He began teaching at Holy Cross in September 2001.

Fr. Clark offers various courses on Catholicism, local church communities, and Christian prayer.  He is the author of A Voice of Their Own: The Authority of the Local Parish (Liturgical Press, 2005), and various articles, book chapters, dictionary entries, and reviews. He has also presented many lectures and retreats for parishes and other church groups in New England, around the country, and abroad.  In addition to his academic work, Fr. Clark has extensive experience in parish pastoral work, retreat direction, and music ministry.  He served as pastor of St. Thomas Aquinas Church in Kingston, Jamaica, for several years.  A CD of his original Christian music, performed with a small group of musicians named "Spirit Call," is available from him, for the benefit of poor families in Jamaica. 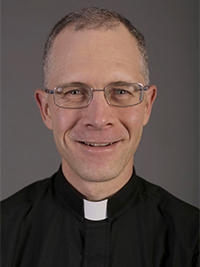 Father Gavin earned his B.A. from Boston College, his M.A. from Fordham University, and his M.Div. from the Jesuit School of Theology in Berkley. He received his Sacred Theology Doctorate in Rome and was a lecturer at the Pontifical Biblical Institute and the Gregorian University for three years. Fr. Gavin entered the Society of Jesus in 1991 and was ordained as a Catholic priest in 2002. He is the author of 'They are like the angels in the heavens': Angelology and Anthropology in the Thought of Maximus the Confessor (Augustinianum, 2009) and A Celtic Christology: The Incarnation According to John Scottus Eriugena (Cascade, 2014). 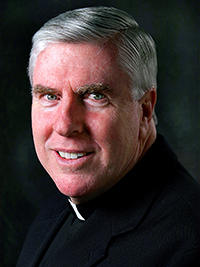 James M. Hayes, S.J. (Holy Cross 1972) served as rector of the Jesuit Community from 15 August 2004 until 31 July 2010.  In addition he chaired the Mission and Identity Community and worked part time in campus ministry.  After a brief sabbatical, Father Hayes returned full time in campus ministry, continues as a member of the Mission and Identity Committee, and served as chaplain for the Class of 2015.  From 1999-2004 Father Hayes served as vocation director and assistant for International ministries for the New England Province of the Society of Jesus.  In addition, Father Hayes was superior of Ignatius House, the Provincial Residence in Boston. For four years, Father Hayes ministered on the island of Jamaica both as a teacher at Saint George’s College, and as a parochial vicar at Saint Thomas Aquinas University parish.  From 1987-1992, Father Hayes served as a campus minister at Fairfield University.  Father holds a bachelor degree from the College of the Holy Cross and master's degrees from Gonzaga University in Spokane, WA; Regis College University of Toronto; Jesuit School of Theology at Berkeley and Loyola College in Maryland. He was ordained at St. Joseph Chapel at College of the Holy Cross in June of 1985.

Father Hayes grew up in Grosse Pointe Farms, Michigan the son of the late Neil B. Hayes (Holy Cross 1932) and the late Mary Elizabeth Hayes. Father Hayes' older brother, Neil, died in Vietnam in 1970. He has three younger brothers, six nephews (including Colin Hayes HC ’12) and two nieces, one grandniece and one grandnephew. 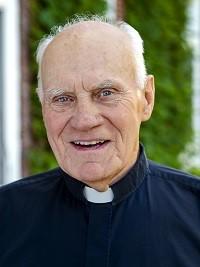 A native of West New York, NJ Father Markey attended St. Peter's Prep and the College of the Holy Cross. He completed his graduate work in Education at Fordham University.  Father Markey entered the Jesuits in July, 1953.  He did regency teaching and coaching at the Ateneo de Zamboanga, Philippines 1957-1960.  After Ordination to the Priesthood taught theology at the Ateneo de Manila 1966-1970. 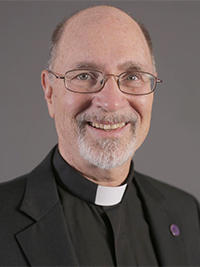 Currently serving as Chaplain, Director of Admissions, and Director of Jesuit Mission and Identity at Nativity School of Worcester.

Past assignments include:
Regional Superior of Jamaica
President and Chairman of the Board of St. George’s College, Kingston, Jamaica
Director of Mission and Identity: Cheverus High School and Fairfield University (co-facilitator)
Spiritual Direction and directing the Spiritual Exercises
Director of Spirituality and Pastoral Ministries with the Jesuit Conference
Hospice Chaplaincy
L’Arche Community (Daybreak) Chaplain
Teacher/Educator 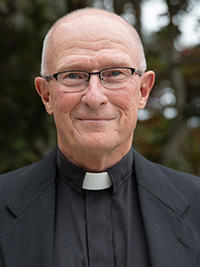 Fr. Muccino graduated from the College of the Holy Cross in 1974 following which he attended Loyola University Chicago-Stritch School of Medicine where he received his M.D. degree in 1977. He completed residency training in Internal Medicine at St. Francis Hospital in Hartford, CT. In addition to being a board certified Internist, Fr. Muccino is also board certified in Emergency Medicine, which he practiced at York Hospital, in York, Pa until he joined the Society of Jesus in 1988, entering the Jesuit Novitiate at Wernersville, PA (Maryland Province).

He obtained his M.Div from Weston Jesuit School of Theology and was ordained to the priesthood in 1996. Following ordination he has served as a clinician, educator, and administrator at the Medical Centers at Georgetown University and Loyola University Chicago. He most recently served as Associate Provost for Educational Resources at Loyola University Chicago’s Health Sciences Division.  In addition to working in the Pre Health Professions Advising Program at Holy Cross, he serves as an Educational Specialist at UMass Medical School in Worcester, MA. 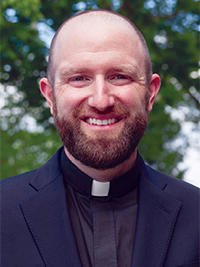 Fr. Timothy O'Brien, S.J., hails from King of Prussia, Pennsylvania. A 2006 alumnus of Holy Cross, Fr. O'Brien entered the Jesuits in 2008. After entering the Society, he pursued graduate studies in philosophy, theology, and history. A former faculty member at Loyola University Maryland, his academic research focuses on the spiritual and religious culture of early modern Europe, especially the Iberian Peninsula. Fr. O'Brien was ordained a priest in 2018, and has served as assistant pastor at Holy Trinity Catholic Church in Washington, D.C. In 2021, he returned to the College as Director of Mission Initiatives in the Office of Mission. 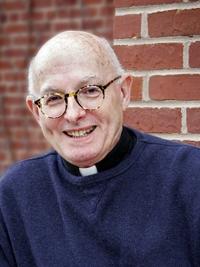 After six years at St. Thomas Seminary in Bloomfield, Connecticut, Father Reiser entered the Society of Jesus and later attended Boston College. He majored in philosophy and then taught in the Philosophy Department at Holy Cross for three years. He completed his theology studies at the Weston Jesuit School of Theology in Cambridge and was ordained in 1972. He did doctoral studies at Vanderbilt University. Father Reiser has been teaching theology at Holy Cross since 1978. Some of his writings include To Hear God’s Word, Listen to the World; Seeking God in All Things: Theology and Spiritual Direction; and Jesus in Solidarity with His People: A Theologian Looks at Mark. A collection of his articles written for Vocations & Prayer Magazine (Getting to Know the God We Believe in: Some Lessons from Religious Life) can be found at crossworks.holycross.edu. He has traveled many times to Bolivia and is involved pastorally with the Hispanic community in Worcester. 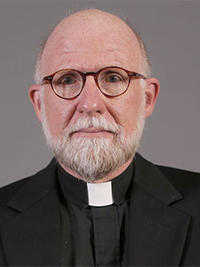 Rev. William E. Stempsey, S.J., is professor of philosophy at Holy Cross; he also works in medical ethics as adjunct associate professor at the University of Massachusetts Medical School. He received a Ph.D. in philosophy from Georgetown University in 1996, working under Dr. Robert Veatch and concentrating in bioethics and the philosophy of medicine.

Father Stempsey also holds the degrees of Master of Divinity and Master of Sacred Theology from the Jesuit School of Theology at Berkeley, and the Master of Arts in health care ethics from Loyola University Chicago. Before entering the Jesuit order, he received the Bachelor of Science degree from Boston College and the Doctor of Medicine degree from State University of New York at Buffalo School of Medicine. He served as a resident in pathology at Boston City Hospital, University Hospital, and The Children's Hospital, all in Boston.

He is the author of Disease and Diagnosis: Value-Dependent Realism (Kluwer, 1999) and editor of Elisha Bartlett's Philosophy of Medicine (Springer, 2005). 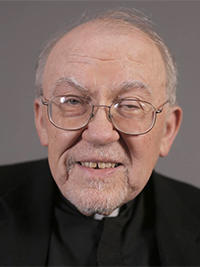 Father Vodoklys is a native of Winthrop, MA and attended Boston College High School.  He received his degree in Classics here at Holy Cross in 1972.

He studied at Harvard University for a master’s and Ph.D. in Classical Philosophy.  He received the Fenwick Scholar Award from the College in 1971-1972. Father Vodoklys, served as the treasurer of the Holy Cross Jesuit Community from 1993 to 2014, is a Senior Lecturer in Classics who specializes in Greek drama, Roman epic poetry, Patristic Latin and Greek (St. Augustine and St. John Chrysostom), New Testament Greek, Latin Composition and the history of the Classical Tradition with particular interest in the use Latin mottoes. His publications include Blame Expression in the Epic Tradition (Garland Press, 1992 ), Lessons in Stone : Latin Inscriptions of Holy Cross, (1996), and the Enciclopedia de espaňoles emblemas ilustrados, coauthored with Antonio Bernat Vistarini and John Cull (Akal 1999) and numerous translations used in musical texts including CD's by Tapestry: The Fourth River: The Millenium Revealed (1999) and ArchAngeli , and the libretto for the Jesuit proto-opera  Apotheosis sive Consecratio Sanctorum Ignatii and  Francisci Xaverii (1991)

Fr Vodoklys has also been the co-director of the Vocation Discernment Group for young men considering priestly and religious vocations sponsored by the Jesuit community and the Chaplains Office since its inception in 1999-2000.  He also presides at the sacrament of reconciliation and a daily evening liturgy on campus and does spiritual direction with students and faculty.