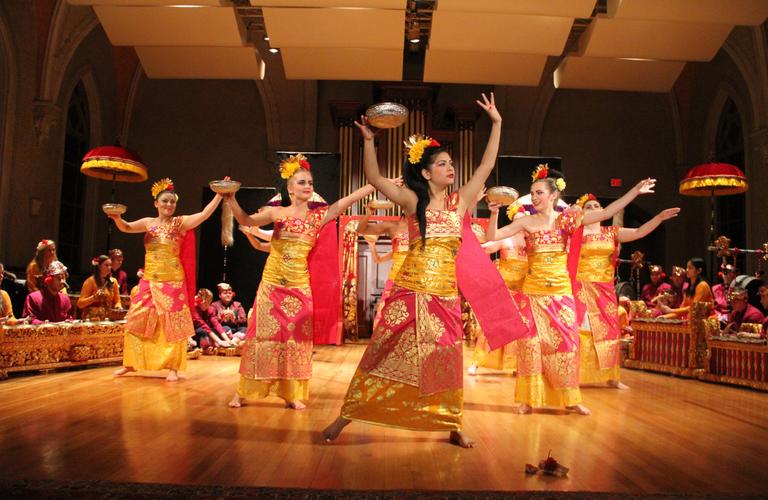 Holy Cross is one of just a handful of colleges in the country that has a Balinese gamelan orchestra. Through courses in gamelan and dance, students can experience the rich traditions of Balinese culture. Gamelan Gita Sari performs twice a year in Brooks Concert Hall and their concerts are free and open to the public.

Introducing students to Balinese music and dance has been a highlight of the arts at Holy Cross since 1997, when Fulbright scholar-in-residence I Nyoman Cerita brought gamelan music to the campus with a borrowed orchestra.

The College’s Gong Kebyar gamelan was built in Indonesia by master Balinese craftsman Pande Made Sukerta in 1998 and named Gamelan Gita Sari at a blessing ceremony on campus in July 1999. "Gita Sari" means "the essence of song" in Bahasa Indonesian, the native language of the country, and some of the world’s foremost Balinese musicians and dancers have taught at the College.

I Nyoman Catra will be returning to Holy Cross in the fall of 2016 as a Visiting Fellow of Balinese Performing Arts. One of Bali's master artists of traditional dance/theater, I Nyoman Catra specializes in the Kecak monkey dance and masked temple performances known as Topeng, whose clown characters bear a strong resemblance to commedia dell'arte. In common with his predecessors at Holy Cross, he is internationally renowned and has taught at the Institut Seni Indonesia (The National Institute of the Arts is Denpasar).

Kecak, also called the Monkey Chant, is performed by an all-male ensemble with dancers performing an episode from the Hindu epic in the center of the chanters. Usually, each chanter holds one pattern against the voice of the leader. In this demonstration, Holy Cross students had to master nine different patterns against the vocal cues of Pak Catra, Visiting Fellow in Balinese music, theatre and dance.

I Nyoman Windha, one of the leading musicians and contemporary composers of Balinese gamelan music, and his wife I Gusti Agung Warsiki preceded I Nyoman Catra. He has composed dozens of compositions, primarily in kebyar style, many of which have been incorporated into the standard repertoire of Balinese performing groups and won awards at Bali's annual gamelan competition.

I Made Bandem, a renowned scholar, is known for his many articles and books concerning music, dance, and art in general. As an artist he performed throughout the world. In 1994 Bandem, received an International Music Council Award from UNESCO for his efforts in the preservation and development of art in Bali, and in 1995 he received the Dharma Kusuma, the highest honor the Government of Bali can bestow. He and his wife Suasti Bandem were at Holy Cross for eight years. Together with Professor Lynn Kremer, they developed Shackled Spirits, a production that traveled to the Bali Arts Festival in 2013.

I Wayan Dibia, descended from a family of artists, began studying classical Balinese dance, music, and drama with different masters on the island at the age of eight. He has been experimenting with various elements of traditional Balinese performing arts to create new works for contemporary audiences since 1970. His compositions have been featured at important events and art festivals in Indonesia and overseas.

Desak Made Suarti Laksmi, the Henry R Luce Professor of Balinese, Music, Theatre and Dance, at Holy Cross is a dancer, musician, and award-winning composer. Her international appearances include events in Italy, United Kingdom, Brazil, and the United States. With Lynn Kremer, she wrote and directed Mimpi, which toured to the Bali Arts Festival in 2009.