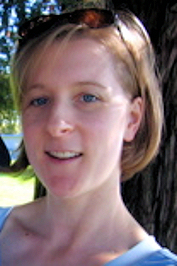 I grew up in a small coastal town in Rhode Island, blissfully unaware of the limits of my monolingualism until my senior year of high school when I left the United States to study abroad in another small town called Yecla, in the southeastern province of Murcia, Spain. The experience was the most pivotal ten months of my life... first came the intense homesickness, cultural shock, loneliness, and linguistic roadblocks; then slowly, through the daily grind of listening and trying to communicate in Spanish, spending time with my patient host family, and leaning into my curiosity and confusion, I found myself with an entirely new perspective about cultural differences and a deeper appreciation for the common ground we share. In the years since my transformative experience in Yecla, I returned to Spain to study in Toledo, and I have spent time in different parts of Latin America (México, Argentina, Uruguay, Chile, Colombia, and Perú).

Before arriving at Holy Cross, I worked in the study abroad office and special collections department at the University of Notre Dame, I applied to a doctoral program in Philosophy in Colorado, I taught Spanish at a small private college in Southern California, I tutored high school students, and I earned my Ph.D. in the Spanish & Portuguese Department of the University of California, Irvine. Inspired by the central image in Jorge Luis Borges' famous short story "El jardín de senderos que se bifurcan", I like to imagine that while my career has had many forking paths, it has always been inextricably linked to my love of Latin American literature and guided by my passion for better understanding the complex realities of the Spanish-speaking world.

My research and teaching interests are focused on three intersecting and interdisciplinary areas: Latin American Film Studies, Southern Cone Memory Studies, and experiential pedagogy in the Spanish-language curriculum. As a publicly engaged scholar, I am committed to the collaborative creation and democratic distribution of resources through open-access Digital Humanities initiatives. As a teacher, I strive to foment my students' engagement with the Spanish-speaking world through film, literature, visual arts, history, politics and collaborations with our local Latinx communities. And while the forking paths are endless, I am excited to see where your journey takes you!

“‘My Camera Is Not a Weapon’: Indigenous Erasure in Lucía Puenzo’s Wakolda.” Out from the Shadows: The Indigenous Presence in Twenty-First-Century Latin American Film, special issue of Diálogo, vol. 23, no. 1, Spring 2020, pp. 113-125.

The Prado Museum Expansion: The Diverse Art of Latin America. Reacting to the Past, Level 3 game in development, February 2019, http://reactingconsortiumlibrary.org/prado.