Students see German Studies come to life beyond the classroom through regular cocurricular programming. Study abroad, which offers the best opportunity to learn the language and experience the culture, is also available.

The National German Honor Society, Delta Phi Alpha, seeks to recognize excellence in the study of German and to provide an incentive for higher scholarship. The society aims to promote the study of the German language, literature, and civilization and endeavors to emphasize those aspects of German life and culture which are of universal value and which contribute to man's eternal search for peace and truth.

To qualify for membership, a student must have:

In May at our annual Maifest (a traditional German celebration of the arrival of spring), all qualified students are inducted into the National German Honor Society, Delta Phi Alpha. 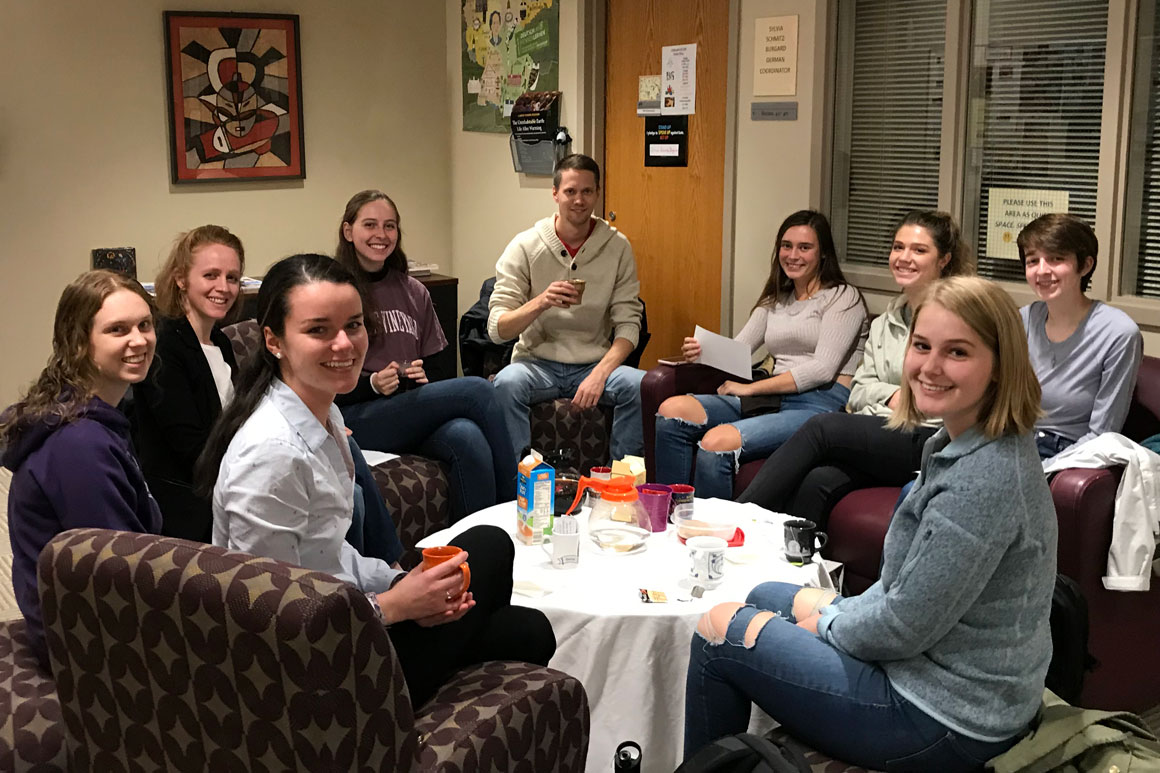 Students studying German are encouraged to augment their studies by studying abroad in Germany during their third year at Holy Cross. The fully-immersive program, which enrolls students at the University of Bamberg, allows students to perfect their German and experience German culture first-hand.

Students who study in Bamberg during their junior year major not only in German, but also in another field, especially international studies. Please discuss your options with your major advisor beforehand to ensure proper transfer of credits. All students must have completed at least Intermediate German or its equivalent prior to beginning their studies in Germany. In addition, all students enroll in an intensive language course in Bamberg before they begin their studies.

"Deutsch als Fremdsprache" (German as a foreign language) courses will offer choices, especially for the first semester. Over the course of the year at the University of Bamberg, you will accumulate 40 to 45 European Credit Transfers.

In the past, students have enrolled in some of the following courses:

The University of Bamberg also offers a number of courses in English, including:

From the 10th century onwards, Bamberg became an important link with the Slav peoples, especially those of Poland and Pomerania. During its period of greatest prosperity, from the 12th century onwards, the architecture of Bamberg strongly influenced northern Germany and Hungary. In the late 18th century it was the center of the Enlightenment in southern Germany, with eminent philosophers and writers such as Hegel and Hoffmann living there.

Get detailed information about studying at the University of Bamberg (PPT).

The Goethe Institute offers courses in the summer. The four-week courses meet twice a week and can be taken in lieu of GERM 201/2, one of which counts towards the German Studies major or minor.

The Summer Internship Program in Germany, sponsored by the American Association of Teachers of German (AATG) provides an excellent opportunity for students and recent graduates to gain international work experience in Germany, improve their German language skills and experience German culture firsthand.

The DAAD German Academic Exchange Service offers scholarships to students and graduates to spend their summer in Germany improving their knowledge of German and their cultural knowledge of the country. Sophomores or upper-level students who have completed at least GERM 101/2 can apply.