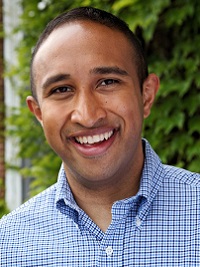 Dominic Machado graduated from Dartmouth College with an A.B. in Classics and Economics in 2009 before earning his PhD in Ancient History from Brown University in 2017. He joined the Holy Cross Classics Department in Fall 2018, after spending a year at Wake Forest University in North Carolina. Along with Neel Smith, he is a co-director of the Lingua Latina Legenda (L3) project, funded by Holy Cross' Scholarship in Action Grant, which aims to revamp Holy Cross' introductory Latin program in order to better prepare students to engage with a historical language and culture and the ways in which this language and culture shapes structures of power today.

Dominic is an ancient historian who studies the perceptions and realities of non-elite group behavior (collective action, dissent, and resistance) in the Roman world. To this end, he is currently working on a monograph on the development of "communities" within the armies of the third and second centuries BCE and the impact these groups had on the military, political, and cultural systems of the Mediterranean world. He is also interested in the role that Classics plays in the modern world and has published papers on topics on questions of diversity and inclusion in publication practices and the reception of antiquity in video games.

He believes that it is important to promote diversity and inclusion in the study of Classics, a field that has long been a bastion of privilege and elitism. To that end, he currently serves on the Committee on Diversity and Inclusion in the Profession for the Society for Classical Studies, the steering committee for the Mountaintop Coalition, and on the Working Group on Diversity for the Association of Ancient Historians.