My research focuses on the interaction of very slowly moving atoms with magnetic surfaces and with light waves. Slow atoms are interesting because they can exhibit what is called the 'wave nature' of matter. In the early 20th century, the French physicist Louis DeBroglie proposed that small pieces of physical matter, such as electrons, have an essential wave-like character that leads to some very curious properties. For example, a wave can spread out in space and different parts of a wave can interact with one another, leading to 'self-interactions' of objects, which in the case of electrons nicely explained the observed unusual behavior of electrons in atoms. Indeed, it was discovered that this wave-like character of electrons gives rise to the different chemical natures of the various atomic elements; this was one of the early triumphs of what became known as quantum theory. 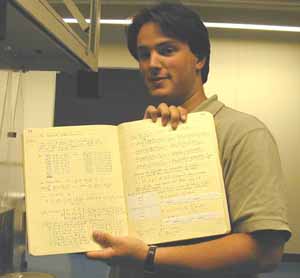 For objects larger than electrons (e.g., grains of sand, baseballs, even people), this 'wave nature' is not ordinarily seen because the size of the waves grows smaller as the mass of the object grows larger. Even for tiny atoms the wave nature is not usually apparent because the 'characteristic size of the wave' associated with the atom (called the wavelength) is much smaller than the size of the atom itself (as measured from the nucleus of the atom to the orbiting electrons). However, DeBroglie also predicted that the length of the waves of an object grows as its velocity gets smaller. Thus very slow atoms have longer wavelengths, and the curious behavior this gives rise to can be more readily explored. The field of study of atom waves is called 'Atom Optics' in analogy with ordinary Optics that deals with the uses and properties of light waves.
While producing slow atoms may not sound like a daunting task, it turns out to be challenging because they have such a tiny amount of mass. According to Newton's laws, even a modest force applied to a tiny mass results in a large acceleration, and consequently high speeds. For example, even the energy picked up from touching a room-temperature surface gives a single hydrogen atom a velocity of over 5000 mph!

A collection of slow-moving atoms can be considered as a very cold gas, and production of these from faster, hotter atoms is referred to as atom-cooling. The Nobel prize for physics in 1997 was awarded for work using lasers to cool atoms to extremely low temperatures, a few millionths of a degree above absolute zero. These travel at speeds slower than 1 centimeter per second, or about ¼ mph. 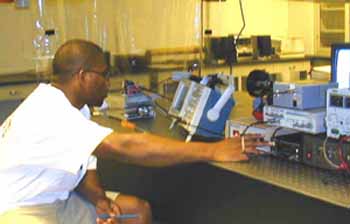 I have previously demonstrated some interesting interactions of very slow atoms with specially prepared magnetic surfaces, in work done while I was at Yale University. I built a system that used the new laser-cooling techniques to produce a cloud of very cold atoms, approximately one million atoms in a ball of 1 millimeter diameter. The system used to produce and hold the atoms is known as a magneto-optic trap (MOT), so called because it uses a combination of magnetic fields and lasers to slow and hold the atoms. The ball of atoms was released from the MOT and dropped onto a piece of magnetic recording tape 1 cm below. The tape was recorded with a periodic pattern designed to repel the slow atoms using magnetic forces. This was confirmed to be the case because we observed the atoms to rebound from the surface many times, much as a bouncing ball would do.

Cross-section drawing of magnetic tape recorded with a periodic pattern.

The exciting thing was that the atoms remained very slow (cold), even though they were bouncing off the relatively hot (room-temperature) tape. The key was that they never touched the surface itself, instead bouncing off the magnetic field just a few millionths of a meter from t [periodic magnetic field] he tape surface. A second experiment demonstrated that a container made from this prepared magnetic material acts as an insulating 'box' that can hold the atoms cold for a second or more (the current limitation is due to the presence of tiny amounts of warm air remaining in the evacuated experimental chamber).

Magnetic potential near the periodic surface

Even this short storage time may be useful. The most accurate atomic clocks in the world, completed only in the last year, rely on slow atoms that are observed for less than ½ second at a time (with observations repeated over and over). Longer single observation times would mean a more accurate measurement of the natural 'clock' present inside the atoms, but it is not currently possible to hold the atoms longer without heating or disturbing them. The novel container made from special magnetic surfaces is thus of considerable interest because it maintains their low temperature. In addition to publication in physics journals1-3, this research has been picked up by the popular science press, including Science News4and The New Scientist5.

The already completed research on slow atoms interacting with magnetic surfaces shows considerable potential, but so far makes no explicit test of the wave nature of the slow atoms. I am just beginning here at Holy Cross a program that will make use of more specially tailored magnetic surfaces that will reveal and put to use the wave character of very cold atoms.
A primary line of my research will be to demonstrate the wave nature of slow atoms using the phenomenon of diffraction: a wave of any sort that is incident upon a finely striped reflecting surface will scatter the wave off only at certain discrete angles. If we send a stream or beam of slow atoms at a surface that is magnetized in very fine stripes, then the atomic waves will diffract, rebounding from the surface as in the earlier research, but emerging in several distinct directions. While similar phenomena have been observed by other experimenters, it has never been done with the magnetic surfaces which have the unique properties discussed above.
In the long term, several other lines of research using cold atoms may be followed: (1) recombination of the atomic waves scattered at different angles would allow the study of atomic self-interference; (2) the slow atoms may be used to probe naturally-ordered magnetic materials such as antiferromagnetic crystals or materials with spin-density waves; or (3) the atoms themselves may be probed with light to search for effects involving the wave nature of both light and atoms.