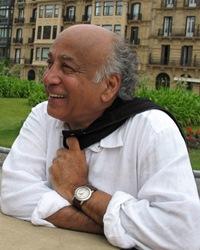 Shirish Korde is celebrated for “integrating and synthesizing music of diverse cultures into breathtaking works of complex expressive layers” Musical America. His music is influenced by diverse world music traditions ranging from the throat singers of Tuva and the ancient Vedic chants of India, to the shimmering colors of the Balinese Gong Kebyar Gamelan orchestra.  His distinctive music is performed throughout the United States and Europe.

He has composed five large-scale music/theatre works including Chitra and Rasa, which weave the ancient traditions of South and South East Asia into complex multihued frameworks.  Rasa was awarded an NEA opera grant and was premiered in 1999 by the Da Capo Chamber Players and the New York Virtuoso Singers at the Sonic Boom Festival at the Miller Theatre in New York. His most recent opera/dance drama, Chitra, commissioned by the Boston Musica Viva was presented by the Fleet Boston Celebrity Series in the spring of 2003, at the Tsai Performance Center, in Boston.

His close collaborations with musicians from diverse musical traditions are a hallmark of his distinctive voice.  The recent violin concerto, Svara-Yantra, a collaboration with virtuoso violinist Joanna Kurkowicz and master tabla player, Samir Chatterjee, was premiered in Katowice, Poland by the Polish National Radio Symphony Orchestra in the fall of 2005.  A reviewer called Svara-Yantra, “a haunting work, richly imbued with Indian colors and musical tradition, which offers something unique and powerful with all manner of exotic and imaginative texture and color from both soloist and orchestra. “

In the current season, the Boston Philharmonic Orchestra will give the U.S. Premiere of Svara-Yantra in October 2007. There will be several performances of the concerto under the direction of Ben Zander, featuring violinist Joanna Kurkowicz and tabla master Samir Chatterjee. In May 2008, the Boston Musica Viva will give the world premiere of Songs of Ecstasy featuring Zorana Sadiq, soprano, chamber ensemble and Indian classical dancer, Wendy Jehlen, at Tsai Performance Center at Boston University. Peggy Pierson and Windsor Music will premiere a new oboe quartet in their series in Lexington, MA in the spring of 2008. The Da Capo Chamber Players of New York will play Korde’s commissioned work, Blue Topeng 2, for chamber ensemble and Balinese Gamelan soloists in a series of concerts in the spring of 2008 in New York.

In the last season, Svara-Yantra was performed by the New Zealand Symphony Orchestra in Wellington at the Asia Pacific Festival in New Zealand in February 2007, and the Koszalin Philharmonic in Poland in June 2007.  This work was recently released on the Chandos label (www.Chandos.net) as an mp3 and on CD through Amazon.com and Neume.com. Nesting Cranes, for flute and string orchestra, will be premiered in the Chicago Symphony Orchestra’s Music NOW series by flutist Jennifer Gun, under the direction of Ludovic Morlot, in April of 2007. His other recent compositions include Blue Topeng, co-commissioned by the Fleet Boston Celebrity Series and Boston Musica Viva, which features the Balinese artist Desak Made Suarti Laksmi and Bethany Collier. They perform on specially designed Balinese gamelan instruments in combination with the soloists of the Boston Musica Viva. In the fall of 2004, several of his works were featured at the Exchange Festival of contemporary music at the House of World Cultures in Berlin featuring The Ensemble Modern. A song cycle based on the life of Phoolan Devi, India’s Bandit Queen, which combines the classical traditions of North and South India with contemporary musical techniques was premiered by Da Capo Chamber Players at Merkin Hall, New York in June 2006.

Shirish Korde is a composer of Indian descent who spent his early years in East Africa. He arrived in the United States in 1965, already well versed in the traditions of Indian and African music. He studied Jazz at Berklee College of Music, composition and analysis with Robert Cogan at New England Conservatory, and Ethnomusicology, especially Asian Music (including Indian drumming with Sharda Sahai), at Brown University. Currently, he is Professor of Music and Chair of the Music Department at the College of the Holy Cross.