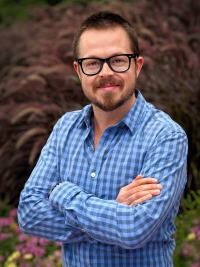 Schuyler Whelden is a Post-Doctoral Fellow in Ethnomusicology. His research focuses on popular music and protest in Brazil, examining political engagement by musicians through performative and non-performative means.

Prof. Whelden received his PhD in Musicology from the University of California, Los Angeles, where he studied with Tamara Levitz and Timothy D. Taylor. His dissertation, titled “The Political Voice: Opinião and the Musical Counterpublic in Authoritarian Brazil,” focuses on the musical theater production Opinião [Opinion], which was staged in Rio de Janeiro, São Paulo, and Porto Alegre in 1964 and 1965 at the outset of the Brazilian military dictatorship. Combining ethnographic and archival methods, he analyzes the songs and performances for their political resonances, listening along with audience members who attended the show.

Prior to his graduate work, Prof. Whelden studied ethnomusicology and composition at Wesleyan University. Supported by a Thomas J. Watson Fellowship, a Lenart Fellowship, and two Foreign Language and Area Studies Scholarships, Prof. Whelden has completed archival and ethnographic fieldwork in Brazil, Ghana, India, and Ireland. He has also worked as a professional songwriter and touring musician, performing across the United States and Canada.

Prof. Whelden has presented his work at annual meetings for the Society of Ethnomusicology, the British Forum for Ethnomusicology, the Latin American Studies Association, and the American Comparative Literature Association. As a graduate student, he served as Managing Editor of the Ethnomusicology Review’s “Sounding Board” and on the Editorial Board of Echo: a Music-Centered Journal. A chapter he co-authored with Nina Sun Eidsheim that analyzes how televised song competitions reinforce racialized listening practices appears in the Oxford Handbook of Timbre. He has taught courses on protest music, Latin American music, U.S. and U.K. popular music, and music and gender.