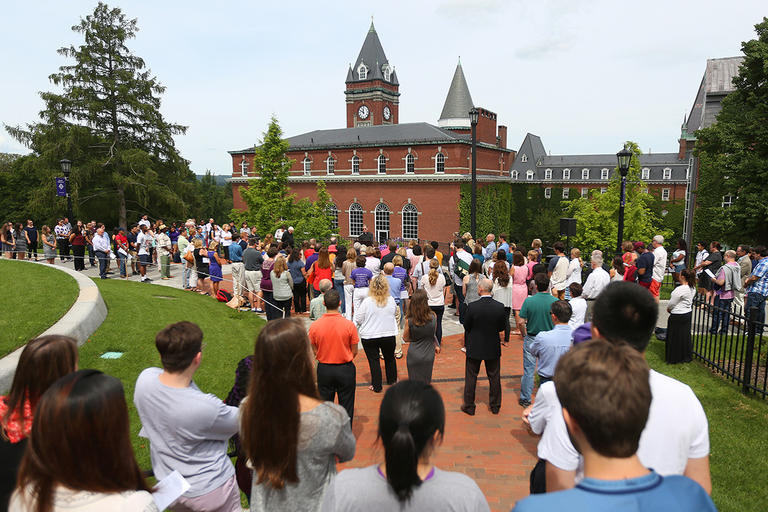 This morning we gather in sadness, in anger, in shock, in fear, in mourning. We have gathered many times in recent months out of concern for the killings of unarmed African-American men, for the safety of our Muslim sisters and brothers; for DACA students, immigrants and refugees; out of concern for countries torn asunder by war and the denial of human rights; and for the violence which targets women, the undocumented and the LGBTQ community. And we are tired and disappointed and disillusioned that our fears and our concerns continue to multiply and not diminish. Over the weekend we witnessed horrific violence in Charlottesville and at UVA by white supremacists, neo-Nazis, and the KKK. And we have seen how hate speech can divide, maim and kill.

And so we gather here because we need to experience the power of community, of prayer, and some sense of hope. Several of us gathered last night in front of City Hall for the same reasons. While this morning’s local paper highlighted the unfortunate divisive end to that gathering, the majority of those gathered and the speeches given were a call to be united and to act for the sake of our city, our country and our world — for the sake of our humanity. There was a repeated appeal to members of the white community to share and engage the issues which target and oppress members of our very diverse society. Again and again, we were reminded that “neutrality” and silence, in the end, permit oppressors to oppress.

At the rally, there were many impressive talks by the young, by community leaders, by activists, by religious leaders, by politicians. The sound system made it difficult for me to hear some of them, but one I could hear was Rabbi Valerie Cohen of Temple Emanuel Sinai. She thoughtfully remarked that she wasn’t alive during the height of the Civil Rights movement, and has often wondered how she would have responded to the issues of that time. As she sadly noted, those issues not only remain, but they are also becoming as violent now as they were then. Therefore, the questions for us today are, in fact, the same as they were 50 years ago. How are we going to respond? How are we going to become engaged? She and others from diverse faith communities appealed to us to take a stand and get involved; otherwise our Scriptures become just stories and our values are reduced to the unfulfilled ideals of the past.

Interestingly, in the Catholic tradition, today is the feast of St. Maximilian Kolbe, a Polish Franciscan priest, who defied the Nazis by helping refugees and Jews. For this, he was arrested by the Gestapo and taken to Auschwitz. When in reprisal for the escape of one of their prisoners, the Nazi guards randomly picked 10 prisoners to die, Kolbe volunteered to take the place of a young father of children, and he was killed. We honor him as a martyr.

And tomorrow is the 100th anniversary of the birth of Oscar Romero, Archbishop of San Salvador. He was assassinated while celebrating Mass due to his work with the poor and oppressed — efforts that were at odds with the military government of his country.

This is our time. We have to do more than pray. We have to act. In saying that, I do believe in the power of prayer — to give us courage, to purify our egos, to sustain our commitment, and to recognize that God is at work with us. And in the midst of action, our prayer can give us insight, freedom, and hope for the long haul.

That said, as an educational institution, this moment calls us to commit ourselves to fostering important dialogues between various communities on our campus. Our students seek the leadership of faculty and staff to help them thoughtfully and safely find ways of engaging difficult topics and a new sense of community. And these dialogues will invite each of us to learn how to listen, how to speak, how to reflect and how to "become more" for each other. Our cultural, racial, socioeconomic, religious and identity differences, when acknowledged and engaged, can transform us, and help us become more open, loving, just and compassionate.

We have a lot to do to prepare for this new semester and academic year, and we can’t wait for someone else to do it. It is our common responsibility for our students, for each other, for the sake of our country and for our humanity. With God’s help, let us do it. The consequences of not meeting this responsibility were made all too clear in Charlottesville this weekend.