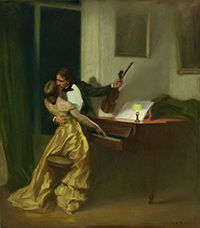 The concert is sponsored by the McFarland Center with the Departments of Music and World Languages, Literatures, and Cultures.

VICTOR SANTIAGO ASUNCIÓN, piano
Hailed by The Washington Post for his “poised and imaginative playing,” pianist Victor Santiago Asunción is recognized as an artist of innate musical sensitivity, fiery temperament and superb technique. As a recitalist and concerto soloist, he has appeared in major concert halls in Brazil, Canada, Japan, Mexico, Turkey and the Philippines. He played his orchestral debut at the age of 18 with the Manila Chamber Orchestra and his New York recital debut in Carnegie’s Weill Recital Hall in 1999. In addition, he has worked with conductors including Sergio Esmilla, Enrique Batiz, Zev Dorman, Arthur Weisberg, Corrick Brown, David Loebel, Leon Fleisher, Michael Stern and Bobby McFerrin.

In addition to his active performing career, Mr. Asunción is sought after as a piano, vocal, and chamber music coach. He received his Doctor of Musical Arts Degree in 2007 from the University of Maryland at College Park. His principal teachers include Rosario Picazo, Avelina Manalo, Roberta Rust and Rita Sloan. Victor Asunción is a Steinway artist.

MARKUS PLACCI, violin
Praised for having “a magnificent personality, a superb energy, a total command and an extremely convincing taste” (La Libre Belgique), young Italian violinist Markus Placci is enjoying a growing international reputation that has already brought him solo appearances throughout Europe, South America, Asia and the United States in renowned venues such as the Great Philharmonic Hall (Shostakovich Hall) and the Glinka Philarmonic Hall in St. Petersburg (Russia), the Kursaal in Baden-Baden, the Teatro Monumental in Madrid, the Auditori in Barcelona, the Teatro Comunale and Mozart Hall in Bologna, the Teatro Dal Verme in Milan, the Kennedy Center in Washington, Sanders Theater in Boston, and the Richardson Auditorium in Princeton.

Winner of the prestigious “XXVI Vittorio Veneto Competition” on a unanimous vote of the Jury presided by Maestro Bruno Giuranna, Mr. Placci is also the recipient of numerous other international awards and prizes such as the “Brahms Preis” and “Baden-Baden Philarmonie Foundation-Carl Flesch Preis” in Germany, and the “Jules C. Reiner Violin Prize” at Tanglewood. He was a top prize winner at the “Washington International Competition 2006.”

In September 2005, collaborating with conductor Uwe Mund and the RTVE Orchestra (Orchestra of the Radio-Television of Spain), Mr. Placci world premiered with great acclaim the Violin Concerto written by Catalan composer Jordi Cervello.' The concert was broadcasted live from Teatro Monumental in Madrid both on the radio and the national television (Tve2).  In 2007, Cervello' composed and dedicated to him his “Tre Pensieri” for violin and piano.

Throughout the years Mr. Placci has been broadcast live on prominent radio stations such as the BBC Radio, the RTVE-Spain, the Bartok Radio-Hungary, WGBH Boston and RaiRadio in Italy.

In 2007 Mr. Placci was appointed as Violin Faculty at The Boston Conservatory, being the youngest professor ever to have been appointed in that position.

In 2016 he was presented both with “The Boston Conservatory Outstanding Faulty of the Year,” and with the MA ASTA (America Strings Teachers Association) “Best Studio Teacher of 2016” award.

Markus Placci plays on a 1871 J.B. Vuillaume violin, copy of the “Alard” Stradivari.

JAN MÜLLER-SZERAWS, cello
The central questions of how music connects people — it's mysterious magnetism, seductiveness, and power to affect us on so many levels — has lead cellist Jan Müller-Szeraws’ musical journey from his native Chile over Europe to the United States, exploring it as a soloist, chamber musician and teacher.

He has been a guest artist at many festivals including the Cape & Islands, Rockport, El Paso Pro-Musica, Strings in the Mountains, Delaware, Music at Gretna, Florida Arts, Sebago Long Lake and Kingston Chamber Music Festivals, the Garth Newel Music Center and the European Chamber Music Association.

His solo performances include the world premiere and recording of Bernard Hoffer's Concerto di Camera II for solo cello and ensemble written for him, the Boston premiere of Gunther Schuller’s cello concerto and John Harbison's and Chou Wen-Chung’s cello concertos with the New England Philharmonic, Schumann concerto with the Orquesta Sinfónica de Concepción and Orquesta de la Universidad de Santiago de Chile, Shostakovich concerto no.1 and Brahms double concerto with violinist Bayla Keyes and the Concord Orchestra (MA), Dvorak concerto with the Boston Landmarks Orchestra and Tchaikovsky’s Rococo Variations with the Moscow Symphony Orchestra at the Great Hall of the Moscow Conservatory.

As guest principal cellist he was invited to join the Bamberg Symphony Orchestra for two projects, including a live concert broadcast of Bavarian Broadcasting of Shostakovich's Symphony no. 15 with Mikhail Pletnev conducting as well as a tour to China.

​He has been broadcasted by radio and TV stations in the United States, Chile and Germany, and recorded Pedro Humberto Allende’s cello concerto with the Orquesta Sinfónica de Chile, which was released by the Chilean Academy of Fine Arts as part of the celebration of the two-hundredth anniversary of Chilean Independence.

Other recent projects include the release of "Anusvara," a disc with music by Shirish Korde for cello, tabla and carnatic soprano, the premiere of "Mutations" for solo cello and computer by Chris Arrell and the premiere and recording of Thomas Oboe Lee's "Suite for Solo Cello," both written for him, as well as a recording of sonatas for piano and cello by Brahms and Chopin with pianist Adam Golka for Hammond Performing Arts and a series of recitals for cello and harp with harpist Sivan Magen.

Since September 2014, Müller-Szeraws is Artist-in-Residence at the College of the Holy Cross where he coordinates the Performance Program. He is also artistic director of the Chamber Music Institute at Holy Cross, an intensive chamber music summer immersion program for gifted high school and college students. Müller-Szeraws has been artist and teacher in residence at the "Jornadas Musicales Internacionales de Invierno" in Concepción, Chile and has taught Master Classes at the Garth Newel Music Center, Columbus State University and Academia de Música Antonio Vivaldi, Concepción. He was a guest lecturer at the Universidad Católica de Chile and currently teaches at the Phillips Academy Andover.

Müller-Szeraws is a prize-winner at the Washington International Competition, as well as a grant recipient of the Saul and Naomi Cohen Foundation, which is generously lending him a cello by David Tecchler (1717).

Jan Müller-Szeraws studied at the Musikhochschule Freiburg, Germany and holds a Bachelor and Master of Music Degree from Boston University. His teachers include Andrés Díaz, Christoph Henkel, Arnaldo Fuentes and Javier Santamaría.