Party Labels: What do they mean? Do they matter? 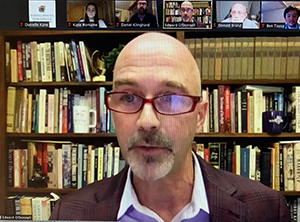 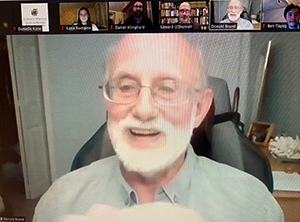 Tuesday, September 15, 2020
Two popular Holy Cross professors, Political Science Professor Donald Brand and History Professor Ed O'Donnell, discuss the meanings of party labels and political ideology. What does it mean to be a Republican or Democrat, conservative or progressive? How have those identities changed over the decades? After the event, students lead a conversation about how party labels fit (or don't fit) them.

Tuesday, September 15, 2020
Throughout the semester, we’ll provide links to listen in on some great discussions in the "Presidential Elections" Academic Internship Seminar. The course is taught by former Congressman Tim Bishop and top Mitt Romney aide Peter Flaherty and features a roster of prominent guest speakers from John Sununu to Paul Ryan and Mark Cuban. Students can join the class for the day by registering ahead of time. This week, guest speaker Kasie Hunt, former embedded journalist covering presidential campaigns, currently NBC News Capitol Hill Correspondent and host of MSNBC's Kasie DC, will explain the role of the media in presidential campaigns, what it's like to cover the White House, and the state of political journalism.

Lincoln, the Founders, and the Rights of Human Nature

Thursday, September 17, 7 p.m. EDT
The role of the American Founders is increasingly under public scrutiny, as advocates of racial justice demand the removal of their statues from the public square and call for a reappraisal of their role in American history. In this Constitution Day Lecture, Lucas E. Morel, John K. Boardman, Jr. Professor of Politics at Washington and Lee University and a widely-recognized scholar of Abraham Lincoln, argues that Lincoln was engaged in a similar argument in his own time. Morel is the author of Lincoln and the American Founding (Southern Illinois University Press, 2020).

Marisa George '21 recommends this analysis from fivethirtyeight: Why GOP Senators Are Sticking With Trump — Even Though It Might Hurt Them In November and from the Wall Street Journal Editorial Board: Joe Biden's Me-Too Covid Plan.

Professor Daniel Klinghard shares this Washington Post interview with the authors of Four Threats: The Recurring Crises of American Democracy and this American Conservative piece, Where National Populism Came From.

McFarland Center Director Tom Landy recommends David Brooks’ analysis in the New York Times, Where Do Republicans Go From Here?, and in the Wall Street Journal: Joe Biden United the Democrats—It’s Not Likely to Last.

Professor Maria G. M. Rodrigues recommends an article in Modern Intellectual History by Dorothy Ross: “Are we a nation?”: The conjuncture of nationhood and race in the United States, 1850–1876 and in the Georgetown Journal of International Affairs: Trump's Populism and the Future of Democracy: Lessons from Latin America.

Ben Tayag '21 recommends two articles in the Atlantic: The Decline of the 'Great Equalizer' and How Ed Markey Defeated Joe Kennedy, a New York Times piece on How Decades of Racist Housing Policy Left Neighborhoods Sweltering and in Commonwealth Magazine, Doubling Down on the Past: MassDOT, Boston stick with auto-centric approach.

Thursday, September 17, 4 p.m. EDT
Join the Edward M. Kennedy Institute for the United States Senate and the Higher Education Consortium of Central Massachusetts for a Constitution Day forum on Massachusetts’s Ballot Question #2. Moderated by GBH's Carrie Saldo, the conversation will include Paul Diego Craney, spokesperson and board member of Massachusetts Fiscal Alliance, and Evan Falchuk, board chair of the Yes On 2 campaign.
Learn more»

An Ignatian Guide to Civic Engagement 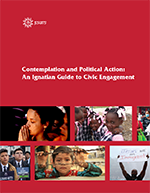 Fr. Jim Stormes, S.J., Rector, pointed us to this guide on Contemplation and Political Action: An Ignatian Guide to Civic Engagement recently published by the Jesuit Conference of Canada and the United States. "The document is a reflection on how our faith and Ignatian values might guide our pursuit of the common good in the public square," explains Fr. Timothy P. Kesicki, S.J., President of the Conference. It offers spiritual guidance as we face the pandemic, system racism, environmental peril, and growing political division.