Martha Redbone is one of the most vital voices in American Roots music. Inspired by her family lineage in the Appalachian Mountains, Redbone and a cast of actor-musicians present an epic journey of one woman's return to her homeland. Spanning the lives and stories of four generations of women in a Cherokee family, it is a story about the family's connection to the land — the simplicity and sacredness of that connection and the ruptures that threaten to extinguish it.

Written by Martha Redbone, Aaron Whitby and Roberto Uno, with original compositions by Redbone and Whitby 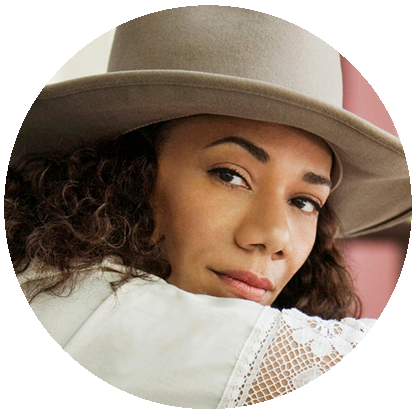 Martha Redbone is one of the most vital voices in American roots music. A multi-award-winning musician, the charismatic songstress is celebrated for her tasty gumbo of music embodying the folk and mountain blues sounds of her childhood in the Appalachian hills of Kentucky mixed with the eclectic grit of her teenage years in pre-gentrified Brooklyn. With her gospel-singing father's voice and the spirit of her Cherokee/Choctaw mother's culture, Redbone broadens the boundaries of Americana.

Redbone and her long term collaborator, pianist Aaron Whitby, are called "the little engine that could" by their "band of NYC's finest blues and jazz musicians" (Larry Blumenthal—Wall Street Journal). From humble beginnings with residencies at the original Living Room on the Lower East side and at Joe's Pub, and nationally at powwows across Indian Counry, Redbone has built a passionate fan base with her mesmerizing presence and explosive live shows.

About "Bone Hill: The Concert"

Bone Hill is a new musical work for theater created and developed by librettist/composers Martha Redbone and Aaron Whitby at Joe's Pub and the Public Theater. In its current iteration, Redbone becomes the characters from four generations of a family in the hills of coal-mining Appalachia, and the musicians are the townsfolk. In hearing their stories, the audience is taken on an epic, unexpected American exploration of family, history, and cultural identity.

Inspired by her own life and the women Martha Redbone is descended from, the lives of the Bone family members are told in songs that span a swathe of American music telling a parallel history — from traditional Cherokee chants and lullabies to bluegrass, blues, country, gospel, jazz, rock'n'roll, and R&B.

Dark and violent at times, Bone Hill is uncompromising in its desire to be honest about uncomfortable subjects particularly colonization and race. It is an epic story of one woman's return to her homeland on Black Mountain and the coalmines of Harlan County, KY where her family has dwelled for centuries. It is a story about the family's connection to the land — the simplicity and sacredness of that connection and the ruptures that threaten to extinguish it. The journey brings to light an important piece of American history that has remained untold; it reveals erased, forgotten truths and it does so with humor, pathos and exuberance.

The Inverted Landscape: A conversation about environmental devastation and its impact on home and place

Two artists, an environmental activist, and a sociologist contemplate the story of loss and destruction through human-caused environmental degradation. Daina Harvey, Assistant Professor of Sociology, Cristi Rinklin, artist and Professor of Visual Arts, Daniela Rivera, artist and Associate Professor of Art, Wellesley College, and Vivian Stockman, Vice Director of the Ohio Valley Environmental Coalition will explore how environmental destruction of a place bears upon the psyche of its inhabitants, and how images and works of art that address these topics resonate with an audience.

Co-sponsored by the Department of Visual Arts, Environmental Studies and Arts Transcending Borders

Free and open to the public