Emmy and Peabody Award-winning journalist Michele Norris, longtime NPR host, founder of The Race Card Project and executive director of The Bridge, will address this year’s graduates during the College of the Holy Cross Commencement ceremonies on Friday, May 25, at 10:30 a.m. at the DCU Center in Worcester.

Norris is one of the nation's most recognized voices in radio, having served as NPR’s first African-American female host of its flagship program “All Things Considered.” From 2002 to 2015, she interviewed world leaders, American presidents, Nobel laureates, leading thinkers, groundbreaking artists, even astronauts traveling in outer space.

While working at NPR, Norris created The Race Card Project, an initiative to foster a wider conversation about race in America, by inviting people to submit comments on their experience of race in six words. The project was spurred by the publication of Norris' family memoir, "The Grace of Silence," where she examines how America talks about race in the wake of the Obama presidential election, and explores her own family's racial legacy. In 2017, The Race Card Project became the cornerstone of The Bridge, a new initiative of the Aspen Institute, a program on race, identity and inclusion.

Prior to her tenure at NPR, Norris served as an ABC News Correspondent based in Washington D.C. where she covered the White House. She also spent time as a print reporter, serving as a staff writer for The Washington Post, The Chicago Tribune and the Los Angeles Times. She has also written for Time and National Geographic magazines.

Norris attended the University of Wisconsin and graduated from the University of Minnesota in Minneapolis. She currently resides in Washington, D.C., with her husband, Holy Cross alumnus Broderick Johnson ’78.

Norris will be given an honorary degree during Commencement. In addition to Norris, the College will award honorary degrees to the following individuals during the ceremony:

David P. Ryan, M.D. '88 is chief of the division of hematology and oncology at the Massachusetts General Hospital, clinical director at the Massachusetts General Hospital Cancer Center and a foremost figure in the research and treatment of gastrointestinal cancers. He is also a Professor of Medicine at the Harvard Medical School. Ryan is a graduate of College of the Holy Cross and Columbia College of Physicians and Surgeons, and was a resident at NY Presbyterian/Columbia University and a fellow in hematology-oncology at the combined Massachusetts General Hospital/Brigham and Women’s Hospital/Dana-Farber Cancer Institute program. He is a member of the American Association for Cancer Research, and the American Society of Clinical Oncology. He sits on the editorial board of Clinical Cancer Research and The Oncologist. He and Vicki Jackson, M.D., the chief of palliative care at Massachusetts General Hospital, and award-winning journalist Michelle D. Seaton, recently wrote a book, "Living with Cancer: A Step-by-Step Guide for Coping Medically and Emotionally with a Serious Diagnosis." In the book, Ryan takes a whole-person approach to patient care, which has been the cornerstone of his career, combining information for patients and families on oncology as well as palliative care. Ryan has strong family ties to Holy Cross with his wife Carol '88, son Christopher '16, brother John Ryan ’83, sister Sheila Ryan Ring '84, brother Edward "Ted" Ryan '90, sister-in-law Paula K. Ryan ’90, brother Donal Ryan ’91, brother-in-law John A. Markey, Jr. '86, sister-in-law Lynne F. Markey ’88, sister-in-law Jennifer M. Golden '90, brother-in-law Dennis Golden ‘89 and sister-in-law Kara M. Ryan ‘96 having graduated from the College.

Ellen S. Dunlap is president of the American Antiquarian Society, a position she has held since 1992. Under her helm, the Worcester-based historical organization was awarded the 2013 National Humanities Medal by President Barack Obama for the organization’s role in “safeguarding the American story.” Founded in 1812 by Revolutionary War patriot and printer Isaiah Thomas, the American Antiquarian Society is both a learned society and a major independent research library of pre-twentieth century American history and culture. Prior to joining the American Antiquarian Society, Dunlap held positions of director of the Rosenbach Museum and Library in Philadelphia, and research librarian at what is now the Harry Ransom Center at University of Texas at Austin. Dunlap was instrumental in the founding of the Philadelphia Consortium of Special Collections Libraries in 1985 and has served as chairman of the Worcester Cultural Coalition, which she helped to found in 1995. She served as president of the board of the Massachusetts Foundation for the Humanities from 2002 to 2004, and is a former chairman of the Nonprofit Support Center, a program of the Greater Worcester Community Foundation, where she also served as board member and clerk. Dunlap received both her bachelor's and master's degrees from the University of Texas at Austin. 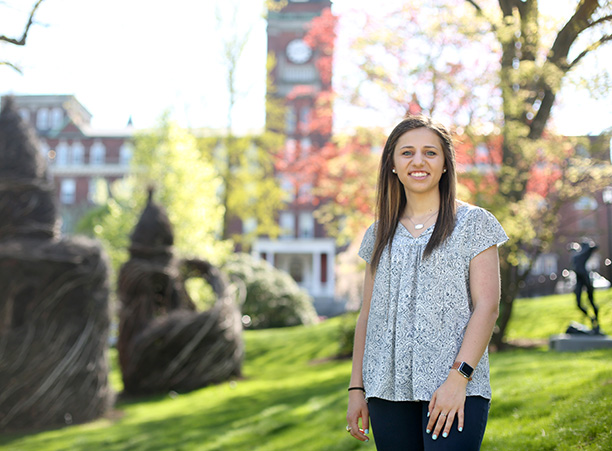 Taylor K. Pels ’18 has been selected to deliver the Class of 2018 valedictory address at the Commencement ceremony on Friday, May 25.

Pels is a chemistry major in the Health Professions Advising Program, is a member of both Phi Beta Kappa and the Alpha Sigma Nu Jesuit Honor Society, and is a Sheehan Scholar. She is from Chattanooga, Tennessee.

While at Holy Cross, Pels has been very involved in the Big Brothers Big Sisters Program of Central Massachusetts where she has mentored a young girl in the Worcester community. For the past two years, she has conducted research in the organic chemistry lab of Brian Linton, associate professor of chemistry, and also participated in toxicology research at the University of Virginia School of Medicine last summer. She has served on the planning committees for Holy Cross Dance Marathon benefiting the Elizabeth Glaser Pediatric AIDS Foundation and Holy Cross’ second annual Women in Science Day, a conference celebrating the involvement of young female students in science. She was both a Peer Assistant Learning tutor and STEM+E tutor, and worked as a teaching assistant in introductory chemistry labs. Pels was also a member of the Holy Cross cheerleading team and served as a fall orientation leader.

Following graduation, Pels plans to spend a year doing clinical or biomedical research prior to pursuing a medical degree and career as a pediatrician.

Pels was selected as valedictorian from a group of academically outstanding members of the senior class, each of whom submitted speeches for consideration. The Valedictorian Selection Committee — composed of students from the senior class, faculty members and administrators — reviewed the submissions, and the final selection was made by Margaret Freije, provost and Dean of the College.