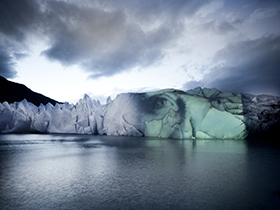 Jan. 25–April 14
10 a.m.–5 p.m. M-F; Noon–5 p.m. Sat.
Cantor Art Gallery, O’Kane Hall
"Last Frontier/Última Frontera: La Subjetividad del Territorio"
This exhibition of installation, photography, sculpture, and video presents the work of contemporary Latin American artists exploring the border/ frontier as a dividing line between states; lived experience vs. media portrayals; the dissolution of borders through globalization; borders as an experience of “us” vs. “them”; and the blurring lines between virtual and natural spaces. Curated by V. Nicolás Koralsky, with original concept by Arte Bajo Cero (Julio Gaete Ardiles and Sebastián Trujillo). Koralsky serves as director for the College’s study abroad program in Buenos Aires and collaborated with the Spanish department and the Cantor Art Gallery to bring the exhibition to Holy Cross. 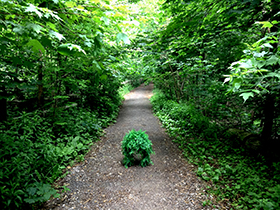 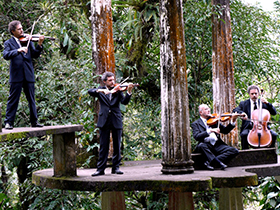 Jan. 31, 8 p.m.
Brooks Concert Hall
Cuarteto Latinoamericano: “Tribute to the Americas”
Cuarteto Latinoamericano is one of the world’s most renowned classical music ensembles. Winners of the 2012 and 2016 Latin Grammys for Best Classical Recording, the quartet is coming to Holy Cross for the first time, presenting a program with music by Gershwin, Ginastera, Dan Roman, Copland and Leo Brouwer. The leading proponent of Latin American music for string quartet for 35 years, the Cuarteto has toured extensively throughout Europe, North and South America, Israel, China, Japan and New Zealand. They have premiered more than a hundred works written for them and they continue to introduce new and neglected composers to the genre. 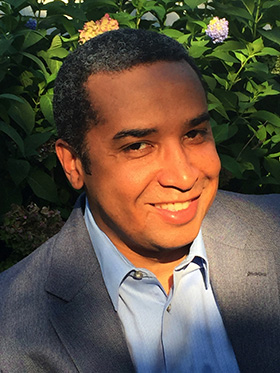 Feb. 1, 7:30 p.m.
Rehm Library, Smith Hall
Reading by Jerald Walker
The Working Writers Series offers readings, panel discussions, and Q&A sessions with some of America’s best authors. Join us as we kick off the new semester with a reading by nonfiction writer Jerald Walker. Publishers Weekly called his first memoir, "Street Shadows: A Memoir of Race, Rebellion, and Redemption," recipient of the 2011 PEN New England Award for Nonfiction, a “spectacular debut.” Vivian Gornick lavished praise on his second memoir, "The World in Flames: A Black Boyhood in a White Supremacist Doomsday Cult," saying, “Jerald Walker has a remarkable story to tell, and he tells it with a wealth of grace and intelligence at his command.” Cosponsored by Creative Writing, the Office of Diversity and Inclusion, and Africana Studies 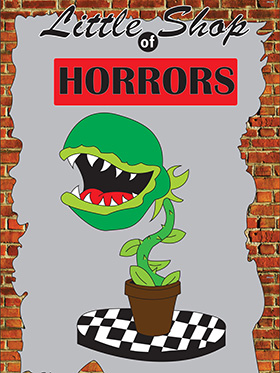 Feb. 2–4 at 8 p.m.; Feb. 4–5 at 2 p.m.
Fenwick Theatre, O’Kane Hall, 2nd floor
"Little Shop of Horrors"
Music by Alan Menken; book and lyrics by Howard Ashman
In this musical update of the Faust story, a nerd who works in a Skid Row flower shop makes a bargain with the devil in the form of a cannibalistic talking plant named Audrey II that promises him success, both financial and romantic. All the plant asks in return is the occasional fresh corpse. For the Alternate College Theatre production of this hilarious musical, Julia McCarthy ’15, who staged "The 27th Annual Putnam County Spelling Bee" two years ago, returns to Holy Cross to direct. Ticket box office: 508-793-3536 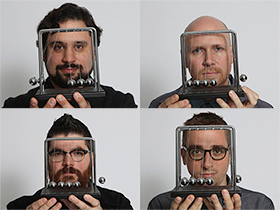 Feb. 9, 8 p.m.
Fenwick Theatre, O’Kane Hall, 2nd floor
"A Gun Show"
Sō Percussion with Emily Johnson, directed by Ain Gordon
“This group plays with an irresistible vitality.” -The Washington Post
What is it about our collective psyche that fastens so tightly to guns? "A Gun Show" is an exploration of issues such as race, economic inequality, public safety and constitutional rights through music, text and movement. The work originated as a way for the artists to process their emotions after the unfathomable school shootings in Newtown, Conn., but has since grown into a much larger collaborative process and conversation. With its innovative multi-genre original productions, sensational interpretations of modern classics and “exhilarating blend of precision and anarchy, rigor and bedlam” (The New Yorker), Sō Percussion redefines the scope of the modern percussion ensemble. For over 15 years, the ensemble has engaged in creative collaborations and released 16 albums. 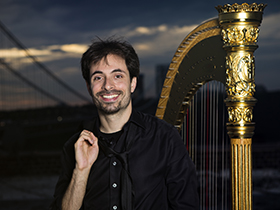 Feb. 14, 8 p.m.
Brooks Concert Hall
“Music from France and Spain”
Jan Müller-Szeraws, cello; Sivan Magen, harp
The ethereal sound world of the magical combination of cello and harp is explored by Israeli harp-eminence Sivan Magen, and cellist and Artist-in-Residence Jan Müller-Szeraws in a riveting program featuring French and Spanish music, including Magen’s own arrangement of the Debussy cello sonata and the famous Suite Popular Española by Manuel de Falla. 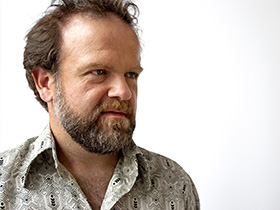 Feb. 23, 7:30 p.m.
Rehm Library, Smith Hall
The Vocation of the Writer Talk with Ander Monson
A writer of fiction, nonfiction, and poetry, Ander Monson will talk about what it means to be a writer and a reader. He is the author of six books of fiction, nonfiction, and poetry, most recently "Letter to a Future Lover" (Graywolf, 2015). In a review on NPR, Michael Schaub observes, “'Letter to a Future Lover' ... is a breathtakingly original, thoughtful consideration of what it means to be a reader — or a writer, or a human being. His focus isn’t books, exactly, but rather the things we find in them: notes, date due slips, scrawlings in the margins. As an essay collection, it’s magnificent; as a love letter, it’s a work of overwhelming devotion and generosity.”

Co-sponsored by Creative Writing and the McFarland Center for Religious, Ethics and Culture

March 16, 7:30 p.m.
Rehm Library, Smith Hall
Reading by Pamela Painter
Meet Pamela Painter, author of four story collections, most recently "Ways to Spend the Night." She has received grants from The Massachusetts Artists Foundation and the National Endowment of the Arts, and won three Pushcart Prizes and Agni Review’s The John Cheever Award for Fiction. 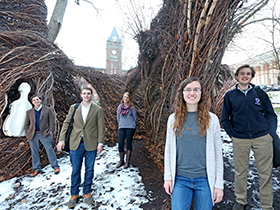 March 16, 8 p.m.
Brooks Concert Hall
"Faith in Spring: Music and Nature"
Artist-in-Residence Concert
Since time immemorial, artists have reached out for inspiration into the mysteries and wonders of nature. This nature-themed program explores the musing, inspiration, and search for meaning in some of the gems from the classical repertoire. It will be performed by students of the music department in collaboration with the department’s own Artists-in-Residence: Adam Golka, Saul Bitrán and Jan Müller-Szeraws. This program is offered in conjunction with Stickwork: Just Off the Beaten Track, created with the help of over 300 volunteers by environmental artist Patrick Dougherty during his Fall '16 Arts Transcending Borders residency, on view through 2017, Linden Lane lawn (main campus entrance). 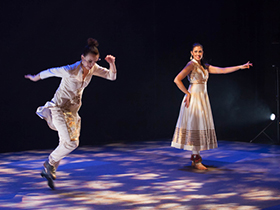 March 27, 8 p.m.
Hogan Ballroom
"SPEAK"
Indian Kathak dance and American tap dance, continents and ages apart, share parallel stories of struggle and perseverance. They come together in this extraordinary collaboration that is rhythm, poetry, storytelling, music and dance. "SPEAK" carries forward the legacy of iconic artists like Pandit Chitresh Das, Jimmy Slide and James Buster Brown, while bringing to the forefront the voices of a new generation of female artists. Serving as the bridge between tradition and innovation, history and progress, Rina Mehta, Rachna Nivas, and Dormeshia Sumbry-Edwards create nothing short of magic on the stage. Joined by leading Indian classical and jazz musicians, "SPEAK" promises to thrill, provoke and move your spirit. 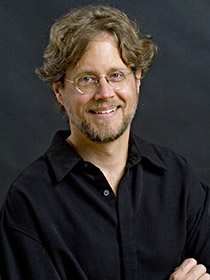 March 30, 8 p.m.
Brooks Concert Hall
Xak Bjerken, piano
Pianist Xak Bjerken presents a diverse program that explores how composers create color at the instrument from the cool moonlight of Debussy and the black sparkle of Scriabin, to recent kaleidoscopic works by Steven Stucky and Stephen Hartke. 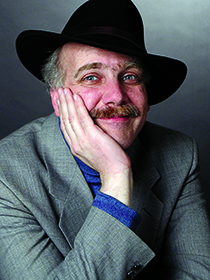 March 30–31, April 1, April 6–8, 8 p.m.
Fenwick Theatre, O’Kane Hall 2nd floor
"The Royal Family" By George S. Kaufman and Edna Ferber
Steve Vineberg, Distinguished Professor of Arts and Humanities, directs this American comedy classic about three generations of a famous theatrical family — fascinating narcissists whose offstage lives teem with melodrama. The matriarch, Fanny, is preparing to come out of retirement while her celebrated daughter Julie and her granddaughter Gwen, a rising star, struggle with their shared desire to give up the stage for a normal domestic life. Then there’s Julie’s brother Tony, a whirling dervish who whips in and out of their lives whenever he’s in retreat from his latest scandal. Ticket box office: 508-793-2496 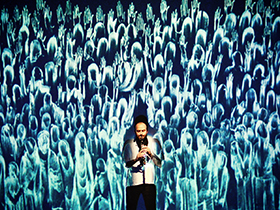 April 4, 8 p.m.
Seelos Theater, Kimball Hall
"Home Within"
Kinan Azmeh, composer & clarinet; Kevork Mourad, live illustrations, visuals
"Home Within" is an audio-visual project by Syrian composer and clarinetist Kinan Azmeh (Yo-Yo Ma’s Silkroad Ensemble), and Syrian-Armenian visual artist Kevork Mourad. In this work, art and music develop in counterpoint to each other, creating an impressionistic reflection on the Syrian revolution and its aftermath. The artists document specific moments in Syria’s recent history and reach into their emotional content in a semi-abstract way.

April 7, 8 p.m.
Brooks Concert Hall
Music Worcester
Lara St. John, violin
Fiery violinist Lara St. John will perform with pianist Matt Herskowitz featuring works from their new album “Shiksa/Lavuta.” Lavuta, the Romanian word for violin, is a program of songs of the Jewish Diaspora from and around Eastern Europe. Sponsored by Music Worcester in collaboration with the Department of Music. Tickets: www.MusicWorcester.org 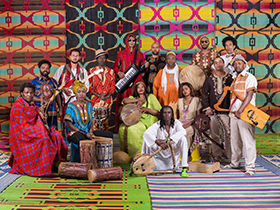 One of the tightest cross-cultural collaborations in history, the Nile Project brings together musicians from the 11 Nile countries to make new music that combines the rich diversity of one of the oldest places on Earth. Using music to spark cultural curiosity, the Nile Project engages musicians and audiences, encouraging them to feel connected to the world’s longest river and to explore new approaches to its large-scale social, cultural, and environmental problems. 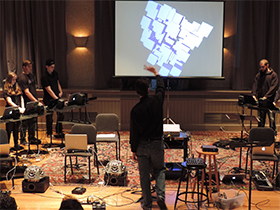 April 20, 8 p.m.
Brooks Concert Hall
Spring Concert
Holy Cross Jazz Ensemble
The spring concert of the Holy Cross Jazz Ensemble will include a variety of music from classic jazz repertoire, including the music of Duke Ellington and Charlie Parker. The concert will also include music from the Great American Songbook, and will feature our special guest, Marshall Wood, who played bass with the legendary Tony Bennett.

Violinist Markus Placci, pianist Victor Santiago Asunción and cellist Jan Müller-Szeraws join forces in a program featuring Beethoven’s iconic Kreutzer Sonata as well as Tchaikovsky’s epic Piano Trio in a minor in a program which is part of the international conference “Tolstoy and Christianity” organized by Predrag Cicovacki, professor of philosophy, and Olga Partan, assistant professor of Russian. Sponsored by the Department of Philosophy and the Department of Modern Languages.

April 28, 8 p.m.
St. Joseph Memorial Chapel
Farewell to Seniors
Holy Cross College Choir and Chamber Singers
This concert is a sampling of our graduating seniors’ favorite songs over the past four years. Join us as we say farewell to our seniors! 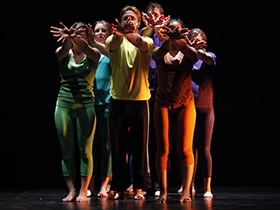 Our annual spring dance concert showcases vibrant work by the students in our Modern, Ballet and Jazz classes, choreographed by our talented Department of Theatre faculty members, Kaela Lee, Jimena Bermejo and Audra Carabetta. A highly entertaining evening that always brings the season to a spectacular close. 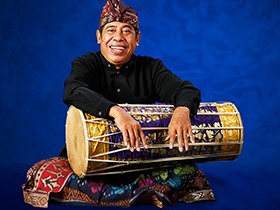 May 6, 8 p.m.
Brooks Concert Hall
Gamelan Gita Sari Concert
One of Bali’s most renowned master artists of traditional dance/theatre, I Nyoman Catra specializes in the Kecak monkey dance and masked temple performances known as Topeng. A treat for all ages, the Balinese dance concert provides an opportunity for the community to experience the awe and wonder of the sacred art of Bali.