All events are free and open to the public unless otherwise noted. 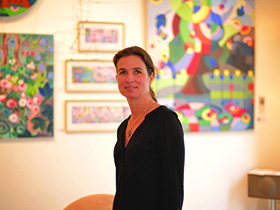 Colored musical scores inspired by Claude Monet’s “Water Lilies” Landscapes
French painter Gabrielle Thierry’s series “The Musicality of the Water Lilies” was inspired by her rediscovery of the “Water Lilies” landscapes of Claude Monet. With special permission to paint on site in the Musée de l’Orangerie in Paris, she translated eight of Monet’s landscapes into colored musical scores. Her recent work has concentrated on visual representations of music, and strives to show interactions between color, form, notes, and musical compositions.
Cantor Art Gallery 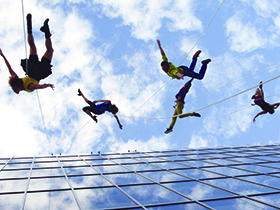 Sept. 8 | 4:30, 5:30, 6:30 p.m.
Hogan Campus Center Façade
BANDALOOP
Pioneers in vertical dance performance, BANDALOOP intertwines intricate choreography, dynamic physicality and the laws of physics by turning the dance floor on its side, taking their performances out of the studio and onto skyscrapers, bridges, billboards, historical sites and even cliff faces. Using the façade of the Hogan Campus Center as its “stage,” BANDALOOP will activate the first-ever Festival of the Arts at Holy Cross with three ethereal 15-minute performances on Sept. 8. Guests are welcome to bring blankets and lawn chairs to enjoy the outdoor performances. In case of inclement weather, performances will take place on Sept. 9, times TBD.
Arts Transcending Borders 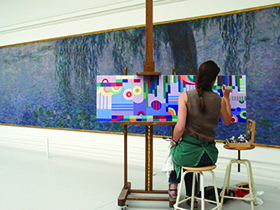 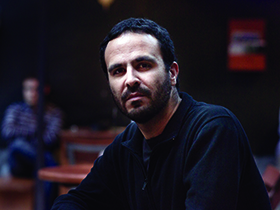 Sept. 21 | 7:30 p.m.
Levis Browsing Room, Dinand Library
Reading by Rodrigo Hasbún
The Working Writers Series offers readings, panel discussions, and Q&A sessions with some of America’s best authors. Join us at our first fall event to hear Bolivian writer Rodrigo Hasbún read from his new novel "Affections." Loosely based on real events, "Affections" tells the story of an eccentric family of post-World War II German immigrants to Bolivia who embark upon an adventure to find the legendary Inca city, Paitití. Adam Haslett calls "Affections" “an act of literary hypnosis you won’t soon forget” and Jonathan Safran Foer says of Hasbún, “He is not a good writer, thank goodness. He is a great one.” Hasbún is the author of a previous novel and a collection of short stories, two of which have been made into films, and his work has appeared in Granta, McSweeney’s, Zoetrope: All-Story, Words Without Borders, and elsewhere. “Affections” received an English PEN Award and has been published in twelve languages.
Creative Writing and Department of Spanish

Oct. 1 | 2 p.m.
Mary Chapel
“Antigone in Ferguson” by Theater of War Productions
What happens when personal conviction and state law clash, and violence ensues? In this groundbreaking social justice project, a dramatic reading of scenes from Sophocles’ “Antigone” by acclaimed stage and screen actors serves to help bridge the growing divide between law enforcement and local communities across the U.S. Holy Cross choristers join members of a community choir from Ferguson, Missouri, where the project originated following the police killing of Michael Brown, performing the choruses of “Antigone” set to gospel music.
Arts Transcending Borders 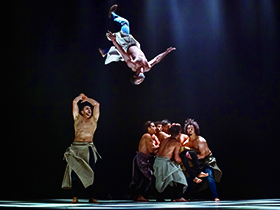 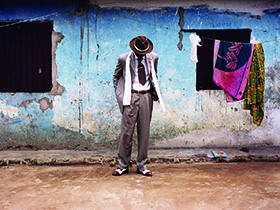 Oct. 18 – Dec. 15 | 10 a.m.–5 p.m. M-F; Noon–5 p.m. Sat.
Cantor Art Gallery
“Envisioning the Music of Ismael Rivera”
Photographs by Christopher Lopez
S.A.P.E.: Societe des Ambianceurs et des Personnes Elegantes/Society of Tastemakers and Elegant People
Photographs by Héctor Mediavilla
Two concurrent exhibitions of photographs will be shown in conjunction with the Holy Cross conference “Rethinking the Afropolitan: The Ethics of Black Atlantic Masculinities on Display.” New York-based photographer Christopher Lopez’s “Making Visual the Music of Ismael Rivera,” a series of images taken on location in Puerto Rico, were inspired by the music of one of the island’s most beloved musicians of the 20th century, Ismael Rivera. Spanish photographer Hector Mediavilla captured the fascinating world of Congolese men known as Sapeurs, who have, since the early part of the 20th century, dressed as elegant French men. Members of the Societe des Ambianceurs et des Personnes Elegantes, or Society of Tastemakers and Elegant People, perform a highly personal art form of style and manners, for display and friendly competition, against a backdrop of urban poverty.
Cantor Art Gallery 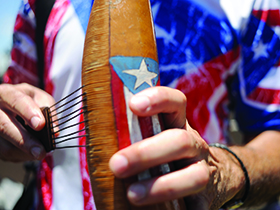 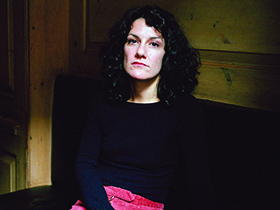 Oct. 18 | 7:30 p.m.
Rehm Library, Smith Hall
Reading by Adrian Nicole LeBlanc
Beginning in 1990, writer Adrian Nicole LeBlanc started reporting on the struggles of two women dealing with love, growing families, and prison time in the Bronx. The result was the highly acclaimed 2003 nonfiction book, "Random Family: Love, Drugs, Trouble, and Coming of Age in the Bronx." The New York Times called the book, “a painstaking feat of reporting and of empathy” and in a starred review Publishers Weekly praised LeBlanc for showing “how demanding poverty is” in “prose [that] is plain and unsentimental.” "Random Family" was named one of the Top Ten Works of Journalism of the Decade by the Arthur L. Carter Institute of Journalism at NYU, and in 2006, LeBlanc won a MacArthur Fellowship. LeBlanc is currently completing a nonfiction book about stand-up comedy. Join us for her reading.
Creative Writing

Oct. 20 | 8 p.m.
Hogan Ballroom
Gonzalo Grau: “Tribute to Ismael Rivera: An Afro-Caribbean Icon”
At the height of his career in the 1970s, Puerto Rican singer Ismael Rivera shared the stage with salsa greats such as Benny Moré, Tito Puente and Celia Cruz, and revolutionized tropical music with his unique singing style and improvisational skills. Today, he is lionized in various Afro-Caribbean communities as a bastion of cultural nationalism and Pan-Africanism. Composer, arranger and multi-instrumentalist Gonzalo Grau breathes new life into Ismael Rivera hits in new arrangements for a stellar ensemble, created specifically for this concert. In conjunction with the conference “Rethinking the Afropolitan: The Ethics of Black Atlantic Masculinities” on Oct. 19-21.
Arts Transcending Borders 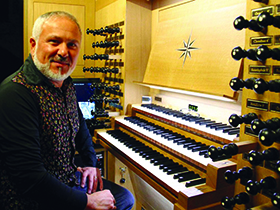 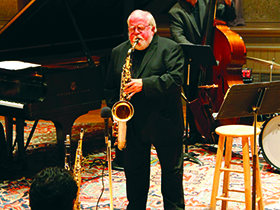 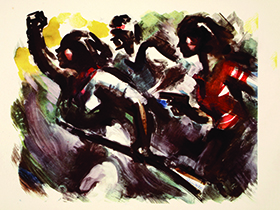 Nov. 2–4 & 9–11 | 8 p.m.
Fenwick Theatre – 2nd Floor O’Kane
“Fuente Ovejuna”
This classical work of the Spanish Golden Age by Lope de Vega is a tale of love, loyalty and self-sacrifice in a small Spanish village terrorized by a dictator. Spurred on by the women, the villagers rise up and exact revenge upon their tormentor. This production, a collaborative initiative by the departments of theatre and Spanish, sets the play in the midst of the Spanish Civil War, using the music and dance of that period to dramatize oppression and resistance in difficult times. Directed by Edward Isser, professor of theatre.
Ticket box office: 508-793-3536
Department of Theatre and Department of Spanish 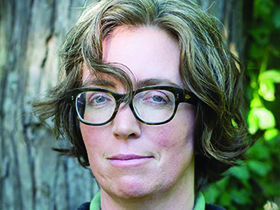 Nov. 2 | 7:30 p.m.
Rehm Library, Smith Hall
Reading by Gabrielle Calvocoressi
Meet Gabrielle Calvocoressi, the author of three poetry collections, including “The Last Time I Saw Amelia Earhart,” “Apocalyptic Swing”, and “Rocket Fantastic.” Editor at large at the Los Angeles Review of Books, and co-curator of the digital maker’s space, Voluble, she teaches at the University of North Carolina at Chapel Hill.
Creative Writing 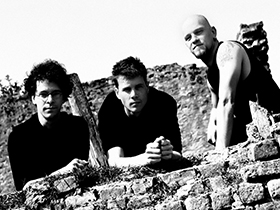 Nov. 2 | 8 p.m.
Brooks Concert Hall
Thelema Trio
Praised as “perfectly communal“ (Sequenza 21), the Thelema Trio seeks to expand the meaning of chamber music in the 21st century. Their performance style, which complements classical training with a shared love of classical, jazz, and rock, has inspired the creation of dozens of new works from an international roster of composers. Consisting of Ward De Vleeschhouwer on piano, Peter Verdonck on saxophones, and Rik De Geyter on clarinets, the Thelema Trio formed within the buzzing walls of the Belgium Royal Conservatory of Music in 2003. The trio has appeared as featured guest ensemble at important new music venues in Europe (Artuatu Festival), South America (Lima Contemporary Music Festival), Japan (International Clarinet Festival), and the USA (Bowling Green New Music and Art Festival). The program will feature “Sequenza IXa” by Italian avant-garde master Luciano Berio as well as premieres by Lucien Posman (Belgium), Francis Ubertelli (Canada) and Chris Arrell, associate professor of music.
Department of Music 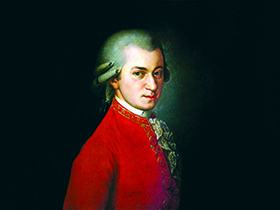 Nov. 14 | 8 p.m.
Brooks Concert Hall
“Mozart” Artists-in-Residence Concert
Mozart’s maturity and emotional depth are wonderfully apparent in the intimate setting of his chamber music works. This all-Mozart program includes some of these masterpieces, and features students of the Department of Music in collaboration with Holy Cross’ Artists-in-Residence.
Department of Music 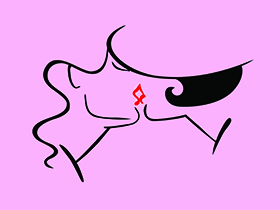 Diana Son’s poignant and funny play focuses on Generation X-ers growing up and leaving their twenties behind. Callie and Sara meet in New York City at the turn of the millennium. Sara wants to change the world; Callie simply wants to get by. They could be best of friends or even something more — if only they could make a decision. But making that decision isn’t easy and may even cause dangerous repercussions. An Alternate College Theatre production directed by Alexis Rappaport ’19.
Ticket Box Office: 508-793-3536
Department of Theatre

Dec. 5 | 4 p.m.
Brooks Concert Hall
Student / Faculty Recital
Students of the music department will perform individually and in chamber groups along with their faculty at our end of semester recital.
Department of Music 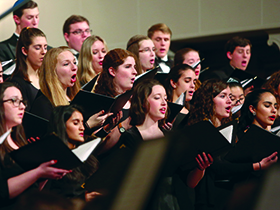 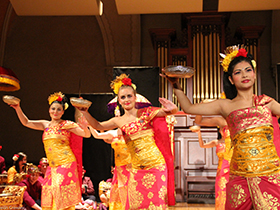 Dec. 8 | 8 p.m.
Brooks Concert Hall
Gamelan Gita Sari Concert
Under the direction of I Nyoman Catra, one of Bali’s most renowned master artists of traditional dance/theatre, our Balinese dance and Gamelan students collaborate with guest artists in both fall and spring concerts. Always a highlight of our season and a treat for all ages, the Balinese dance concert provides an opportunity for the community to experience the awe and wonder of the sacred art of Bali.
Department of Music and Department of Theatre

Dec. 10 | NOON
The Pit – O’Kane 37
One-Act Festival
Student directors are given the opportunity to showcase their work in the round-robin presentation of a series of fully-produced short plays featuring student actors. The One-Act Festival highlights the talents of up-and-coming young artists on campus.
Department of Theatre