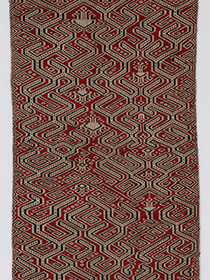 Aug. 31 – Dec. 14
10 a.m.-5 p.m. M-F, Noon–5 p.m. (Sat.)
Iris and B. Gerald Cantor Art Gallery, O’Kane Hall
“Woven Power: Ritual Textiles of Sarawak and West Kalimantan”
Professor Susan Rodgers, Guest Curator
Pua kumbu are magnificent, intricately dyed, hand-loomed cotton ikat textiles once woven as religious objects par excellence by the Iban and the related Dayak peoples who produced them in Southeast Asia. They were said to be full of powerful spirits and designed to be extraordinarily beautiful to attract the attention of the gods and invite them to draw near to human ceremonies. Over decades, emeritus Tufts University engineering professor John Kreifeldt amassed a comprehensive collection of pua kumbu, sungkit wraps, and kain kebat skirts from Sarawak and West Kalimantan, with examples from the 1800s – 1940 period. Kreifeldt is the primary lender and a collaborator to the exhibition—never before displayed, beyond a few textiles, in any museum. Fieldwork anthropological essays by curator Susan Rodgers will accompany the exhibition. “Woven Power” is Rodgers’ fifth exhibition of Southeast Asian textiles at Cantor Art Gallery. 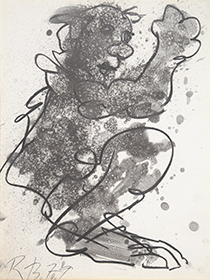 September - December
10 a.m. - 5 p.m., M-F, noon-5 p.m. (Sat.)
Cantor Art Gallery Resource Gallery, O’Kane Hallway
Robert Beauchamp: Works on Paper
The Iris and B. Gerald Cantor Foundation Resource Gallery will feature a selection of works on paper by Robert Beauchamp (American, 1923-1995), recently gifted to the College by his widow, Nadine Valenti Beauchamp. Beauchamp spent much of his professional career in New York and was known as a figurative painter with ties to the New York School and Abstract Expressionism. He was a prolific artist and educator who taught at Brooklyn College, School of the Visual Arts, Cooper-Union, and the Arts Students League of New York.

Sept. 1, 7:30 p.m.
Rehm Library, Smith Hall
Faculty Reading
Join us as we kick off the year with a Holy Cross faculty reading by Oliver de la Paz, a poet who is the newest member of the creative writing program and English department, and Stephanie Reents, associate professor of English and a fiction writer.
Sponsored by Creative Writing.

Sept. 7, 5:30–7:30 p.m.
Cantor Art Gallery, O’Kane Hall
Opening reception – “Woven Power: Ritual Textiles of Sarawak and West Kalimantan”
Professor Susan Rodgers, Guest Curator
Pua kumbu are magnificent, intricately dyed, hand-loomed cotton ikat textiles once woven as religious objects par excellence by the Iban and the related Dayak peoples who produced them in Southeast Asia. They were said to be full of powerful spirits and designed to be extraordinarily beautiful to attract the attention of the gods and invite them to draw near to human ceremonies. Over decades, emeritus Tufts University engineering Professor John Kreifeldt amassed a comprehensive collection of pua kumbu, sungkit wraps, and kain kebat skirts from Sarawak and West Kalimantan, with examples from the 1800s – 1940 period. This exhibition has never before been displayed, beyond a few textiles, in any museum. Fieldwork anthropological essays and comments by curator Susan Rodgers. 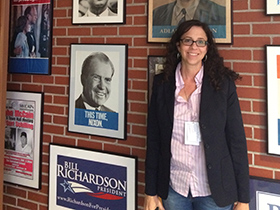 Sept. 15, 7:30 p.m.
Rehm Library, Smith Hall
Conversation with Beth Reinhard from The Wall Street Journal
Hear the Barrett Professor in Creative Writing of the English department, Leah Hager Cohen, in conversation with Beth Reinhard, who is covering the presidential campaign for The Wall Street Journal. Reinhard will share stories from this year's astonishing election season as well as address how the essential elements of storytelling — from a strong lede to pacing to the well-chosen detail — work in journalism. Reinhard previously covered politics for the National Journal and the Miami Herald.
Sponsored by Creative Writing. 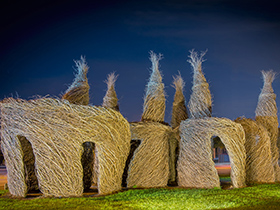 On view beginning Sept. 23
Linden Lane lawn, main campus entrance
“Stickwork,” Patrick Dougherty
Arts Transcending Borders Fall 2016 artist-in-residence Patrick Dougherty bends, weaves and flexes locally sourced saplings into architectural sculptures which are unique to the setting, and dynamically relate to the landscape and built environment around them. With the help of volunteers, Dougherty will create one of his whimsical stickworks on the Linden Lane lawn by the main entrance to the Holy Cross campus. Over the last 30 years, Dougherty has created more than 250 stickworks for museums, colleges, cities and parks around the world. His sculpture has been seen worldwide — from Scotland to Japan to Brussels, and all over the United States, and locally at the Peabody Essex Museum in Salem, Mass. In August and September, Holy Cross and Tower Hill Botanic Garden will both welcome Dougherty to our region, commissioning the first stickworks in central Massachusetts.
Co-sponsored with Tower Hill Botanic Garden, Environmental Studies Program, Cantor Art Gallery, and the Department of Visual Arts
Photo: “Out in Front,” 2013, by Patrick Dougherty, at the Sarasota Museum of Art in Sarasota, Fla. Photo by Dick Dickinson

Oct. 25, 8 p.m.
Brooks Concert Hall
Holy Cross Chamber Players
Mark Kroll, Harpsichord and Carol Lieberman, violin
J.S. Bach Through the Eyes and Ears of Mendelssohn, Moscheles, and Schumann
This program will consist of Bach's famous “Chaconne in D minor” for unaccompanied violin as arranged for violin and piano by Felix Mendelssohn and Robert Schumann; and three preludes from Bach's
“Well-Tempered Clavier,” as arranged for violin and piano by Ignaz Moscheles.

Oct. 27, Noon
Brooks Concert Hall
Musical Border Crossings: A lunchtime lecture-demonstration with excerpts from "Othello in the Seraglio"
Composer Mehmet Ali Sanlikol and members of the Dünya Musicians’ Collective offer a glimpse into the diverse musical influences and styles in "Othello in the Seraglio," with performances on Oct. 27 and 28.

Oct. 27, 7:30 p.m.
Rehm Library, Smith Hall
Reading by Mary Morrissy
Meet Mary Morrissy, the author of acclaimed fiction including her “The Rising of Bella Casey” (2013), “The Pretender” (2000), “Mother of Pearl” (1996), and the short story collection “A Lazy Eye” (1993). The interlinked short stories in her most recent work, “Prosperity Drive” (2016), have been lauded for their "brilliantly acute observation of every sort of detail" and the work as a whole described as "impressive and so thoroughly enjoyable" (Irish Times).
Co-sponsored by the Edward Callahan Support Fund for Irish Studies and the Jenks Chair of Contemporary American Letters. 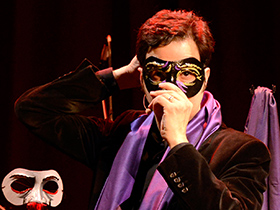 Oct. 27, 28, 8 p.m.
Brooks Concert Hall, Fenwick Hall (Arts Transcending Borders)
“Othello in the Seraglio: The Tragedy of Sümbül the Black Eunuch”
A coffeehouse opera produced by Dünya.
With 11 musicians and a storyteller, “Othello in the Seraglio” is scaled to the intimate, informal setting of a coffeehouse in 17th-century Istanbul (Constantinople). The storyteller spins out a well-known tale, an historically-based legend of love and jealousy, intensified by the crossing of boundaries between the free and the enslaved, white and black, Muslim and non-Muslim, East and West. 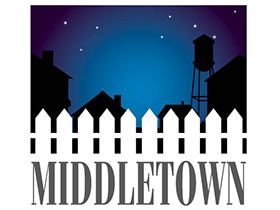 Nov. 3, 4, 5, 10, 11, 12, 8 p.m.
Fenwick Theatre, O’Kane Hall 2nd floor
“Middletown,” by Will Eno
If “Middletown,” a seriocomic play by central Massachusetts native Will Eno, seems familiar, that's because it could take place in your town, in your neighborhood or on your own front porch. You might recognize the neglected pregnant woman, the hapless handyman, the unrepentant bum or the librarian as old as the town itself. Eno's play gives us a snapshot of where we are right now by inviting us to spend time with a group of people who are both mundane and extraordinary — and all lost somewhere in the middle of their lives. Professor Scott Malia directs the Fenwick Theatre production of this extraordinary tale about contemporary American life. 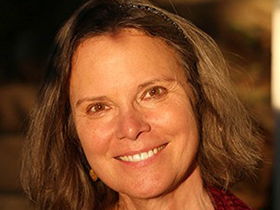 Nov. 10, 7:30 p.m.
Rehm Library, Smith Hall
Reading by Carolyn Forche
Listen to renowned poet and editor Carolyn Forché read from her work. Forché is the author of four books of poetry. Her famed international anthology, “Against Forgetting," has been praised by Nelson Mandela as “itself a blow against tyranny, against prejudice, against injustice.” In 1998 in Stockholm, she received the Edita and Ira Morris Hiroshima Foundation for Peace and Culture Award for her human rights advocacy and the preservation of memory and culture. She is currently at work on a memoir of her years in El Salvador, Lebanon, South Africa, and France.
Co-sponsored by the McFarland Center for Religion, Ethics and Culture at Holy Cross, the Gregory Stockmal Fund, and the Worcester County Poetry Association. 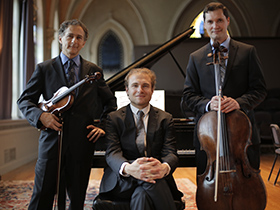 Nov. 17, 8 p.m.
Brooks Concert Hall, Fenwick Hall
Artist-in-Residence Concert
Featuring Brooks Scholars
An artist-in-residence concert, “Gods, Prophets, and Precious Little Things,” is a poetic juxtaposition of grand personas and simple beauties in works by Haydn, Kurtag, Schumann, Wolf, Liszt and Dvorak. The capacity of music to touch one's core with the most simple gesture as well as to evoke grand and complex sound worlds, within their respective musical languages and re-defining these boundaries, has been at the heart of composers' writing throughout time. The performers' challenge is to communicate the range of this expressive palette with depth and imagination. This event will feature the talent of students of the music department in collaboration with its artists-in-residence.

Nov. 29, 4 p.m.
Brooks Concert Hall, Fenwick Hall
Student/Faculty Recital
Students of the music department will perform along with their faculty at our end of semester recital. Students will individually perform music by various composers as well as in chamber groups. 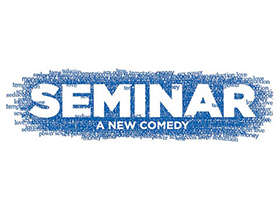 Dec. 1, 2, 3, 8 p.m.
Dec. 3, 4, 2 p.m.
Fenwick Theatre, O’Kane Hall 2nd floor
“Seminar,” by Theresa Rebeck
Four aspiring 20-something writers meet weekly in an Upper West Side apartment to show their work to a celebrated editor and get his response — which mostly comes in the form of devastating, hilarious put-downs. Theresa Rebeck’s glittering dialogue made this uproarious hard-boiled comedy the toast of Broadway. “Seminar” is an Alternate College Theatre production directed by Emma Callahan ’18. 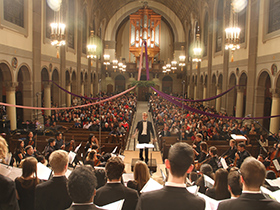 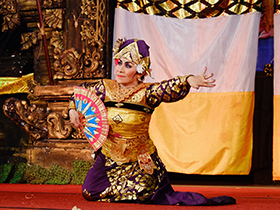 Dec. 9, 8 p.m.
Brooks Concert Hall, Fenwick Hall
Gamelan Gita Sari Concert
Holy Cross welcomes back the gifted I Nyoman Catra, who was with us when we initiated our Balinese performing arts program. As always, our Balinese dance and Gamelan students collaborate with guest artists.

Dec. 11, Noon
The Pit, O'Kane Hall, Room 37
One-Act Festival
Student directors are given the opportunity to showcase their work in the round-robin presentation of a series of fully-produced short plays featuring student actors. The One-Act Festival highlights the talents of up and coming young artists on campus.