Check out the dynamic arts performances and events that Holy Cross has lined up. 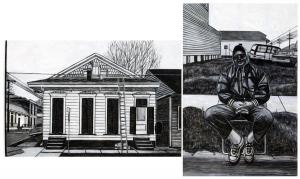 Sept. 2–Oct. 10, 10 a.m.–5 p.m.
Cantor Art Gallery, O’Kane Hall
“Katrina Then and Now: Artists as Witness”
“Part I: Documenting, Describing, and Dealing with Disaster”
Featuring work by artists, current and past, from New Orleans: Willie Birch, Sandy Chism, Dawn DeDeaux, Sklar Fein, Generic Art Solutions, Jeffrey Marshall, Bonnie Maygarden, Malcolm McClay, Michael Pajon, Gina Phillips, Maxx Sizeler, and Robert Tannen. This year marks the 10th anniversary of Hurricane Katrina, an event of tragic proportions for the city of New Orleans, when levees failed and the resulting floodwaters took lives and brought destruction that left behind irrevocable change. Drawing, film, installations, painting and sculpture will highlight art as a way of making sense of social disruption, art as a tool to document disaster, and the importance of art and culture for rebuilding communities in the aftermath of disasters. The exhibition, presented in two parts, will offer a series of artists’ talks, films and special events throughout the semester.
Cantor Art Gallery 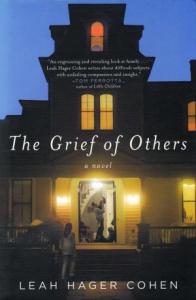 Oct. 21, 3 and 7 P.M.
Seelos Theatre, Kimball Hall
“The Grief of Others”
View the new feature film which premiered at the Cannes Film Festival last spring. Then hear stories from behind the scenes in a discussion with Professor Leah Hager Cohen — on whose novel the film is based — and also with Patrick Wang, the screenwriter and director.
Creative Writing Program, Barrett Chair in Creative Writing, Arts Transcending Borders, Seelos Film Series

Oct. 24
The Pit, O’Kane Hall
“For colored girls who have considered suicide/When the rainbow is enuf”
Ntozake Shange
Shange’s award-winning poetic drama is an unflinching yet uplifting recounting of the struggles and aspirations of African-American women.
Department of Theatre

Nov. 5, 7:30 P.M.
Rehm Library, Smith Hall
Reading by Rafael Campo
Hear poems about healing, the body, and the complications of identity by a writer and physician who has authored four books of poetry, most recently “Alternative Medicine,” and two volumes of essays.
Creative Writing Program, Health Professions Program 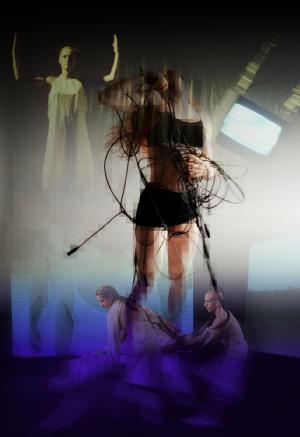 Nov. 7, 6 p.m.
Cantor Art Gallery
"In Conversation With Jazz Master Terence Blanchard"
As part of a weekend (Nov. 7-8) that also features his Grammy-winning "A Tale of God's Will (A Requiem for Katrina)" in concert at the College of the Holy Cross, multiple Grammy-winning trumpeter, bandleader and composer Terence Blanchard joins Daina Cheyenne Harvey, assistant professor of sociology and curator of the "Katrina Then and Now: Artists as Witness" exhibition, in a conversation about his hometown New Orleans, Hurricane Katrina and the artistic response in the aftermath of the disaster. Free and open to the public. Reservations are required, space is limited. Reserve your seats online.
Arts Transcending Borders 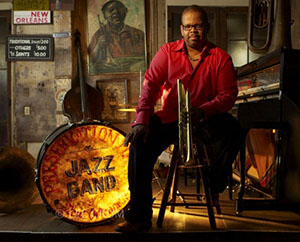 Nov. 8, 3 p.m.
Brooks Concert Hall
Terence Blanchard Quintet
“A Tale of God’s Will: A Requiem for Katrina”
Celebrated jazz trumpeter and composer Terence Blanchard brings his Grammy-winning project "A Tale of God’s Will: A Requiem for Katrina" to Holy Cross to mark the 10th anniversary of Hurricane Katrina. Originally conceived as the score to Spike Lee’s HBO documentary "When the Levees Broke: A Requiem in Four Acts,” the expanded suite offers a poignant meditation on the devastation in the aftermath of the hurricane. The Blanchard Quintet is joined on this occasion by the Berklee Jazz in Film Orchestra, conducted by Stefan Asbury. The event is presented in conjunction with the Cantor Art Gallery’s “Katrina Then and Now: Artists as Witness” exhibition. The event is free, but reservations are required (open seating). Reserve your seats online. Please note that capacity is limited, and reservations unclaimed by 2:45 p.m. will be released.
Arts Transcending Borders

Nov. 10, 8 P.M.
Brooks Concert Hall, Fenwick Hall
Suzanna E. Waldbauer Memorial Concert
Music of the French Baroque
Holy Cross Chamber Players
Carol Lieberman, baroque violin; Mark Kroll, harpsichord. These are descriptive pieces that delighted audiences from the court of Louis XIV. The first half will feature pieces for solo harpsichord from the Ordres of François Couperin “Le Grand.” On the second half of the concert, Carol Lieberman and Mark Kroll will perform Simon LeDuc, Sonata in D Major and J.S. Bach, Sonata in c minor. The LeDuc is relatively unknown, while the Bach is famous. Both these works have been recorded by the Lieberman-Kroll duo.
Department of Music 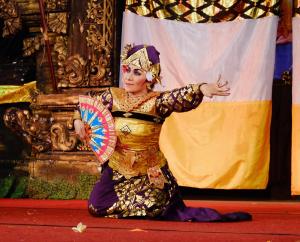 Arts Transcending Borders (ATB), in association with the Department of Theatre, welcomes Troika Ranch as artists-in-residence in fall 2015. Comprised of collaborators Mark Coniglio (composer/media artist) and Dawn Stoppiello (choreographer/media artist), Troika Ranch is recognized worldwide as pioneers of interactive performance. Over their 20-year career, they have produced 13 major works that integrate live performance with cutting-edge interactive technology, much of which they invented themselves. Their work has been acknowledged with a New York Downtown Dance “Bessie” award and a prize at Ars Electronica and numerous other honors.

Troika Ranch’s hybrid performances unite dance, theater and new media, and aim to question the deepening entanglement between human beings and new technology. In 2009, at the end of a two-year development process, Troika Ranch premiered “loopdiver,” a live, avant-garde multimedia dance work that interweaves looped choreography, music, interactive visuals and lighting in an effort to explore the challenges of breaking free of the loops and patterns people encounter in everyday life. Their next major work-in-development, “SWARM,” will come to life in collaboration with Holy Cross students and faculty at the culmination of their residency. See the Theatre section for more information about “SWARM.”

Troika Ranch will take full residency at the College from September through mid-November.

In the fall of 2015, the Department of Theatre, in association with Arts Transcending Borders, hosts the guest residency of Troika Ranch, an arts organization that creates contemporary, hybrid artworks, exploring the interface between dance and technology. Troika Ranch, working with faculty members and students, will present “SWARM,” the world premiere of a new piece about the seemingly random behavior of creatures in the natural world. SWARM promises controlled chaos as viewers become participants and the line between audience and performers is blurred and reordered.

Other highlights of the fall semester include a capstone production of Ntozake Shange’s “For colored girls who have considered suicide/When the rainbow is enuf,” directed by Rebekah Dowdell ‘16, and the Alternate College Theatre’s production of Steve Martin’s adaptation of Carl Sternheim’s “The Underpants,” directed by Savannah Plante ‘16. In addition, Holy Cross welcomes a pair of new masters of the Balinese performing arts, I Nyoman Windha and I Gusti Agung Ayu Warsiki. Under their direction, students of Balinese dance and the gamelan, joined by special guests, will offer the traditional fall concert, one of the most anticipated events of the semester.

This year marks the 10th anniversary of Hurricane Katrina, an event of tragic proportions for the city of New Orleans, when levees failed and the resulting floodwaters took lives and brought destruction that left behind irrevocable change.

Daina Harvey, assistant professor of sociology and anthropology at Holy Cross, grew up in and around the city until the age of 14, then in 2010 he moved back to help rebuild homes and work on community projects in the Lower Ninth Ward with a consortium of nonprofits, community groups, and academics. He lived and worked there for 14 months while writing his dissertation for Rutgers University about the rebuilding efforts.

“One of the things that interested me, though I didn’t have time to do anything with it while I was there, was how much ‘new’ art and artists I kept running into. When I arrived at Holy Cross to teach in 2012, I met Professor Susan Rodgers, a member of my department, who inspired me to curate an exhibition as a way of exploring how artists responded to Katrina,” explains Harvey.

In 2014 he spent seven weeks in New Orleans developing contacts with artists, gallery directors, and curators and found the community very supportive. “Katrina Then and Now: Artists as Witness,” will focus on the relationship between Hurricane Katrina and visual art in New
Orleans from 2005 to the present.

Drawing, film, installations, painting and sculpture will highlight art as a way of making sense of social disruption, art as a tool to document disaster, and the importance of art and culture for rebuilding communities in the aftermath of disasters. The exhibition, presented in two parts in the Cantor Art Gallery, will feature the work of artists, current and past, from New Orleans: Willie Birch, Sandy Chism, Dawn DeDeaux, Sklar Fein, Generic Art Solutions, Jeffrey Marshall, Bonnie Maygarden, Malcolm McClay, Michael Pajon, Gina Phillips, Maxx Sizeler, and Robert Tannen.

A series of artists’ talks, films, and special events will be offered throughout the semester.

The Creative Writing Program, housed within the Department of English, fosters a vibrant community of writers on campus. Each year, it hosts the Working Writers Series, offering readings, panel discussions, Q&A sessions, and book signings with authors like Junot Diaz, Mary Jo Salter, and John D’Agata. The series opens each September with a reading by faculty — this year, novelist Morris Collins and writer Leila Philip — and ends by celebrating the work of graduating students. In between, it sponsors visits throughout the year by acclaimed poets, essayists, memoirists, and fiction writers. There are special events, too. This fall’s schedule includes screenings of “The Grief of Others” (based on Professor Leah Hager Cohen’s novel), followed by discussion with the film’s director (Oct. 21), and a lively panel featuring authors of books either for or against football (Dec. 3).

Any student may take courses in Creative Writing, though you must major in English to earn certification. Classes emphasize particular genres — poetry, fiction, nonfiction — as well as special topics like screenwriting or science writing and opportunities to work individually with faculty. Students also edit “The Purple,” an annual literary magazine, and participate in readings, contests, trips, and events organized by the Creative Writing Club.

Gamelan Gita Sari presents two performances a year at Holy Cross of distinctive Balinese music and colorful dance to capacity audiences. Balinese Gong Kebyar music and dance is known for its dynamic and lightning speed and I Nyoman Windha, one of Bali’s most venerated composers, will be sure to delight audiences with his new compositions as well as material from the standard repertoire.

On Oct. 20 at 8 p.m. in Brooks Concert Hall, Fenwick Hall, student recipients of the prestigious Holy Cross Brooks and Organ scholarships join Artists-in-Residence Saul Bitran (violin), Jan Müller-Szeraws (cello), and Adam Golka (piano) for an evening of art song, piano duets, and chamber music spanning three centuries. Featured on the program, sponsored by the Department of Music, is the Holy Cross premiere of “Grave, metamorphoses for cello and piano,” by international acclaimed Polish composer Witold Lutosławski (1913-1994). In true chamber music fashion, cello and piano are equal partners, each contributing to the perceptibly logical development of several prominent melodic fragments cast in a quasi-tonal language of shimmering harmonies. Sharp outbursts of rumbling chords and penetrating repeated notes pierce the musical texture as the composer leads us to an inevitable climax built on rising pitch and rhythmic saturation. Reaching its climax, the music transcends the registral gravity of its beginning and the intellectual gravitas of its compositional techniques to become more than the sum of its musical parts, reaching what philosopher E.T.A. Hoffman describes as the unknown realm of absolute music — a world unique onto itself “with nothing in common with the surrounding outer world of the senses.”