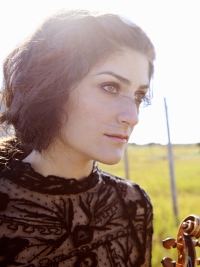 M.M. Juilliard School and a B.A. in English and Comparative
Literature from Columbia University

Violinist and composer Michelle Ross is unique as both a solo artist and collaborative visionary. She is in demand as a soloist, chamber musician, collaborator, and guest concertmaster all around the world. Her debut album Discovering Bach: Complete Sonatas and Partitas of J.S. Bach was recently released by Albany Records. In 2015, Michelle performed a pop-up Bach cycle of the complete Sonatas and Partitas for 33 days all around NYC, and her contemporaneous blog was featured by Alex Ross of the New Yorker. Michelle is the recipient of the 2012 Leonore Annenberg Fellowship Fund.

Michelle began the 2018-19 season with a performance of the Bach Double Violin Concerto for the opening night gala of the San Francisco Symphony, with Michael Tilson Thomas and her lifelong teacher, Itzhak Perlman. Michelle had her Carnegie Hall debut with Harry Bicket in 2013, and notable highlights include play/directing the Orchestre de Chambre de Paris, leading the inaugural Lucerne Festival Alumni Orchestra tour with Riccardo Chailly in Switzerland and Germany, leading the Mahler Chamber Orchestra, and performing as guest concertmaster with Teodor Currentzis’ MusicAeterna. An active proponent of contemporary music, Michelle is a member of NYC-based sinfonietta Ensemble É chappé , and guests with the International Contemporary Ensemble (ICE).

A dedicated chamber musician and curator, Michelle has toured extensively with Itzhak Perlman and Musicians from Marlboro , collaborates with Mitsuko Uchida and Dénes Várjon, as well as members of the Juilliard, Guarneri, and Cleveland String Quartets. Michelle was an artist at the Marlboro Music Festival from 2011-2014, and has toured with Musicians from Marlboro since 2012. In 2014, Michelle founded Music in the Mountains , an annual chamber music festival atop Powder Mountain, in Eden Utah. In 2016, she also launched Chamber Music at Eleventh Street Arts , in close collaboration with visual artists at the Grand Central Atelier in NYC.

As a composer and improviser, Michelle is extremely interested in creating multimedia and collaborative works, and was awarded a New Music USA grant, and the Emerging Composer Award. An improviser on both the violin and piano, Michelle also creates live immersive works with electronics. Her work toured with the Aspen Sante Fe Ballet for three seasons, and Michelle has had premieres in Baryshnikov Arts Center, the Joyce Theater and in Lincoln Center's Beyond the Machine Festival, and internationally in Berlin and the Philippines.

Michelle holds a M.M. from the Juilliard School and a B.A. in English and Comparative Literature from Columbia University, where she studied in the Columbia/Juilliard joint degree program. She has studied with Dorothy DeLay, Itzhak Perlman, Catherine Cho and Ronald Copes.