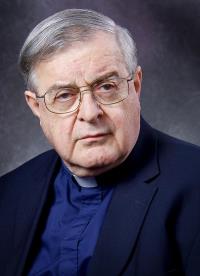 Vincent A. Lapomarda, associate professor emeritus of history, has been at Holy Cross since the start of 1969. A native of Portland, Maine, he graduated from Cheverus High School, the Jesuit high school in that city, in 1951. Entering the Society of Jesus later that year, he earned a bachelor's (1957), master's (1958), and licentiate degree (1965) from Boston College.

In 1968, Fr. Lapomarda became the first Jesuit to earn a doctorate in history from Boston University. Having taught at Boston College High School (1958-61), he was ordained a priest by Richard Cardinal Cushing of Boston on June 13, 1964.

The author of at least twenty books and many scholarly articles, book reviews, and letters to editors on different subjects, Fr. Lapomarda has served as the college's coordinator of the Holocaust Collection and of the Italian American Collection. His websites deal with such subjects as Sebastian Râle, the Jesuit martyr of New England in the eighteenth century; Major Persecutions of the Catholic Church in the Twentieth Century; in addition to Catholics and the Holocaust, and other subjects.

At the same time, Fr. Lapomarda has been involved in fraternal organizations as evident in his work as the College's former chaplain of the Knights of Columbus, the former state historian of the Massachusetts Knights of Columbus, and as the chairman of the committee on historical memorials of the International Order of Alhambra. He is also a Knight of the Equestrian Order of the Holy Sepulchre of Jerusalem, a member of the Honorable Order of Kentucky Colonels, a fifty year member of the american Historical Association, a member of the Angelo Giuseppe Roncalli International Committee, and of the Worcester Italian-American Cultural Center.

The Jesuit Heritage in New England (1977)

The Boston Mayor Who Became Truman's Secretary of Labor (1995), and Charles Nolcini (1997)

The Catholic Church in the Land of the Holy Cross (2003)

A Bibliography of the Published Writings of Vincent A. Lapomarda (2004),

A Century of Judges of Italian Descent in Massachusetts (2005).

Journal of Church and State

The Encyclopedia of the Irish in America

The Encyclopedia of American Catholic History

Letters to The Boston Globe